For the last few days, I've been testing the Beta version of 'Destiny' on the PlayStation 4. Before the Beta went offline today, I leveled a couple characters up to level 8 (the current level cap for the Beta). The first is a female Titan (pictured sleeping below), quite often smashing in the faces of the Fallen (when awake), and the second as a male Hunter, popping off sniper shots from afar.

The character creation tool offers a great deal of customization options. There are three races to choose from as well as a multitude of color options when it comes to skin, hair, eye, lip and markings color. While it's a bit less complex than the face editors in 'Skyrim' or 'Mass Effect 3', there's enough to keep you busy for a few minutes. However, it's also pretty simple to dive right into the game as well if you don't care about the look of your character. 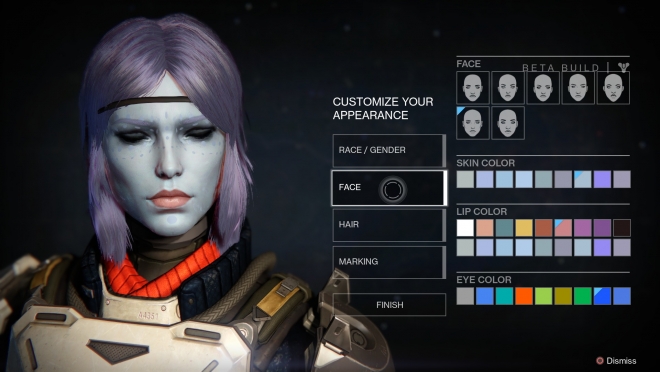 Anyway, here are a few thoughts about what I've experienced so far. Check out our impressions of the Xbox One version of the beta here.

Loot is Plentiful and Easy to Manage

One of the aspects of the 'Borderlands' franchise that I both love and hate at the same time is the sheer depth of available loot. It's wonderful to pick through, but a massive time suck to constantly organize and sell at vendors. Bungie has found a much more appropriate way to handle loot, specifically in the way the inventory system is built.

While the volume of loot is relatively high for the typical FPS game, there's a massive amount of storage available and getting rid of items is a simple as "dismantling" an item at any point in the game. Thankfully, you don't have to visit a vendor to sell off excess junk or old gear. It only takes a couple seconds to dismantle an item and the player is paid a little bit of the game currency (Glimmer) for the trouble. 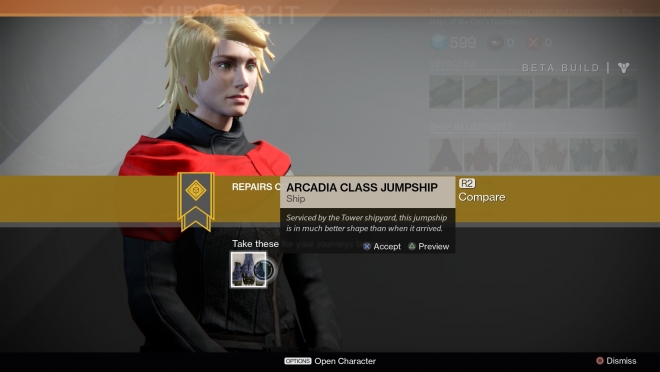 In addition, comparing items is a breeze. All you have to do is hover over the item with the on-screen mouse to compare stats. Items can be quickly swapped out, excellent when you earn a new piece of armor or a new firearm. The same goes for weapon special abilities and the character ability management system. Bungie's development team has gone a long way to make this RPG aspect of the game completely accessible to FPS gamers.

I noticed myself getting progressively more annoyed about the load times, basically when waiting for my ship to leave orbit and fly to new maps. Part of the issue is there's no visual, on-screen loading indicator showing the Bungie servers connecting me up with a specific in-game world containing other players. 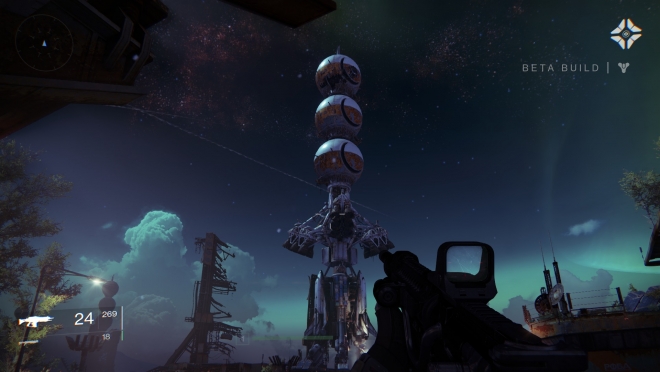 While Bungie shows a user count when connecting to a co-op game or a vs. Crucible match, there's nothing on-screen that shows how long it's going to take to connect to a standard level map that's shared with other players. I'm hoping that the load time issues could be Beta related, but it's possible that it's simply indicative of the time it will take to match up with other players already in-game.

That being said, the enormity of the map size makes the lengthy load time somewhat forgivable. When you are wandering around the giant maps, especially the large free roam map of Russia, you are going to love the fact that everything is fluid and continuous, basically free of additional load times.

I kept telling myself that this wasn't Halo, but so many aspects of 'Destiny' reminded me of 'Halo'. Things like the floating robot AI sidekick, weapon designs, enemy reactions, vehicle handling, etc... Of course, the troubling aspect of the Beta is the vague Sci-Fi narrative just scrapes along with endless blather about the Darkness and the mysterious Fallen enemies of our super-friendly, giant floating planet that did supposedly great things like triple the lifespan of humans. (Which incidentally sounds horrible if the aging process is slowed from birth to death. What new parent wants to take care of a baby that stays a blubbering infant for three years?! I bet they can't wait until Junior starts kindergarten 15 years later.) 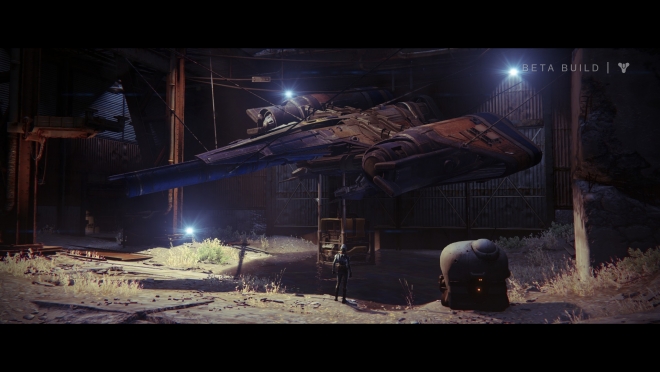 I realize that Bungie is trying to keep the story under wraps prior to the launch of the game, but there's very little to get excited about right now. I absolutely love a good single player story and there's not much to be found up to this point. Obviously, it's difficult to accurately judge the narrative without experiencing the entire story (as well as the cliffhanger to make way for the inevitable sequel), so I'm keeping an open mind.

Teamwork is Surprisingly Excellent, but Communication is Crippled

Many times during the Beta, I found myself outnumbered in a firefight only to be saved by someone nearby that either tore through the entire group of Fallen or distracted them enough for me to move forward. I also loved the number of times that a co-op teammate would revive me during a Strike. I often found myself actively scanning for dead teammates in order to return the favor. 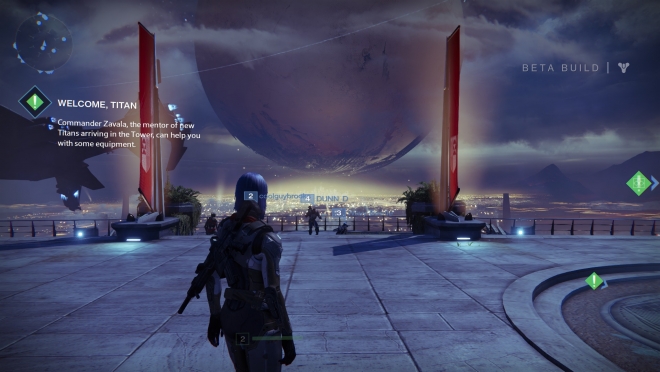 Unfortunately, voice communication is incredible limited. Both the Strike missions and the team-based PVP matches don't offer the ability to voice chat after matchup. You have to be in a fireteam before you start the mission to have voice chat active. Its somewhat frustrating to attempt to strategize part of a co-op mission or retake a specific flag when you can't talk directly to your teammates. Gestures (waving, sitting, pointing) are also useless since there's nothing that's combat specific in the mix.

The entire party invite process just to activate voice chat is horribly clunky for a FPS. I realize Bungie wants to eliminate you having to listen to packs of hyperactive 12-year-olds scream curse words that you didn't know existed or brag endlessly about last night's lascivious acts with your mother, but there has to be a better way to handle voice chat. Something as simple was requiring someone to be on your friends list may work. I'm hoping there will be some expanded voice chat options for anyone that's in a clan for the open world missions, perhaps similar to 'Grand Theft Auto V'.

It looks Better Than any PS4 FPS to date

While anyone with a solid gaming PC has already experienced this level of visual depth and beauty in games, I haven't seen it on the PlayStation 4 during the first nine months of the console's release. While still a multi-platform release with the PS3 edition (limited to 720p) and the Microsoft consoles, Bungie has done a great job showing off a bit more of the PS4's graphical abilities (at 1080p resolution). 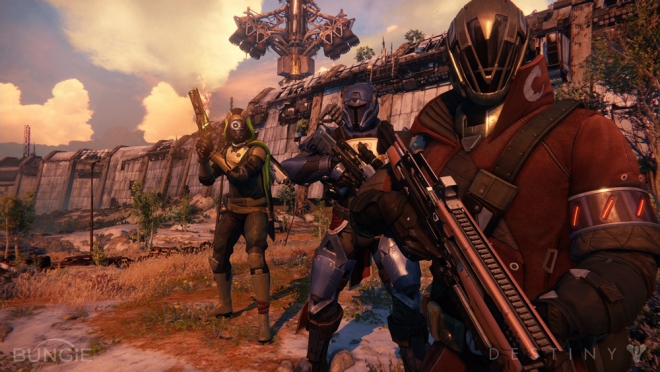 The visual effects, particularly the lighting, have been improved marginally from the Alpha, but the biggest differences can be seen when comparing the PS4 version against the PS3 version. Dualshockers has an excellent side-by-side comparison of the two versions if you want to see how the visuals are different on the PS4. Basically, the improvements include better draw distance, more vivid colors, sharper textures, etc... The only downside is the locked in framerate at 30fps as opposed to 60fps, but it really doesn't influence gameplay significantly and everything runs smoothly in the Beta.

It really doesn't matter what type of map you are moving through, the enemy AI is smart and works together to take you down. Enemies will advance in large packs and retreat when numbers are dwindling. Enemies will also take cover when appropriate as well as flank the position of the player. Because of this intelligence, many of the tight maps can lead to interesting firefights and tense situations. I also liked the game function that disables respawns for certain sections, thus adding to the tension of the game even more. 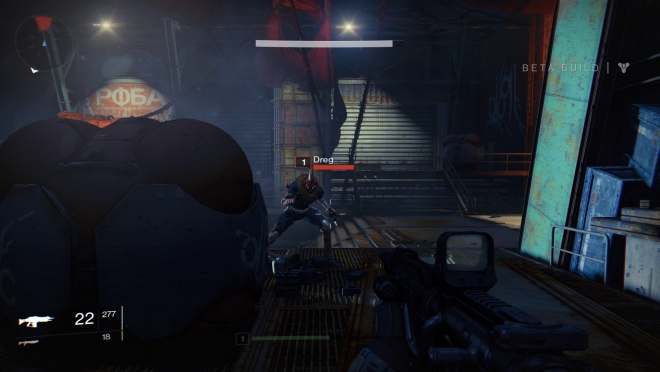 Regarding scaling, Bungie has done an excellent job of spawning enemies that are level appropriate on the surface of the planet and almost super-powered in the dark, underground recesses of Earth. It's often a good idea to head into dark areas with friends in order to take on high-risk, high-reward targets. It's obvious that enemies will scale evenly throughout the game just as the player will scale up with new gear and advanced fighting abilities.

However, the one downside to enemy scaling is the lack of cohesiveness when level-wide events occur. For instance, one of the events in the Beta occurs when Fallen airships drop giant drills and a large number of troops into Russia to mine the Earth for resources. If the event spawned for anyone else other than you, the enemy scaling could be vastly higher or lower than your level. That being said, if you participate in the event, you can still earn loot and a ranking for the event.

The Voice Work Isn't As Bad As People Say It Is

So much has been written about Peter Dinklage's flat performance of AI robot buddy Ghost. It's been improved considerably in the Beta, namely due to the additional robot sound effects that are inserted sporadically between Dinklage's lines and the slight robotic auto-tune effect that's modified his voice. I actually didn't realize that it was Dinklage's voice until a few minutes into the game due to the recent changes. It sounded futuristic and authentic to me. 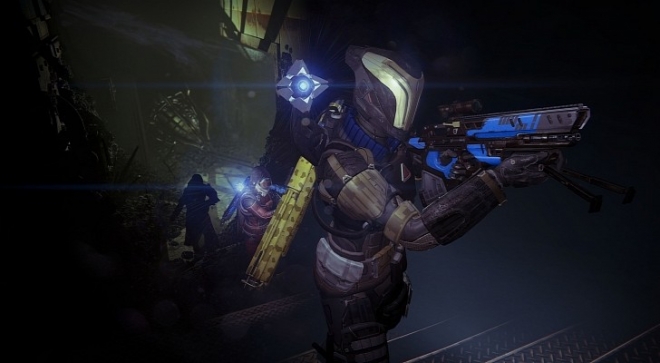 Besides Lance Reddick (The Wire, Fringe), you are going to hear a few new voices around the City Hub such as Nathan Fillion (Castle, Firefly) and Gina Torres (Suits, Firefly). I really didn't have any problem with line delivery from any other character. Of the three, I actually prefer Reddick's deep, serious voice for the Titan class. It fits extremely well with the direct, fierce class design and sets the stage well for upcoming missions.

To be honest, I had little interest in playing 'Destiny' after briefly messing around with on the E3 show floor, but that's changed with the Beta. While I'm still on the fence when it comes to the quality of the narrative, I'm really impressed with the tense nature of the firefights, the accessibility of the RPG elements and the entertainment value of the co-op campaigns. I even enjoyed the team-based Crucible multiplayer mode and I really don't care for multi-player modes in FPS games. In other words, the Beta convinced me to preorder. You should check it out for yourself to see if you feel the same way.

If you are also interested in preordering, you can find a comparison of the various special editions here: Limited Edition vs. Ghost Edition vs. Digital Guardian Edition