Joining the company's previously announced curved-screen 105-inch UHD display, Samsung has unveiled a new bendable model at its IFA press conference. The massive LCD TV is capable of changing from flat to curved to suit the customer's preference.

"We're at the helm of a new era in TV viewing – an era driven by the curve: a simple yet powerful design ethos that greatly enhances the viewing and overall sensory experience," said HyunSuk Kim, Executive Vice President of the Visual Display Business at Samsung Electronics. "IFA 2014 marks an exciting time to share the power of the curve with the world to bring the Curved TV into the mainstream and highlight its impact on the household viewing experience and TV market as a whole." 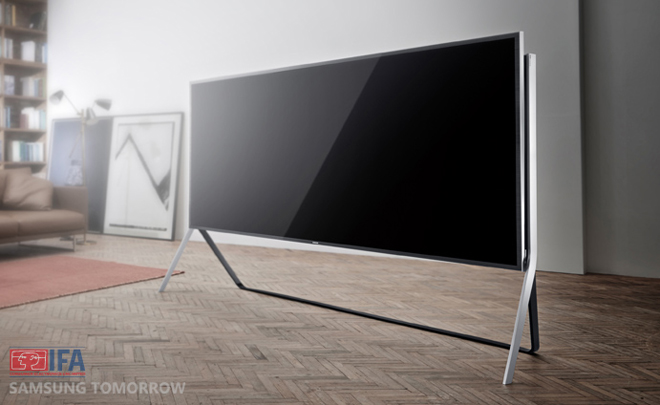 The 105-inch bendable 4K TV features an extra-wide 21:9 aspect ratio with a resolution of 5120X2160. Using a specially designed mechanism, the screen can switch from flat to curved with a curvature of 4200R. In addition, the display offers UHD Dimming and UHD Upscaling for superior contrast and picture enhancement.

Pricing and availability have not been detailed yet, but the company's fixed curved-screen 105-inch model retails for $120,000. Samsung's 105-inch bendable Ultra HD TV is now on display at IFA in Berlin. A similar 78-inch bendable model was recently released in Korea.