In addition to writing the weekly updates that announce new titles added to the service, I also actually, you know, use VUDU instant streaming to watch movies too. In fact, VUDU came in very handy on Halloween night earlier this week, when Mrs. Z and I got a hankering to watch Tony Scott’s ultra-stylish 1983 vampire flick ‘The Hunger’. You can’t get it on Blu-ray or Netflix streaming, but VUDU has the movie in 1080p now.

The gorgeous Catherine Deneuve stars as millennia-old vampire Miriam Blaylock, whose origins go back to ancient Egyptian times. David Bowie plays John, her companion, living as her husband. Although Miriam is immortal, her progeny have a clock that expires after a few hundred years, at which time they begin aging at an astronomical rate. John’s clock is just about up, and Miriam, despite genuinely loving him, can do nothing to save him. 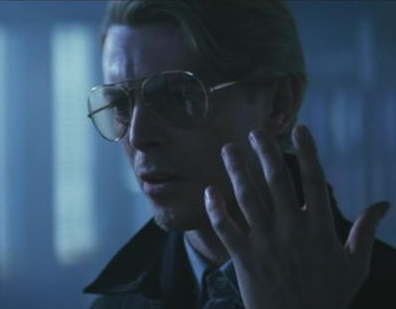 John and Miriam seek the assistance of medical researcher Sarah Roberts (Susan Sarandon), who has been experimenting on monkeys to find a “cure” for aging, which she considers a disease that attacks the human body. Of course, Sarah knows nothing of vampires, and her research is only in the formative stages. Is it too late for John, and if so, is Miriam ready to create a new companion?

‘The Hunger’ was based on a novel by Whitley Strieber (the ‘Communion’ alien abduction crackpot). As I recall, the book had better fleshed-out plot and character backstories, which are stripped to a bare minimum here. Entire chapters of the novel are condensed into fragmentary, enigmatic flashbacks, many only lasting a second or two. Neither the book nor movie ever actually uses the word “vampire.” The characters live for centuries and feed on human blood, but don’t have fangs or turn into bats. They can be photographed, will cast reflections in mirrors, and walk around in sunlight without problem.

This was the feature film directing debut for Tony Scott, who (along with brother Ridley) came from a background making television commercials. At the time of its release, the film was widely criticized as little more than a 97-minute music video. I don’t think that’s fair. After all, the Scott brothers’ work largely influenced the look of music videos in the 1980s in the first place. ‘The Hunger’ actually has a rather fascinating mix of old and new styles. The architecture and production design reflect the characters’ ages and their centuries of collecting objects that they consider meaningful. Yet the film’s structure, glossy photography and experimental, rapid-fire editing are very modernist. The soundtrack is equally dominated by Classical music (Schubert’s “Piano Trio,” which also played a big part in Stanley Kubrick’s ‘Barry Lyndon’, is a repeated theme) and ’80s New Wave bands like Bauhaus (who appear in the opening scene, performing at a night club). 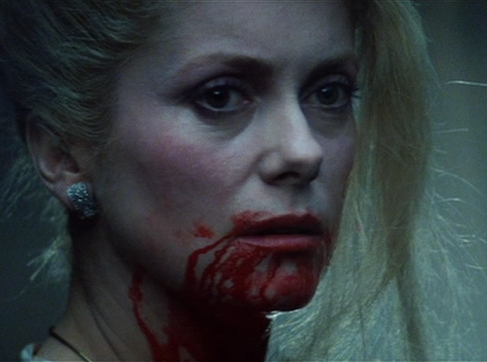 There’s no denying that ‘The Hunger’ is an ’80s movie. It’s flashy and superficial, and the story’s ending doesn’t make a damn bit of sense, but it’s also very stylish and just plain cool. The movie is plenty violent and bloody (no sparkly teenage vampires here), and has a famously hot lesbian sex scene with Deneuve and Sarandon. Don’t blink, or you might miss walk-on supporting roles from Willem Dafoe and John Pankow. And yes, that’s Dan Hedaya from ‘Cheers’ as a detective investigating the disappearance of one of John’s victims.

‘The Hunger’ was released on DVD back in 2004, but hasn’t turned up on Blu-ray yet. At the time of this writing, Netflix only has the DVD for rental, and no streaming availability at all. If you want to watch the movie in high definition, VUDU is the best option. The 1080p “HDX” stream is presented in the movie’s full 2.40:1 aspect ratio, but only Dolby 2.0 mono audio. (The original sound mix was monaural; MGM has not remixed it.) The video is obviously sourced from an older HD master, likely the same one used on the DVD. It’s pretty soft on the whole (the movie’s hazy photography probably doesn’t help), but has acceptable detail, certainly better than DVD. Film grain is present but poorly resolved. Colors are pretty decent (Scott loves moody blues in this one), as is shadow detail despite the very contrasty images. Minor dirt and film damage pop up on occasion. Fortunately, there doesn’t appear to be much digital manipulation going on here, but the movie could use a new scan. The audio is also a little strident, and some of Deneuve’s dialogue is unclear. The mono mix obviously has no surround activity, but also basically no low end.

I’d eagerly welcome a remastered Blu-ray. In the absence of that, this VUDU HDX stream is perfectly watchable.