How cold you possibly have an ’80s movie without a boom box, Uzis and some bad ’80s music? Well, this sci-fi horror comedy has them all – plus zombies! Sci-fi horror comedy seems like an unlikely genre, but the ’80s were an unlikely time. Unfortunately, 1984 didn’t know what to do with this gem, which was released to a quiet murmur of box office activity, taking in a grand total of just over $14 million. 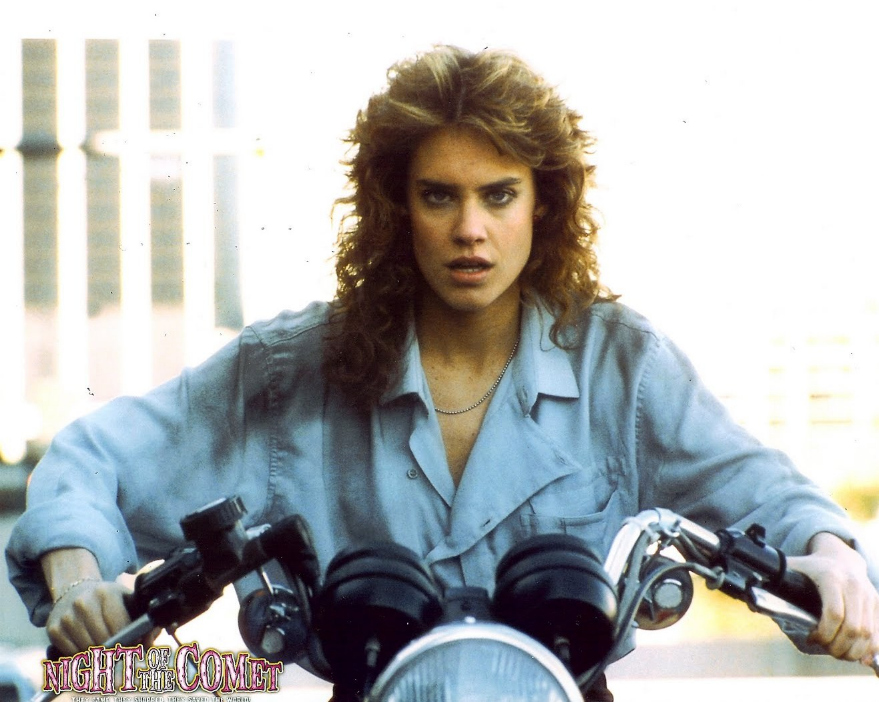 The basic plot of ‘Night of the Comet’ is that a comet, one that hasn’t passed this close to the Earth in millions of years, is totally going to pass close to the Earth… at night. Los Angeles is a radical party scene, wild with anticipation of the comet’s arrival. Our main characters, two teenage sisters and Hector, manage to miss it altogether. The morning after, folks have either been turned to dust or have become zombies. It would appear that being behind steel walls kept the effects at bay. How one gets affected is bit unclear, however, seeing that our heroes pretty nonchalantly escape certain doom while others aren’t so lucky. There aren’t many surprises as the plot cooks along, but ultimately the end, and entire experience, is satisfactory.

The cast and crew are stocked with folks who, for the most part, have kept busy in the industry right up until today. Older sister Regina is played by the very cute Catherine Mary Stewart, whose perfect ’80s hair was also featured prominently in ‘The Last Starfighter‘ just before this flick. Hector is played by Commander Chakotay (Robert Beltran), and one of the scientists who shows up later in the film is Michael Bowen of ‘Kill Bill‘ fame. (“My name is Buck, and I like to…”) Another notable star is Mary Woronov, the female Tim Thomerson, a busy actress from the ’60 still making movies today.

She has appeared in TV and movies both large and small, including oldies but goodies like ‘Silent Night, Bloody Night’ and ‘Death Race 2000’, to 2005’s ‘The Devil’s Rejects’. I’ve just now noticed that her character’s name in a flick called ‘Prison-A-Go-Go!’ is Dyanne She-Bitch Slutface. I may have to investigate that one further. The most notable crew member is writer/director Thom Eberhardt, whose directorial credits stretch from Keanu Reeve’s fifth feature film, ‘The Night Before’, to ‘Gross Anatomy’ and ‘Captain Ron’. Take that as you will.

How does the film look streamed in HD? Not all that great. Everything is a bit murky and the overall image is very soft. There isn’t a lot of fine detail. Coupled with the comet’s permanent reddening of outdoor scenes, colors are inconsistent. They’re often washed out and very ’80s looking. Blacks are occasionally deep, but mostly smudgy. I’d say that despite it being streamed in 1080, this certainly wouldn’t look any worse if you watched it on DVD. Oh well, I suppose that looking the way it does will help take you down that ’80s memory lane.