Warning: This movie contains blood, breasts and beasts – the all-important “three Bs” of the slasher/exploitation/grindhouse genre. This fairly new yet un-Blu-ified documentary explores what Roger Corman and other “B” movie pioneers did in the Philippines.

The following copy from the film’s web site sums it up pretty nicely: “This is the ultimate insiders’ account of a faraway backlot where stunt men came cheap, plot was obsolete and the make-up guy was packing heat!”

Director/documentarian Mark Hartley follows up his excellent ‘Not Quite Hollywood: The Wild, Untold Story of Ozploitation’ with this tribute to Roger Corman and his colleagues’ adventures filming in the Philippines. While ‘Machete Maidens Unleashed’ isn’t quite as tight as ‘Not Quite Hollywood’, it’s a ton of fun and a must see for any fan of Corman or the genre.

The documentary was released just last year and gives viewers a no-holds-barred look into the sleazy, bloody and naked world of the drive-in/grindhouse industry of the 1960s and ’70s, when the filmmakers discovered that the Philippines was an extremely cheap location to shoot exploitation movies. They could hire a crew member for $5 a day. The stuntmen were fearless, the jungle exotic and the lovely ladies easy to talk out of their clothes. Aside from a handful of archived clips, most of the interviews were shot specifically for this documentary. 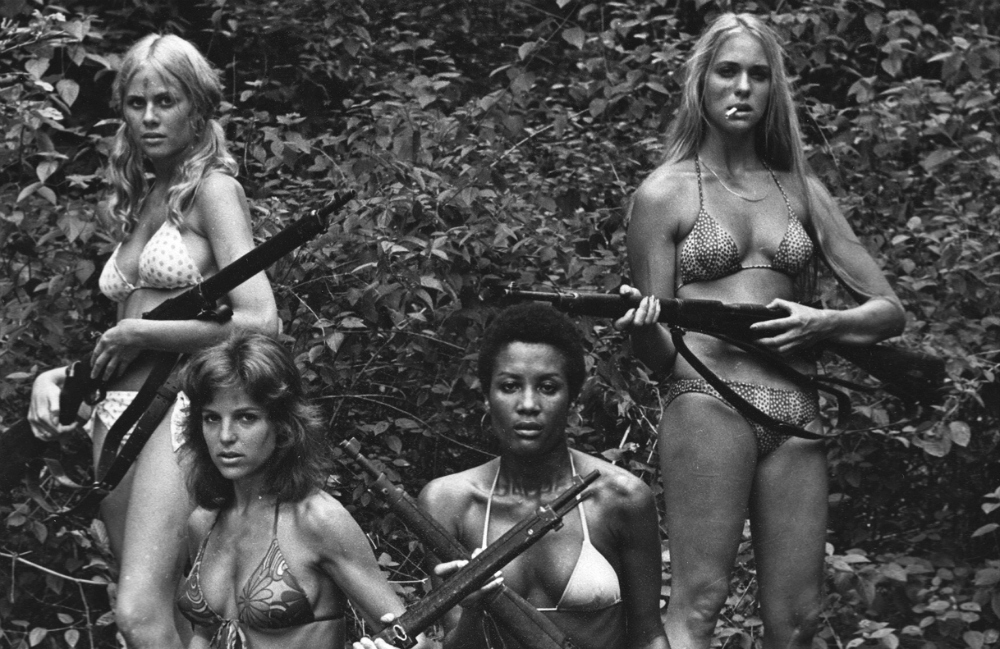 The interviewees are impressive: Roger Corman, John Landis, Jack Hill, Joe Dante, Jon Davison, many of the “maidens” and other actors such as R. Lee Ermey, Sid Haig and Dick Miller, plus an almost endless list of producers, editors and historians. Unfortunately, these interviews don’t seem to have much of an organized narrative other then a weak timeline approach that moves from topic to topic. The film seems mildly scatterbrained, but that doesn’t take away from the fun I had watching it. Some of the funniest lines I’ve heard in a movie this year were from the interviewers and some of the movie clips. Speaking of the clips, a wonderful amount of them are spliced in between interviewees who discuss their dodgy flicks – films like ‘The Big Doll House’, ‘Black Mama, White Mama’ and ‘Firecracker’. Be warned that there will be lots of naked ladies, cheesy gore and terrible dialogue.

How does it looked streamed in high definition? Pretty darn good. The interviewing shots are all pretty much the same: low lit, close up, dark clothing. These scenes look great. Flesh tones are perfect, blacks are deep, and there’s plenty of detail on the aged faces of these golden age filmmakers. The shots from the old movies look exactly like you’d expect them to look – like you were at the drive-in 50 years ago. I thought it might be jarring to flip back and forth between these two drastically different “high def” shots, but it perfectly underpins the nostalgia element.

I couldn’t find a trailer for the film that wasn’t chocked full of boobs and blood, so you’ll just have to watch this one… but NOT at work:

TagsMachete Maidens Unleashed Netflix One from the Vault Roger Corman