With Jim Abrahams and an all-star cast, how could you go wrong? In this week’s dig through the Netflix Vault, we wonder why only ‘Hot Shots! Part Deux’ is streaming in HD, but not its slightly funnier prequel. Here comes some prime pre-crazy Charlie Sheen.

‘Hot Shots! Part Deux’ follows the continuing adventures of Topper Harley (Sheen). The current events from the time of this film’s production are all addressed. It was 1993, just two short years after the first film was released. The Persian Gulf War had ended in 1991 and George H. W. Bush

had vomited on the Prime Minister of Japan. These goings on and many more, plus just about every conceivable popular movie, all get screen time goofing here. In the movie, it seems that the Iraqi military has captured U.S. soldiers, and several attempts to rescue them have failed. The only hope is to send in Richard Crenna, shamelessly spoofing his role in the ‘Rambo’ series, who is hesitant to go into battle without his best student, Topper Harley. Of course, Harley is busy living with monks, fighting for money and watching TV – not to mention that, “His war is over.” Crenna gets captured and Harley agrees to go in. Also in the plot is Topper’s lost love and his new gal, the CIA operative running the show now. All in all, there are some super funny parts and the gags hit more than they miss.

‘Hot Shots! Part Deux’ is a great joke-a-minute funfest from director Jim Abrahams (‘Airplane!’, ‘Top Secret’). It may even be a joke-every-15-seconds as this one holds no punches. Abrahams shares the writing credit with Pat Proft, who penned the likes of ‘Police Academy’ and ‘Bachelor Party’. The all-star cast includes Charlie Sheen, Lloyd Bridges, Richard Crenna, Rowan Atkinson, Miguel Ferrer and Valeria Golino. Sheen got pretty buffed up for the role and turns in a great performance. Lloyd Bridges is his typical AWESOME self and truly steals every scene he’s in. I said in the opening that the first film was better, but I’m wrestling with that since I really enjoyed both. 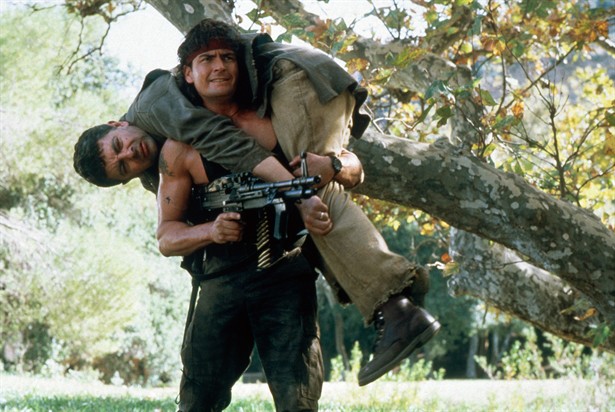 How does the Netflix HD stream look? Really, and rather strangely, inconsistent. Dark scenes don’t have a lot of detail. Colors can be a bit drab and the blacks murky. There is slight grain almost throughout the entirety of the film. You might think, as has been the case in many of these older films I’ve look at for the Vault, that daytime outdoor and well-lit indoor scenes would look much better. Sometimes they do and sometimes they don’t. There are scenes where the color, detail, flesh tones and blacks are truly high-def, and others that are almost fuzzy. This happens occasionally from shot to shot in a few scenes. It’s weird. I’ll have to rent the DVD to see if this is something I forgot from the film. The scenes that are great make up for the inconsistencies, but it’s occasionally distracting.

If you’re a fan of Lloyd Bridges, Charlie Sheen or Jim Abrahams, chances are you’ve seen this one already. If not, check it out on Netflix!