Early last week, a friend of mine mused, “Where the heck are the Thanksgiving movies this year?” Good question. None of the recent theatrical releases have a Thanksgiving theme that I can see. What about streaming? The choices there are pretty slim too.

So slim, in fact, that of all the “Top 10 Thanksgiving Movie” lists I found, only ‘Dutch’ showed up on Netflix streaming. Granted, there really aren’t a lot of Thanksgiving movies to begin with. That said, we got stuck watching ‘Dutch’ before the cooking madness began.

‘Dutch’ is a little movie about a broken home and a new boyfriend’s attempt to fit in, all the while helping a spoiled pre-teen come of age. Yeah, it’s a weird coming-of-age flick. Ed O’Neill stars as the new boyfriend to a mother with one kid and a rich ex-husband. The son is terribly spoiled and miserable that his mom and dad are separated. This Thanksgiving, the new boyfriend offers to go and pick up the little tyke at his exclusive boarding school and drive him home for the holidays. It’s a two-day drive that should be enough time to get to know each other and get into some predictable trouble, right? Sure is. This is not a good film. Despite O’Neill’s best comedic efforts, it fails at every turn. You never care about any of the characters, and the script is so slimly written that you can virtually see the grumpy-character-will-soon-turn-it-around checklist completed at every turn.

‘Dutch’ was directed by Peter Faiman. 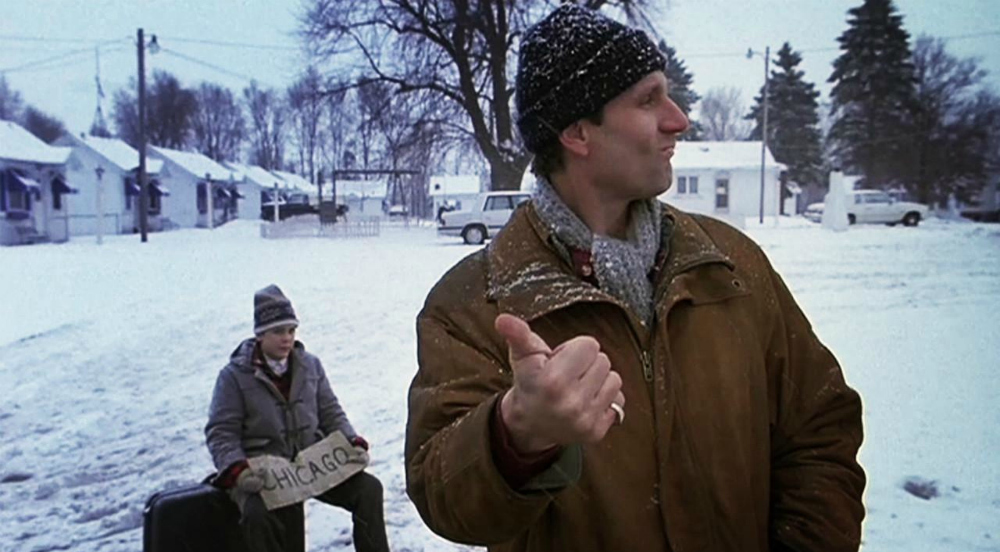 You may recognize that name, as his rise to fame was ‘Crocodile Dundee’. His fall from fame was ‘Dutch’. He has since retired to producing, where the only thing you might have seen is ‘Ferngully’. In a strange Thanksgiving twist of fate, producer/screenwriter John Hughes has written both my least-enjoyed Thanksgiving movie (this one) and my favorite of Turkey Day flicks: ‘Planes, Trains and Automobiles’. Hughes has had far more hits then misses… well, at least in the ’80s, when he wrote ‘Sixteen Candles’, ‘The Breakfast Club’, ‘Weird Science’, ‘Ferris Bueller’ and ‘Christmas Vacation’. Then he turned to kiddie stuff with four ‘Beethoven’ movies and four ‘Home Alone’ movies. Man, I’m beginning to think that ‘Dutch’ killed a lot of careers.

As for the actors involved, this flick was released in the middle of the successful run of ‘Married… with Children’. While Ed O’Neill was certainly garnering movie roles, none of them were terribly meaty. This marked a big change in Ed’s career with his first big starring appearance. Other actors include the mom from ‘Poltergeist’, the bad guy in ‘Happy Gilmore’ and ‘Iron Giant’, and Pee-wee Herman’s girlfriend from his ‘Big Adventure’.

How does it look in streaming? It looks about as good as the movie deserves. In other words, like crap. It has murky blacks, washed out colors and only the briefest of moments that display any detail. This one is actually set for release on Blu-ray in mid-January of 2012, so if you can stand the wait, you may be rewarded.

Needless to say, there was certainly some talent involved in this film. Unfortunately, the sum of its parts equals a really bad movie. In fact, the only reason I can think of to subject yourself to this film is if you’re a big fan of Ed O’Neil. It has some pretty good Ed, if you like that sort of thing. Otherwise, this miserable excuse for a holiday film should be skipped.

TagsDutch Ed O'Neil John Hughes Netflix One from the Vault