With this visit to the Vault, I thought that I’d try a flick I hadn’t actually seen before. Something funny, because I like the funny. How about something with at least a little star power? Maybe something from someone I’ve enjoyed in past films? What did I end up with? The non-‘South Park’ related movie from ‘South Park’ creators Trey Parker and Matt Stone: ‘BASEketball’. That’s a good choice, right?

Well, not exactly. You see, Parker and Stone only star in the film. While known for their clever writing and humorous voice work, I haven’t yet seen them shine in live action. Director David Zucker (‘Airplane’, ‘The Naked Gun’) co-wrote this one with three other writers. That’s ALWAYS a good indication of the quality of film you’re about to get into. I suppose I should have looked all this up, or even just watched the trailer (below), before turning on Netflix. Had I done so, I probably would have skipped this one. What’s even worse is that ‘Baywatch’ hottie Yasmine Bleeth was cast in a role requiring her acting talents. OK, now you know where this is headed. 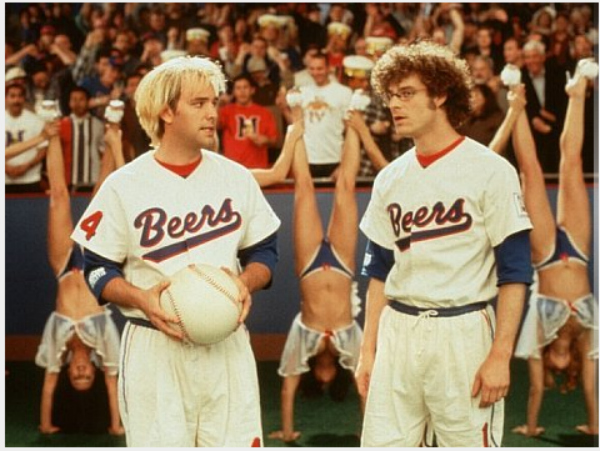 ‘BASEketball’ is a ten-jokes-a-minute story about two losers who, on the fly, invent a “sport” that they don’t have to be athletic to play. When two sporty jerks challenge Trey and Matt to a game of basketball, in order to win, they make up the rules as they go along. They use the rules of baseball combined with some from H-O-R-S-E to essentially make free throws count as hits (singles, doubles, home runs). Also, they’re allowed to “psyche out” the opposing team’s players as they attempt to make a shot. (Throughout the movie, this “rule” leads to the infrequent funny goof (“Steve Perry!”) and to many boring and/or unfunny ones (Matt lactating on a player).

They beat the challengers, basically by confusing them, and then in a matter of what amounts to a two-minute montage, ‘BASEketball’ becomes a neighborhood sensation. Texas billionaire Ernest Borgnine wants to take “BASEketball” to the professional level. But since this is a “Make fun of the greed of professional sports” movie, Trey and Matt will only consent so long as anyone can play and that the game will adhere to its driveway-borne roots. Of course, there’s a greedy rival team owner (Robert Vaughn) who moves in on Borgnine’s hot wife (Jenny McCarthy) after Borgnine chokes on a hot dog and dies. Borgnine wills the team to Trey and Matt, but only if they win the national championships. If they fail, the ownership rights revert to McCarthy. The “plot” is set in motion.

There are the standard million cameos you have come to expect from Zucker. In ‘BASEketball’, these include: Bob Costas, Al Michaels, Reggie Jackson, Tim McCarver and Robert Stack. All in all, the film has a few hardy laughs, and the opening segment is a really funny infographic on the world of professional sports. But other than that, ‘BASEketball’ is mean-spirited, overly-vulgar, and just not that funny despite machine gunning jokes at the audience.

So how does it look? Actually, really quite good! In a cruel twist of fate, this is one of the best-looking HD streams I’ve seen yet. Fine details are almost TOO good, as you can see exactly where Jenny McCarthy has applied cover-up makeup. Blacks are really deep and colors vibrant. Flesh tones are good, but can occasionally lean a little on the pink side. My only real complaint about this image is some mild video noise, especially in the sporadically too-hot whites.

Well there you have it, a Netflix streaming reference-quality dog of a movie.