Imagine ‘Alice in Wonderland’ without all that Walt Disney whimsy.  Instead, replace that whimsy with despair, the bright colors with different shades of brown and grey, and the funny and frantic animated White Rabbit with the motion captured movements of a stuffed one.  That’s Jan Svankmajer’s ‘Alice.’

Lewis Carroll’s stories of Alice have inspired a seemingly endless stream of film adaptations.  ‘Alice’s Adventures in Wonderland’ along with the sequel ‘Through the Looking-Glass and What Alice Found There’ are familiar to both children and adults in their many forms.

From the first direct interpretation in 1903 to the recent ‘Alice’-themed film by Tim Burton, the story, the characters, and the world itself have all changed dramatically.  Some movies attempt to maintain the integrity of the books, while others make changes.  Out of all of these, there has never been a version quite like Jan Svankmajer’s. 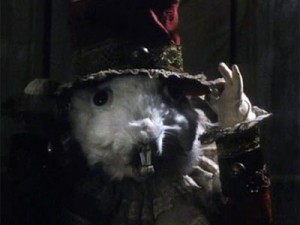 ‘Alice’ is a Czech film, originally released in 1988.  Svankmajer uses a combination of live action footage and stop motion animation to create his surrealist work.  The only human that appears in the film is the Kristyna Kohoutova, who plays the character of Alice.  In the English version of the film, her voice is provided by Camilla Power.

Without exaggeration, ‘Alice’ is one of the strangest films I’ve ever seen.  It’s a surrealist’s take on a story of literary nonsense, and both styles show through strongly.  It’s also one of those rare films that I actually get uncomfortable watching.

From the start, ‘Alice’ is decidedly different than the original story.  Rather than the somewhat whimsical beginnings of the Carroll version, Svankmajer’s film starts darkly, and ominously.  In fact, much of the film takes the already bizarre elements of the book and makes them threatening.

The film begins with an introduction from Alice and then jumps into a dark room full of preserved beetles, dead flies, animal skulls and at least one genuinely terrifying doll.  Alice is passing the time – playing would be too strong a word, since she never does seem to smile – by tossing stones into a teacup when a stuffed rabbit begins to move.

The rabbit frees himself from the confines of the glass display he’s been placed in and dresses himself before heading off.  Alice follows him, and the story goes in the usual direction from there.  Alice follows, and ends up in a strange new place.

One of the most interesting things about the Svankmajer ‘Alice’ is that the point at which Alice crosses into Wonderland isn’t defined.  Most adaptations make it a very clear and dramatic change, with an obvious visual difference between Wonderland and the real world.  ‘Alice’ doesn’t do that, and the viewer is left to wonder whether the normal world and the fantasy world are one in the same. 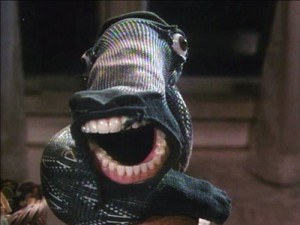 ‘Alice’ is a fairly disturbing film, though it may not be immediately evident why.  The White Rabbit is constantly restuffing himself, but so is the Scarecrow in ‘The Wizard of Oz.’ There are living animal skeletons with glass eyes and the horrifying sock with dentures that is the caterpillar,  but that’s not too far out, especially considering how calmly I can accept the intense gore in a film like ‘Saw.’

Where Svankmajer really succeeds in creating his unsettling imagery is in the subtleties.  Everything is dirty, for a start.  The White Rabbit’s fine clothes aren’t exempt; they’re grimy and look old and ignored.  At the Mad Hatter’s tea party, every cup looks like it’s been used over and over again without being washed.

The sound also contributes to the off-putting nature of the film.  There’s no music, for starters, and the only voice is that of Alice.  The sound effects are often exaggerated too.  Doors squeak loudly when opened, food and drink make very distinct noises when consumed, and footsteps ring out with clarity.  But most upsetting of all, there’s the sound of the White Rabbit’s bones creaking as he moves and talks.

No other version of the Alice story captures the nightmarish feel that Svakmajer’s film does.  It’s confusing and frightening, but part of what makes it so effective is that, from a certain standpoint, ‘Alice’ is strongly rooted in reality.  Everything in the film is, or is made of, recognizable objects.  A bed frame with bird feet on it may not be something you’ve seen before, but the ingredients are easily recognizable.

‘Alice’ isn’t presented on Netflix in high definition, but you won’t find it in HD anywhere else either.  It’s presented in the original 4:3 aspect ratio and with stereo sound.  The video quality could be better, but the DVD looks roughly the same and won’t be found for less than $15.  A Blu-ray version at this point seems unlikely.

If you’ve never seen the works of Jan Svankmajer, ‘Alice,’ his first feature length film, is a good place to start.  He has one more film available to stream on Netflix called ‘Littl 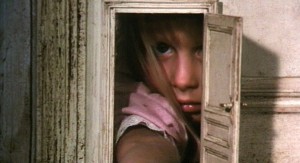 e Otik,’ which is just as strange, and another great example of his style.