As the ‘Twin Peaks’ pendulum swings wildly from one extreme to another, this week’s episode focuses heavily on the type of David Lynchian quirky comedy that has been in short supply through most of this revival series. It also spends way more screen time in Twin Peaks itself than previous episodes.

The episode sort-of addresses a complaint I made last week about why the cops in Twin Peaks haven’t put on a manhunt for Richard Horne after he ran down the little boy in the street. Richard opens the episode driving to the trailer home of Miriam, the girl who picked up coffee at the RR Diner and then witnessed the crime. They apparently know each other, and she’s terrified of him. Refusing to open the door, Miriam warns Richard that she already told the police that he killed the boy, though she doesn’t know why he hasn’t been arrested yet. She also says that she mailed a letter to Sheriff Truman telling everything she knows, stating that if anything bad happened to her, Richard would be to blame. This doesn’t deter Richard at all. He smashes in the trailer door and beats Miriam unconscious, then turns on her gas stove and lights a candle, leaving her to die in an explosion.

Richard then calls Deputy Chad. The most useless cop in Twin Peaks is revealed to be a good friend of Richard’s. Presumably, he’s managed to keep the details of Miriam’s phone call a secret from the rest of the cops. Richard demands that he also intercept the letter before the sheriff sees it.

This explanation isn’t entirely satisfying. A bunch of other people witnessed Richard kill the boy, and the truck he was driving was pretty distinctive. It should have easily led back to him whether Chad interfered or not. Even without that, all the cops should be canvassing the town looking for clues or witnesses. A crime like this would be the biggest thing going on in a sleepy town like Twin Peaks. Instead, the police don’t seem to be doing much of anything.

In order to distract Lucy, Deputy Chad puts on a show of lollygagging around the sheriff’s department, making small talk about the lovely weather. As soon as the mail carrier arrives, he manages to grab the letter, but Lucy is suspicious of his behavior.

Richard next drives to the house of his grandmother, Sylvia Horne (Ben Horne’s wife, or possibly ex-wife at this point). Poor mentally-disabled Johnny Horne, who smashed his own face into a wall the last we saw him, has been tied up and restrained at the dining room table, staring at a freakish teddy bear with a glass head and utterly terrifying mouth that keeps repeating the phrase “Hello Johnny, how are you today?” over and over again in a loop. Truly, nobody but David Lynch could ever come up with something as horrific as this. 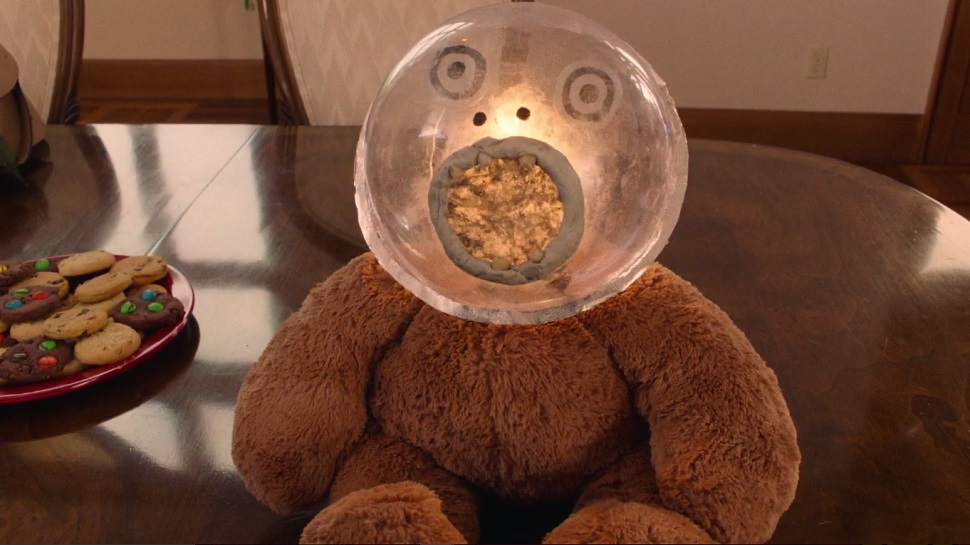 Even by the standards of some of the crazed psychopaths Lynch has created in the past, Richard Horne is a real piece of work. He storms into the house, screaming obscenities at his grandmother, demanding that she give him money. When she refuses, he slams her into a wall and strangles her until she tells him the combination to her safe. He then cleans out all of her cash, jewels and precious silverware before finally heading out.

Afterwards, Sylvia calls Ben to complain about their grandson, and insists that Ben pay her back for the money Richard stole. Ben doesn’t seem overly sympathetic. Upon hanging up, he asks his assistant Beverly (not seen) if she wants to have dinner with him.

This episode’s revelation that Richard is Ben and Sylvia’s grandson appears to confirm a fan theory that he must be Audrey Horne’s son (because I doubt Johnny has sired any children). If so, could Mr. C be the father? Richard and he have a lot in common.

The casino owners played by Robert Knepper and Jim Belushi are back, and we learn that they’re called the Mitchum brothers. They keep a trio of bimbo playthings named Candie, Sandie and Mandie around, mostly just to stand and pose in pink dresses and look listless in the men’s vicinity. Candie is quite a dim bulb. In a very drawn-out scene, she chases a fly around the house, and eventually clocks Rodney (Knepper) in the face with a TV remote while trying to swat it. She spends an excessive amount of time after that bawling her eyes out, long after Rodney’s anger has passed. Both Rodney and Bradley (Belushi) find her endlessly frustrating. A lot of humor is mined out of their exasperation at Candie’s inability to pay attention or follow even the simplest of instructions.

As she promised, Janey-E brings Mr. Jackpots to see a doctor about his odd behavior, but the doctor (John Billingsley, who has played countless roles like this) is just a GP. He checks Dougie’s heart rate and blood pressure, and congratulates him on losing a lot of weight. At seeing Mr. Jackpots without a shirt for the first time, Janey-E is startled and turned on by his fit physique. At this point, she loses interest in finding out what’s wrong with him.

The capture of hitman Ike the Spike is all over the TV news in Las Vegas, along with footage of Janey and Mr. Jackpots being interviewed by reporters. Dougie’s shady coworker Anthony (Tom Sizemore) is revealed to be working for Mr. Todd (Patrick Fischler), whose exact role has still not been defined but we know in turn works for Mr. C. Todd orders Anthony to meet with the Mitchum brothers and trick them into taking care of Dougie for him.

Anthony goes to the Mitchums’ casino and informs them that, because a recent fire at another of their casinos was ruled an arson, their $30 million insurance policy claim won’t be paid. He very explicitly blames this on Dougie, whom he claims has a personal vendetta against the Mitchums. “You have an enemy in Dougie Jones,” he rather unsubtly repeats several times for emphasis. The Mitchums recognize Dougie as the same Mr. Jackpots who inexplicably took them for a lot of money at their slot machines. Rodney orders that they set up a meeting with him, which is undoubtedly a euphemism for whacking him.

Albert goes on a date with Constance the coroner. Gordon and Tammy spy on them at the restaurant and find their attraction quite amusing.

That night in his hotel room, Gordon draws weird doodles on a piece of paper when he hears a knock at his door. He opens it and sees a vision of young Laura Palmer. He’s disturbed by this but shakes it off after a second. At the door is Albert, bringing information about the text history from Diane’s phone. He knows about the text from Mr. C, which he traced to Mexico. He also informs Albert that Diane responded with a coded message: “They have Hastings. He’s going to take them to the site.” Gordon of course finds this very troubling but doesn’t want to tip off Diane yet that he doesn’t trust her.

Tammy then arrives with a security camera photo showing that Mr. C was present at the scene of the New York City penthouse murders that opened this season.

At his trailer park, Carl Rodd (Harry Dean Stanton) sits outside, idly strumming a guitar and singing a song when a coffee cup smashes through the window of a nearby trailer. Inside, Becky (Amanda Seyfried) and her junkie boyfriend Steven (Caleb Landry Jones) have a huge blow-out fight over money and chores. These two are a mess.

Dr. Jacoby records a new podcast, ranting about nonsense conspiracy theories and hawking his gold-painted shovels. Nadine Hurley is an avid viewer. She exclaims, “He’s so beautiful.” It’s then revealed that Nadine has lived out her dreams, and is the proprietor of a shop hilariously called “Run Silent, Run Drapes.”

Jerry Horne is still lost in the woods.

The Log Lady calls Hawk again to deliver more cryptic clues, this time involving electricity. She ends by announcing, “Laura is the one.”

The episode wraps up once again at the Roadhouse. This time, Rebekah Del Rio, who made a memorable appearance in Lynch’s ‘Mulholland Drive’, takes the stage with Moby backing her up on guitar for a lengthy performance of a song called “No Stars.”

The image of Rebekah Del Rio standing on a stage in front of a red curtain while wearing a black-and-white chevron pattern dress is just about the most David Lynch-y thing ever. My feeling is that it’s a bit too heavy-handedly meta. I might find it amusing if it appeared in some other David Lynch project as a wink to ‘Twin Peaks’, but putting it in ‘Twin Peaks’ itself is too much.

The episode is chock full of other surreal or just plain odd moments that showcase Lynch’s perverse sense of humor. The bound and gagged Johnny Horne writhing on the floor while his grandmother is brutalized, forced to listen to that nightmarish teddy bear cheerfully ask him how he’s doing, is both hilarious and horrifying in a way only David Lynch can conjure. I’d prefer if some of the straight humorous moments (Mr. Jackpots losing his virginity, anything to do with Candie, etc.) were spread throughout the season rather than all bunched up in one episode. At the same time, this new ‘Twin Peaks’ is so frequently unrecognizable from the old show that I have to voice some appreciation for any episode that actually feels like ‘Twin Peaks’, and this one does.