Over the weekend, I prepared a bracket of 64 TV characters that will vie for ultimate supremacy in our TV Madness tournament. Which characters will kill and move on, and which will be left lying in pools of their own blood? That’s for you to decide. Before we start killing people off, let’s take a look at the field of 64.

I performed the seeding of the bracket in as scientific a manner as I could. Each character was assigned a number. I wrote the numbers 1–64 on a piece of paper, cut them out and pulled them two-by-two from a bowl. I know some people have a problem with this seeding technique because it sometimes pits two heavyweights against each other in the first round, but I honestly don’t have the time or energy to determine who should be Number One seeds and who should be the 16th seeds.

This year, I asked for your help in figuring out which characters I should include in the tournament. Thank you for all your suggestions. I implemented many of them to create a varied field of 64 characters spanning the history of television. Since there were so many options, I stayed away from adding more than one character per show, except for a couple of exceptions. I also stayed away from adding any animated characters, since using them in the Movie Madness tournament last year didn’t go over so well. Sorry to those of you who wanted Bender. I stuck with live-action characters this time around.

Before we get down to eliminating contenders, I wanted to take some time to dissect the tournament as it’s constructed. Below you can see the bracket. I’ve separated the four quadrants into easily recognizable sections using different TV technologies to differentiate them. For those of you new to this, each post will consist of one to two match-ups. Each match-up will have a poll where you can vote to determine which character will move on to the next round. The character with the most votes wins. During last year’s movie tournament, a tie-breaker (which was used once) went to the movie or franchise that had the highest domestic box office gross. This time around, we’ll have to do things a bit differently. In case of a tie, the win will go to whichever character had the longest running show by episode count. 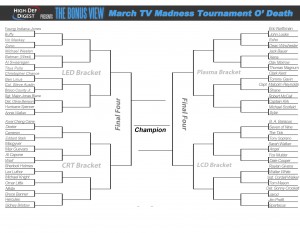 I knew going into the movie tournament that characters like Darth Vader, Batman and John McClane were heavy favorites that would probably go far in the tournament. It worked out that Vader and Batman met in the finals, with Vader ultimately taking the crown. Things are no different here. Some heavily favored characters have been included in this tournament as well.

With one quick glance, people will easily pick Jack Bauer out of the mix and wonder if anyone could beat him. Even though I had to include him in the tournament, I hesitated just a bit knowing that he starts out with a huge advantage over the other competitors.

We also have Cordell Walker from ‘Walker, Texas Ranger’. Everyone knows what mythical amazingness Chuck Norris is capable of, especially since we’ve been so inundated by those “Chuck Norris Defeats Everything” jokes. I wonder if people will forget the Norris hype and realize that there are quite a few capable competitors in this tournament that could put up a decent fight against him.

Other heavyweights include Hercules (dude is packing around god-like strength), Vic Mackey (a cop that can strike fear into the heart of any human being) and any of the various ‘Star Trek’ characters with huge fan followings.

I have a few dark horse picks that I think could go far in the tournament given the right circumstances. Omar Little (‘The Wire’) is the scariest drug dealer to ever walk the streets. If you don’t think he can take down a few of the big dogs, then you have another thing coming.

Dean Winchester from ‘Supernatural‘ kills things with special powers for a living. If he comes up against anyone with other-worldly powers, he’ll be more than adept at handling them.

My dark horse pick to go the furthest, if not win outright, is The Tick. I mean, he’s got superhuman strength and he’s too dumb to know when he’s beat. That’s a lethal combination right there. Plus, his crazy amounts of dumb luck will certainly come in handy.

The match-up featuring Al Capone from ‘Boardwalk Empire‘ (the only historical figure to be included in the tournament) and Worf is one that I’m looking forward to. Capone is nasty in ‘Boardwalk’, but can his nastiness meet the level of warrior spirit from the universe’s most famous Klingon?

I swear that this next match-up was picked out of the bowl without any sort of manipulation on my part. It just so happened that fate wanted us to get a first round match-up featuring two great minds. Many of the participants in this tournament have brawn, but a few have brains. No match-up is more brainy than Lex Luthor (‘Smallville‘) facing off against Sherlock Holmes (‘Sherlock‘). When I saw that match-up form, all I could think of was the infinite possibilities of head games these two would play with each other. Luthor is like a bald Professor Moriarty. It’s going to be awesome.

Thanks for joining us for our March TV Madness Tournament. This is going to be fun. Get your thinking caps on and try to figure out who would truly win in each match-up. I can’t wait to hear your reasoning.

As a special present, a play-in game will be announced in the next post. One character in the tournament has had a few TV-related incarnations. So, like the Batman and Bond playoffs last time, we’ll have a Clark Kent playoff. Stay tuned!