If you’ve seen your share of action movies, you’ve probably noticed a pattern. The plots follow one of just a few templates, and so do the characters. Even the dialog can seem like it’s picked out of some sort of handbook of bad clichés.

But hey, don’t get me wrong, I love action movies. Two of my top five favorite movies are ‘Jaws’ and ‘Jurassic Park,’ and they’re full of the same sort of tropes that make up most other action movies. It’s not that clichés are inherently bad. They’re a lot like digital effects. They need to be executed really well in order to work, and if you’ve got too many of them, they’ll lose their appeal.

#5. The Foreshadowing Phrase
“I got a bad feeling about this.” – Harrison Ford

It’s there in almost every action movie in the form of a “It’s quiet… too quiet,” or “This is going to hurt,” or even “Well that isn’t good.” It’s the thing our heroes say when they’re at the top of the metaphorical roller coaster and about to hit the first big hill. It usually hits right before an action sequence, and it can either be said seriously or ironically.

Though this line gets said plenty of times in ‘Star Wars,’ no one delivers it quite like Harrison Ford. Han Solo’s “I got a bad feeling about this” as the trash compactor begins to close in is the best of all the lines. Sure, it’s partially because it’s one of the first times the line was said, before it was done to death in the non-movie content. But it’s also because it just rolls off the tongue. It’s way less clumsy than “I have a bad feeling about this,” which is what the other characters say.

Don’t confuse this with the line that’s delivered right after everything goes wahoonie-shaped. Otherwise, this honor would have to go to Tim Rose for his delivery of “It’s a trap!” two movies later. 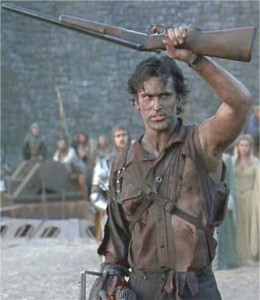 You just can’t beat Bruce when it comes to one liners. He’s gained a great reputation based almost entirely on his performance in ‘Army of Darkness.’ Sure, he was in the first two ‘Evil Dead’ movies as well, but every Ash Williams quote you hear comes from the third. And out of all the incredibly quotable kill lines in the movie, this is the best.

It comes right after a fairly comic scene which has our poor hero humiliated by his own doppleganger, which is important for two reasons. First off, it’s great to see Ash get his redemption. Secondly, that doppleganger was just plain annoying. I think I was as happy as Ash was when he finally took it out.

An honorable mention in this category goes to good ol’ Arnold, since he was so great with these in his early career. But sadly, due to the over use of post-kill puns in ‘Batman and Robin,’ he had to be disqualified.

Okay, so just to clarify, I absolutely cannot stand Shia LaBeouf. The fact that he’s somehow become the action movie go-to for my generation hurts every time I think about it. When guys like Bruce Willis and Jason Statham finally hang up their boots, LaBeouf is all that’ll be left. That frightens me to the core.

But LaBeouf does do one thing well; arguably better than anyone else in the business. When he tells people to move, he does it with panache. Rather than spouting out the typical “Go, go, go,” LaBeouf spouts the word so fast that it’s amazing a mic can even pick up the sound.

Anyone can spew a mouthful of technobabble, but it takes something special to break that down into something the audience can relate to. And it doesn’t matter if the simplification isn’t correct. It’s what Terry Pratchett’s monks of history would call “a useful lie.”

No one is faced with this task more often than Jeff Goldblum, and no one does a better job with it. He stutters, he hems and haws, and he gives the audience the impression that he’s making up the explanation on the spot.

Goldblum takes this one for his gropey explanation of chaos theory in ‘Jurassic Park’ alone.

#1. The Well Placed F-Bomb
“English, motherfucker, do you speak it?” – Samuel L. Jackson 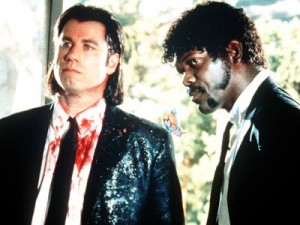 It may seem silly, but some actors just can’t pull it off. John Travolta is one of them. Did you see ‘The Taking of Pelham 123?’ It honestly seemed like he learned to curse just for that film. Maybe he doesn’t swear in his private life. Actors like Joe Pesci, on the other hand, can spout even the foulest speeches with an air of ease.

But there’s no one that can drop an F-bomb better than Samuel L. Jackson. ‘Pulp Fiction’ is a prime example of Jackson’s ability to deliver on this promise. Samuel L. Jackson uses the word “fuck” like an artist. Picking just one phrase seems disrespectful, but since I get the most use out of his brilliant speech from ‘Pulp Fiction,’ that gets the win.