My fourth day at Sundance was my most extensive movie day. I saw five films. I’ve come to find out that five movies in a day is my limit. Any more than that, they all start to just blend together. It’s harder to judge and critique when you’re seeing that many movies in a day. The films have no time to resonate with you before you head into another screening.

The five movies I saw were ‘Being Elmo: A Puppeteer’s Journey’, ‘Page One: A Year Inside the New York Times’, ‘Vampire’, ‘The Troll Hunter’, and ‘I Melt With You’.

This entire day was filled with press screenings, so I don’t have many interesting stories from premieres or filmmakers. It was a pretty hectic day, though. The minute I came out of one screening, I had to go get right in line for another one.

This is the tent they keep us caged in like cattle: 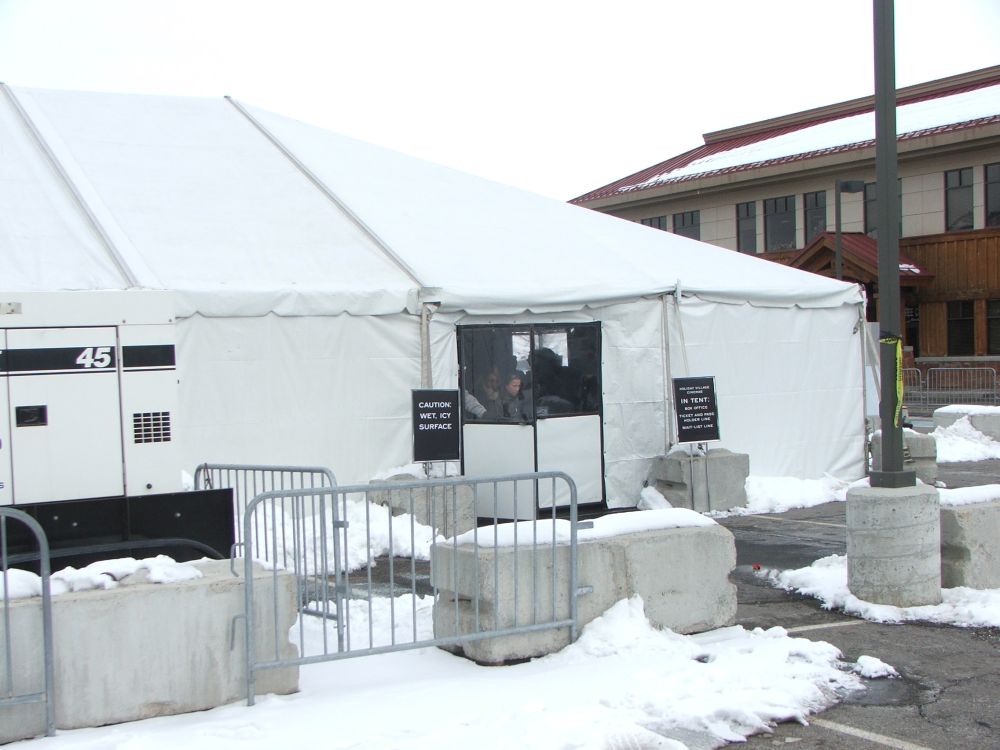 No sightings today. I did see tons of “famous” movie bloggers, but I see them every day up at the festival.

‘Being Elmo‘ – This is a very touching and moving documentary about Kevin Clash, the voice and hands behind Elmo. Man, I seriously loved this movie. Amid the depressing pictures at the festival, this one put a smile on my face. Just watching a man achieve his dream is simply amazing. It’s a wonderful little documentary.

‘Page One‘ – This is a documentary about what a year inside The New York Times is like. It chronicles the changing of our media, and tries its best to explain why the Times is still around while other major newspapers across the country are folding under bankruptcy. It’s a fascinating documentary if you’re interested in what our media is becoming and how technology is changing it.

‘Vampire‘ – What a pile of dreck this is. Ugh. It’s such a pretentious slog to get through. The movie raises the issue of suicide, but mostly in my own mind. It’s about a serial killer who preys on young women who are about to commit suicide. He drains their blood, because they don’t care anyway, and drinks it. I hated, hated, hated this movie.

‘The Troll Hunter‘ – Like ‘Cloverfield‘ but with trolls, ‘The Troll Hunter’ is kind of fun. It’s neither amazing nor boring. It lies somewhere in between, about just average. A good 10 – 15 minutes of blurry camera footage while people run from trolls could be cut out, though.

‘I Melt with You‘ – Starring Rob Lowe, Jeremy Piven, and Thomas Jane. Good cast, right? Seems like it. Seems like this would be a good movie. WRONG! This is the worst movie at the festival. It’s stunningly awful. It’s two full hours of moronic characters doing drugs and drinking alcohol, and feeling sorry for themselves. Blech.