Sundance 2012 is right around the corner. I’ll be attending the festival again in January, along with fellow High-Def Digest writer Luke Hickman. Last week, the festival started announcing the films that will be shown to audiences. Over the next couple of weeks, I’ll highlight some of the titles that have caught my attention.

We’ll start with the U.S. Dramatic Competition films first. To give you some perspective, movies in this category at the last festival included noteworthy entries like ‘Another Earth’, ‘Higher Ground’, the Grand Jury Prize Winner ‘Like Crazy’, ‘Martha Marcy May Marlene’, ‘Take Shelter’, and ‘Terri’. Many of these films gained steam at the festival and are now being talked about during the awards season. It’s very possible that quite a few films from this list of 16 will end up becoming award fodder for next year. You’ll also notice a long list of household names starring in these movies. While some will be very low budget independent films, others have familiar faces like Michael Cera, Danny Glover, Amanda Seyfried and Blythe Danner.

Below is a list of the movies in this section.

‘Beasts of the Southern Wild’

Synopsis: Water’s gonna rise up, wild animals gonna rerun from the grave, and everything south of the levee is goin’ under in this tale of a six-year-old named Hushpuppy, who lives with her daddy at the edge of the world.

Thoughts: I like the fact that this movie is set in Louisiana. The gritty description offered by Cinereach Productions gives us the feeling that this movie will be a mesh of the eclectic communities that live along the edge of the Louisiana Delta. It makes me think of ‘Treme’, which just so happens to be one of my favorite TV shows right now.

Synopsis: Indifferent even to the prospects of inheriting his father’s estate, Swanson whiles away his days with a group of aging Brooklyn hipsters, engaging in small acts of recreational cruelty and pacified boredom.

Thoughts: The mere mention of “hipsters” turns me off straightaway. I learned my lesson with ‘Bellflower’. I know I’m basically judging a book by its cover (well, a movie by its synopsis), but I think I’ll be skipping this one at the festival. There’s only so much time to see so many movies, and I really can’t stomach another movie about cruel, indifferent hipsters.

‘The End of Love’ 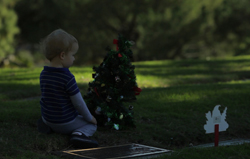 Synopsis: A young father unravels following the loss of the mother of his child.

Thoughts: There’s not much of an explanation to go on here, but the names may impress you. First of all, you may remember Webber as Stephen from ‘Scott Pilgrim vs. the World’. Taking the director’s chair, Webber joins his ‘Scott Pilgrim’ co-star Michael Cera in a dramatic movie that’s sure to draw big crowds simply due to all the notable names attached. 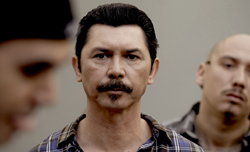 Synopsis: A hip hop-driven drama about a Mexican girl who rises to fame and consciousness as she copes with the incarceration of her mother through music.

Thoughts: Yes, you read that right. It’s Lou Diamond Phillips, everybody. I don’t know why I get such a kick out of seeing the guy’s name pop up randomly every now and then. I just do. This one sounds interesting, though. Gina Rodriguez takes on the role of Majo, a young street poet who faces hard choices when she begins to become a famous lyricist. You’ve also got the incomparable Edward James Olmos coming off his stint on ‘Dexter’, which so far has been great stuff. It kind of sounds like this year’s ‘Hustle & Flow’ to me. 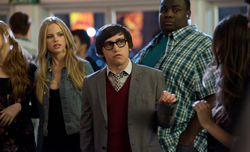 Synopsis: Two high schoolers meet at a party. Over the course of a weekend, things turn magical, romantic, complicated and funny, as they discover what it’s like to fall in love for the first time.

Thoughts: The cast is interesting. Craig Roberts is coming off another Sundance role in ‘Submarine’ where people took notice of him. But he’s sharing the spotlight with Victoria Justice, who stars in terrible Disney Channel-type sitcoms, and Dylan O’Brien, who plays Stiles on MTV’s new ‘Teen Wolf’ show. So, yeah, who knows where this movie will end up? From the synopsis, it seems like we’re in for the typical coming-of-age drama that we usually see a lot of at the festival anyway.

Synopsis: A struggling musician takes an overnight long-distance drive in order to fight his estranged wife for custody of their young daughter.

Thoughts: ‘For Ellen’ screams inner struggle, just from the vague synopsis above. But that’s what film festival movies do well. I’m not even sure who plays the struggling musician mentioned above (most likely Dano or Heder), but it sounds like a worthwhile premise. For myself, however, I don’t particularly enjoy Heder ever, so I may not end up getting to see this one.

‘Hello I Must Be Going’

Synopsis: Divorced, childless, demoralized and condemned to move back in with her parents at the age of 35, Amy Minsky’s prospects look bleak – until the unexpected attention of a teenage boy changes everything.

Thoughts: The synopsis for ‘Hello I Must Be Going’ is perfect Sundance fodder. Starring the wonderful Melanie Lynskey (‘Win Win’), this movie will be on the top of my personal must-see list, even though the premise (a broken down character returning to her roots to discover herself) seems quite standard for the festival circuit.

‘Keep the Lights On’

Synopsis: An autobiographically inspired story of a passionate long-term relationship between two men driven by addiction and secrets but bound by love and hopefulness.

Thoughts: It’s a period piece of sorts. Set in 1997, ‘Keep the Lights On’ tells the story of Erik (Lindhardt) and Paul (Booth) who become involved in a relationship with one another. This film is sure to be edgy and a hot topic with crowds at the festival. It’s obviously dealing with a divisive issue, and it’ll be interesting to see how different people handle its subject matter. 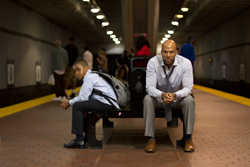 Synopsis: An orphaned 11-year-old boy is forced to face the unpleasant truth about his beloved uncle during one harrowing day in the streets of Baltimore.

Thoughts: I’m pretty sure that I’d see anything with Dennis Haysbert in it, especially after his stint in ’24’. I can’t even change the channel during his Allstate commercials. He’s so darn commanding. He makes me listen to him. ‘LUV’ seems to be another coming-of-age story, but this time set on the rough streets of Baltimore. I watched ‘The Wire’. I know what Baltimore’s like. That’s what it’s like, right?

Synopsis: When her husband is incarcerated, an African-American woman struggles to maintain her marriage and her identity.

Thoughts: Sundance usually does a great job at picking movies that accentuate the struggle of different types of people who come from different backgrounds, ethnicities and socio-economic statuses. ‘Middle of Nowhere’ intrigues me because its explanation seems so down to earth, much like the heralded Sundance flick ‘Precious’.

Synopsis: Martine, a young artist from New York, is invited into the home of a hip, liberal L.A. family for a week. Her presence unravels the family’s carefully maintained status quo, and a mess of sexual and emotional entanglements ensues.
Thoughts: I’m a fan of many of the people involved in this one, mainly Krasinski, Thirlby and Levy. Levy has done a great job on the new sitcom ‘Suburgatory’, and Krasinski is always a fan favorite. A tale of sexual exploration seems pretty par for the course as far as Sundance is concerned, though.

Synopsis: A trio of magazine employees investigate a classified ad seeking a partner for time travel. One employee develops feelings for the paranoid but compelling loner and seeks to discover what he’s really up to.

Thoughts: Okay, how can you not like the brief synopsis for this movie? With my limited knowledge about the film, I’m assuming that it’s set in the future when time travel is such a common thing that people put out classified ads for partners to travel with. If, however, it’s set in the present, then that makes it all the more weird. Mark Duplass is going to be a busy guy at the festival. He’s already attached to numerous films in one form or another. Also, ‘Parks & Rec’ fans might be interested to see what sourpuss Aubrey Plaza is like in a dramatic feature.

Synopsis: As her sister Beth prepares to get married, Sarah finds herself caught up in an intense post-breakup rebound. The two fumble through the redefined emotional landscape of modern day relationships, forced to relearn how to love and be loved.

Thoughts: This looks like the typical relationship saga that we see time and time again at film festivals. That’s not to say that it’s going to be bad. As we all know, it’s about how the director and writers are able to put together an interesting, original storyline from a concept we’ve seen over and over. Also, Sundance has shown from its taste in relationship films like ‘(500) Days of Summer’ and ‘Like Crazy’ that it knows how to pick them.

Synopsis: A recent college graduate goes to Paris after breaking up with his girlfriend of five years. Once there, he falls in love with a young prostitute and their fateful journey begins.

Thoughts: Falling in love with a hooker, hmm? It’s been done before, that’s for sure. Nothing about this movie jumps out to me.

Synopsis: Kate and Charlie are a young married couple whose bond is built on a mutual love of music, laughter and… drinking. When Kate decides to get sober, her new lifestyle brings troubling issues to the surface and calls into question her relationship with Charlie.

Thoughts: I’ll admit to having a crush on Mary Elizabeth Winstead after seeing her in ‘Scott Pilgrim vs. the World’. So, if nothing else, her name attached to this movie draws me in. Sometimes, when you know next to nothing about the movie, it’s the names that get you excited to see it. Such is the case with ‘Smashed’.

Synopsis: Mark O’Brien, a 36-year-old poet and journalist with an iron lung, decides that he no longer wishes to be a virgin. With the help of his therapist and the guidance of his priest, he contacts a professional sex surrogate to take him on a journey to manhood.

Thoughts: Altogether, this seems like the strongest cast of the bunch. John Hawkes, who’s been at the last two Sundance Film Festivals (‘Winters Bone’ in 2010 and ‘Martha Marcy May Marlene’ in 2011), gets a starring role this time around. He’s fantastic in the ancillary roles he usually takes on, but this one seems like it could be really great. Throw in William H. Macy and you’ve got two actors who can really command the screen.

Remember to follow me on Twitter @AaronPeck. I’ll be tweeting all sorts of 140-character movie reviews and pictures of random celebrities that I see around town.