Two more network sitcoms have premiered, both of them on ABC. Can Tim Allen resurrect his TV career? Are we ready for yet another sitcom where a bunch of grown men act like giant man-babies? Let’s see how ‘Last Man Standing’ and ‘Man Up’ fare on the Sitcom Scorecard. 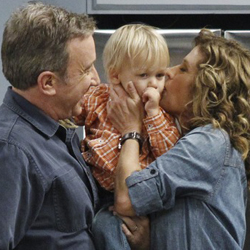 Pilot Episode Thoughts: Let’s see, Tim Allen stars in a show with three children, a neurotic wife and a job where he works with manly tools. Nope, ‘Home Improvement’ didn’t get resurrected, but ‘Last Man Standing’ is ABC’s attempt to bring Allen back to TV. It’s almost as if Allen wouldn’t agree to come back unless the network could find a familiar project for him.

‘Last Man Standing’ is just ‘Home Improvement’ with three daughters instead of three sons. Rather than own his own tool business, Allen works at a recreational store that caters to dudes who like to do manly things in the great outdoors. To make matters worse, it’s a traditional sitcom with multiple cameras, a stagnant set that we peer into from the same angles and a laugh track. I’m really surprised that there isn’t a faceless next door neighbor who peers over the fence and gives Tim sage wisdom for his life.

Am I wrong to think that child actor twins Evan and Luke Kruntchev, who play the grandson in the show, will be even more messed up from being on this show than in Showtime’s ‘Dexter’, where they play Harrison?

What a waste of precious time ‘Last Man Standing’ is. It’s ‘Home Improvement’ reheated with daughters instead of sons. That’s it. End of story.

Prediction: It’s hard to say, but I think ‘Last Man Standing’ gets canceled before the end of its season. The variable at work here is Tim Allen’s all-American presence that people seem to flock to. If viewers take a shine to the show like they did ‘Home Improvement’, then watch out. 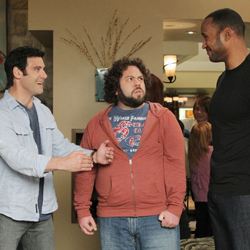 Pilot Episode Thoughts: ‘Man Up’ held a bit of promise from its commercials. It looked like maybe a tamer, network-friendly version of FX’s ‘The League’, where a group of guys casually make jokes at each other’s expense all the while trying to deal with mid-life crises. I had hopes for ‘Man Up’, but the pilot episode crashed and burned.

The gist of the story is that it’s about a group of male buddies. Will (Zickel), Craig (Moynihan) and Kenny (Fogler) are all dealing with life’s problems and have each other to fall back on. They stay up late playing videogames and chatting about life through their console headsets. (Quick Side Note: It’s become a pet peeve of mine to watch people mimic playing videogames in movies or TV shows. No one shakes the controller like they’re having a seizure. Why is this the accepted way of acting on TV when you have a videogame controller in your hand?) Will is a family man, hoping that his son grows up to be a real man. Craig just lost his girlfriend as is heartsick that she’s marrying someone else. Meanwhile, Kenny just got divorced and now has to see his ex-wife nearly every day because she is best friends with Will’s wife.

Dan Fogler is not funny. I know that he thinks he’s the next Chris Farley, that much was evidenced with his spastic fat funny guy role in ‘Take Me Home Tonight’. He only ever has one volume: screechy. He’s always yelling and screaming, and it gets real old real fast. Soon, Grant (Simmons) is introduced as the man dating Kenny’s ex-wife. This was perhaps the absolute worst part of the show. It’s like the creators said, “Okay, you know The Rock and the Old Spice Guy from those commercials? Well, take those two and combine them into the most annoying over-the-top wannabe suave character you can think of.” Wow! I kept waiting for him to drop the act like his character was just messing with everyone. Nope. By the end of the episode, he was still acting like he was selling body wash.

I don’t have much hope for ‘Man Up’. It doesn’t seem to have a strong thread or story to follow. The characters aren’t interesting enough to become invested in, and Fogler is close to unwatchable.

Prediction: There are far too many better single-camera sitcoms out there. ABC has a few of them in ‘Modern Family’, ‘Happy Endings’ and the new surprise ‘Suburgatory’. There’s no room for error, and the pilot episode was less than impressive. If the show doesn’t get its act together, it’ll be canceled soon. People are going to see right through the phony Old Spice Dude imitation. 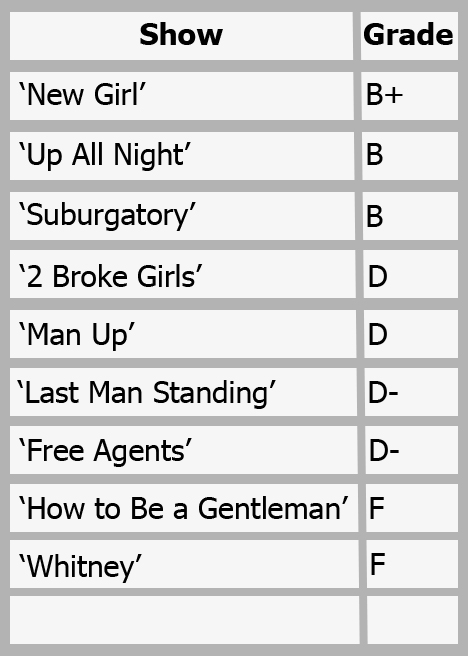