You know it’s officially fall when there are more new sitcoms on TV than familiar ones. Don’t ask me why, but as of right now, I’ve seen every new comedy pilot that has aired. Read on to see how I rate each of them.

The Sitcom Scorecard is a way to gauge exactly what comedy shows are new this fall, and whether they’re worth making the time to watch or not. It’s also a way for me to express my hatred for standard sitcoms that are still produced with laugh tracks without actually writing an entire recap about it.

As new sitcoms premiere, I’ll update the Scorecard. For now, let’s start with the comedies that premiered last week. 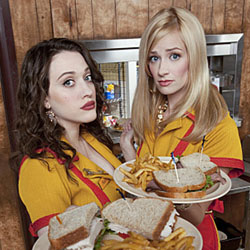 Pilot Episode Thoughts: CBS will never stop making standard sitcoms. Never, ever, ever. For some reason, people keep watching them. This is the network that has kept that torturous half hour of TV time ‘Two and a Half Men’ on the air for nine seasons. Nine SEASONS!

Continuing on the successful formula that CBS has instituted – starting your sitcom names with a number – ‘2 Broke Girls’ promises to be a dull, generic sitcom experience. In other words, it’ll do gangbusters on CBS. Max (Denning) is sourpuss waitress who doesn’t take any guff from anyone. She’s basically how I suspect Kat Denning is in real life. She’s got no money, her boyfriend is a scumbag, and now she’s got to share her tiny little restaurant with a new hire. Caroline (Behrs) is a once-rich socialite who has hit rock bottom after her wealthy father turned out to be a fictional version of Bernie Madoff. Now she’s got to take up residence in a sketchy part of town and earn a living by serving tables. Pitting two polar-opposite characters together is Sitcom Writing 101.

‘2 Broke Girls’ follows that all-too-familiar beat-beat-joke rhythm that so many sitcoms have used before. Every line of dialogue is written to set up a snide comment from another character. It’s far too easy to tell when a joke is coming. To make matters worse, one of the creators is Whitney Cummings, who is also involved with one of the other worst new comedies of the season. Dennings’ sour demeanor is enough to pick this show up out of F territory, but not enough to make it enjoyable. The end gimmick here is a total of money put up on the screen before the credits role. The two girls are saving up to open a bakery. Yeah, I know. Pretty dumb.

Prediction: The outcome of this series is very hard to predict seeing that this is CBS, the land where unfunny sitcoms flourish and grow. Still, I don’t see ‘2 Broke Girls’ being renewed for another season, but I wouldn’t be surprised to see it finish the entire first season run without a cancellation announcement. 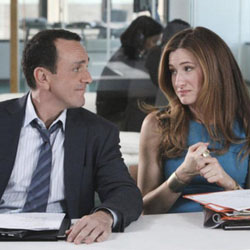 Pilot Episode Thoughts: Boy, was ‘Free Agents’ completely and utterly underwhelming. At least ‘2 Broke Girls’ got me to chuckle once or twice at its formulaic sitcom jokes. ‘Free Agents’, on the other hand, features a bored-looking Hank Azaria trying to navigate life as a bored, unfunny guy.

This single-camera sitcom (which is borrowed from a British show of the same name) is about Alex (Azaria), a recently divorced guy who has the hots for his co-worker Helen (Hahn). At the outset, the two of them are shown in bed together, and then we see them at work together later that day. This is supposed to surprise us, but it doesn’t, because both actors are so utterly mundane that it’s hard to care about anything going on with them.

The other thing that really bugged me was that the show is called ‘Free Agents’. One would assume that their job as talent agents would, you know, play a role in the pilot. No, not at all. At the end of the pilot, I wondered why this series is called ‘Free Agents’ in the first place. There isn’t a single point in the pilot where you can pick out that these people are talent agents. That seems like an important aspect that was completely left on the backburner.

Prediction: ‘Free Agents’ will be announced as canceled before its initial order of 13 episodes has completed. 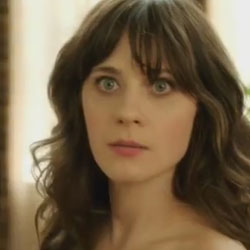 Pilot Episode Thoughts: I thought that ‘New Girl’ was good enough to warrant an official Bonus View recap of the premiere episode. It’s the first sitcom this year that has left me wanting more. That’s not to say the pilot episode was perfect. There were some lulls, and Deschanel seemed to be overacting quite a bit – almost like she was doing a parody of sitcom actors, but not quite pulling it off. There was something a little flat about her performance.

Still, it was funny, charming, and set itself up for a storyline that could have endless possibilities in the way of humor. When two worlds collide like three guys who all of a sudden have a girl move in, there’s always a possibility for laughs. Another plus is that ‘New Girl’ doesn’t have a laugh track.

Prediction: Sadly, ‘New Girl’ is on Fox, and who knows what’s going to happen with a sitcom there? Fox is one of the most unpredictable networks out there, routinely canceling fan favorite shows in order to make room for something else Seth McFarlane has regurgitated. However, I believe that ‘New Girl’ has staying power, even on Fox, and will be renewed for a second season. 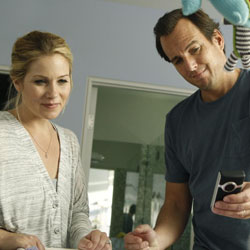 Pilot Episode Thoughts: Before the fall television season started, I was most excited for ‘Up All Night’ because of the recent addition to our household. Every preview for ‘Up All Night’ featured a scenario where Chris (Arnett) and Reagan (Applegate) were battling with the unforeseen problems directly after having their first child. I almost shot milk out my nose when I saw the preview of Chris and Reagan fighting their child, trying to put on her diaper. It seemed so real. So true. How in the world are babies’ legs stronger than adult arms? I have no idea, but they are.

The pilot episode wasn’t all that great, I’ll be honest. The timing seemed a little off and the jokes that I found funny on the commercials no longer had their comedic bite. But I found the show relatable, and stuck around for its second episode which was much, much better. ‘Up All Night’ is a single-camera sitcom that has real potential. With talent like Arnett and Applegate, I’m excited to see where the show goes. However, it seems like the storyline is a bit stunted. What do they do when the kid grows up? I guess you just move on to toddler terror, and then inevitably introduce a new baby, if the show actually gets that far.

Prediction: Although I like the show, I feel like the Maya Rudolph subplot (as a wannabe Oprah) hurts the overall funniness. I just don’t see it continuing on for another season, but it should run through the episodes that NBC ordered. 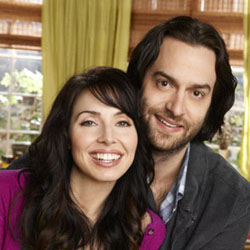 ‘Whitney’ is by far the worst sitcom to have premiered so far. What a waste of time this one is. Don’t even give it a second thought, because it just isn’t going to happen. It’ll never be funny. Never.

Prediction: Announcement of cancelation before the fifth episode.

As new sitcoms premiere, they’ll be added to the scorecard below. What do you think of the grades? Anything that I got completely wrong that you felt the opposite about? Let me know in the Comments. 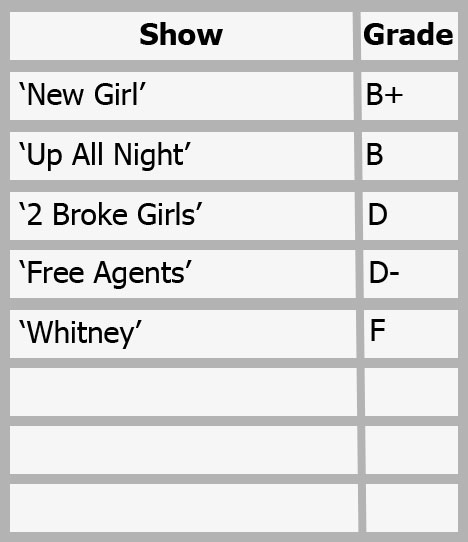