The fall TV season only just started, and already the worst new series of 2014 has declared itself. Well, I suppose that’s not fair. I have no intention of watching the atrocious-looking new ‘NCIS’ spin-off to see how bad it is. Failing that, at the very least, ‘Scorpion’ (also on CBS, purveyors of America’s dumbest yet consistently highest-rated television entertainment) is a total dog that everyone involved should be ashamed to put their names on. It’ll probably be a huge hit and run for years.

The series comes from the poisoned pens of hack screenwriters Alex Kurtzman and Roberto Orci. That’s warning #1. The opening credits announce that it’s “Based on a True Story.” To which I must respond: “Fuck you, you fucking liars.” This thing is so transparently fake that the only “true” part of the story is that there was once a person named Walter who liked computers. That’s about as much verisimilitude as this show can muster.

The premise is this: Robert Patrick is Homeland Security agent Cabe Gallo and… Hold on a second, I need to address that. Cabe Gallo? Seriously, “Cabe Gallo”? What the fuck kind of fakey made-up name is that? Argh, already I’m furious.

Agent Gallo has a problem. All the computers at LAX are down! The control tower can’t contact any of the planes in the air. No less than 56 fully-loaded passenger airliners are circling and will all simultaneously run out of fuel and crash into downtown L.A. within the hour. Oh noes!

Now, I’m not an air traffic controller, but couldn’t possibly some other airport with working computers contact these planes to redirect them? Or isn’t there some sort of federal emergency system for contacting them? I don’t know, maybe there isn’t, but this just seems like total bullshit to me that there are absolutely no backup failsafes for this contingency.

Fortunately, Agent Gallo once worked with genius computer nerd Walter O’Brien, who says that he has a photographic memory. Hmm, you’d think an actual genius would know that the correct term is “eidetic memory.”

Anyway, Gallo recruits Walter and his band of super-nerd misfit weirdos (described as “a mechanical prodigy, a world-class shrink, and a human calculator”) to fix the airport computers. Apparently, the Geek Squad was all booked up that day.

This will involve hacking! And mashing away at computer keyboards! And super technical computer jargon like… let me make sure I get this right… “Wi-Fi.” (The 80-year-olds in the target audience all collectively call their grandkids to translate for them.) The whole time, nerds with no social skills do nerdy things and weird out the normals, ha ha ha!! Stupid nerds…

For no apparent reason, it also involves pointless car chases, just to present the false semblance of something exciting happening.

Describing the climax of the pilot episode should sufficiently encapsulate how idiotic this show is. The only way to fix the airport computers is to reinstall some old software, but unfortunately the backup servers storing the old software overwrite it every 12 hours – which begs the question what’s the point of having backup servers that don’t actually back-up anything? One plane that’s in the air happens to have a copy of that old software, and the team manages to get hold of the pilot via a passenger who luckily has an old analog cell phone turned on. Sadly, the pilot can’t email the software because the plane’s Wi-Fi isn’t strong enough or some nonsense.

So, Walter cooks up a plan. With the help of a pretty waitress (Katharine McPhee), he races over to another nearby airport, commandeers a LamborghiniFerrari that just coincidentally happens to be parked on the tarmac there, and guns it down the runway at 200 mph while the jet descends to eight feet off the ground and the co-pilot hangs onto the landing gear to pass down a USB cable that the waitress can plug into Walter’s laptop and download the software before they run out of asphalt.

Yes, this is really what happens in the episode.

Question: They’re at an airport. They’re on a runway. WHY DOESN’T THE FUCKING PLANE JUST LAND?! Then let Walter walk up to it and plug his laptop in. Wouldn’t that be a much easier solution?

And we’re supposed to believe that this is based on a true story? I will repeat what I said earlier for emphasis: FUCK YOU, YOU FUCKING LIARS!!!

Officially, the title is spelled: 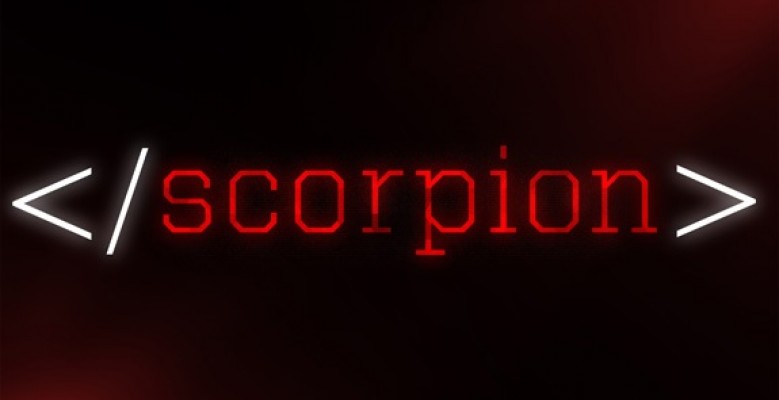 Not that the writers could be expected to know this, but putting a forward slash before the word within the angle brackets is the coding tag for ending a process or function. Yes, by all means, let’s please end ‘Scorpion’ as quickly as possible before future episodes can further infect humanity with their stupidity.