Even beyond ‘Blade Runner’, 1982 was a pretty momentous year for movies, especially (but not exclusively) for sci-fi movies. With the new sequel bringing Ridley Scott’s dystopian classic some fresh attention, this week’s Roundtable looks at other important films released that year.

As a refresher, Wikipedia has a list of movies released in 1982.

This is a really tough pick for me. I think ‘E.T.: The Extra-Terrestrial‘ is a great movie. In fact, when someone asks me to give them an example of a “perfect” film, I tell them ‘E.T’. – not because the movie is without flaws, but because I think the story structure, editing and presentation are the best I’ve seen. I watched the 35th Anniversary restoration on the big screen just a few weeks ago, and my opinion hasn’t changed about the film.

Still, I have to go with ‘Star Trek II: The Wrath of Khan‘ as my favorite movie of 1982. It’s the film that turned me into a lifelong ‘Star Trek’ fan. Long before ‘Game of Thrones’, ‘The Walking Dead’, or umpteen other franchises of today, it had the guts to kill off one of its main characters in an era when that idea was unthinkable. Keep in mind that when the movie came out, there was no master plan to bring Spock back. That was it and all the “Remember” stuff placed in the movie was a commentary on how humans should deal with loss, not something the filmmakers tried to sneak in for the next sequel.

The only bad thing I can say about Star ‘Trek II’ is that the movie has lost some of its original impact because, of course, the Spock character did come back and the film never quite played the same way after ‘Star Trek III’ was released. Still, I said it in last week’s Roundtable and I’ll say it again (once again borrowing the words from George Costanza): “It was a hell of a thing when Spock died.” That movie experience has stayed with me for over 35 years.

Although I was late in the game in terms of discovering it, my choice is John Carpenter’s ‘The Thing‘. What an amazing and thrilling horror film! It contains everything I love in horror: a monster with a creative skillset and a completely original design, a theme that’s always terrifying to see unfold (the uncertainty of the identity of those around you), and an isolated location that essentially plays a main character. An added bonus is Kurt Russell.

I didn’t see ‘The Thing’ until I was well into my 20s. Experiencing it then, it was pure perfection. A horror masterpiece. Without an age-old bias, when the Mary Elizabeth Winstead prequel/reboot arrived in 2011, I was able to watch that and enjoy it for the great movie it was too. If only I could talk others into seeing it the same way…

Rock opera/concept album media may be out of vogue in this century, but that only makes the 1982 classic ‘Pink Floyd: The Wall‘ that much more of a gem. As a complete film, it may have a floaty plot with Bob Geldof playing the fictional “Pink,” but the film has a visual and thematic density that makes each viewing in part or in whole likely to reveal some new detail or insight. The music is all-important, but the intercut animation could easily stand on its own.

There were so many good movies to choose from 1982, but the one that tops them all, in my opinion, is ‘Blade Runner’. Sadly, that’s been taken off the table, so my second favorite of that same year is John Carpenter’s ‘The Thing‘. To this day, the sci-fi horror classic remains one of the most viscerally violent and gory films ever made, and much of that is largely due to the phenomenal special effects, which have amazingly aged well against contemporary CG imagery. Being a huge fan of the book ‘Body Snatchers’ and the movies based on it, I greatly admire Carpenter exploring themes of social paranoia, losing one’s sense of individuality, and a world riddled with anxiety and distrust.

If there’s a horror anthology that can rival ‘Creepshow‘, I haven’t come across it, and that’s not for a lack of trying. Hey, why not take it a step further? Even with comic book adaptations being such a mainstay in cinemas these days, I’m not sure I’ve ever seen the medium translated to the screen as skillfully as what George Romero and Stephen King delivered 35 years ago. ‘Creepshow’ is an EC horror comic brought to life, with the vivid colors, comic book panel framing, and full-page scares you’d expect.

That fright comic aesthetic is a huge part of the reason I love ‘Creepshow’ so much, but much of the appeal also stems from how masterfully it takes advantage of the anthology format. In the space of two hours, you’re treated to a zombie moaning about a celebratory cake, a tale about a yokel stumbling onto a hell of a discovery that shifts gears from screwball comedy to tragedy awfully quickly, a cycle of vengeance that continues from beyond a waterlogged grave, a ravenous fuzzball in an oversized box, and cockroaches spilling out an insufferable, overentitled geezer’s mouth. Horror movies sometimes struggle to fill a feature-length runtime, but with ‘Creepshow’ being an anthology, these short, chilling tales can be all killer, no filler.

Funny, frightening, ghoulish, brilliant, and an endless treat for the eyes, ‘Creepshow’ is the reason I continue to suffer through every horror anthology I come across, despite knowing that nothing else will ever hold a candle. 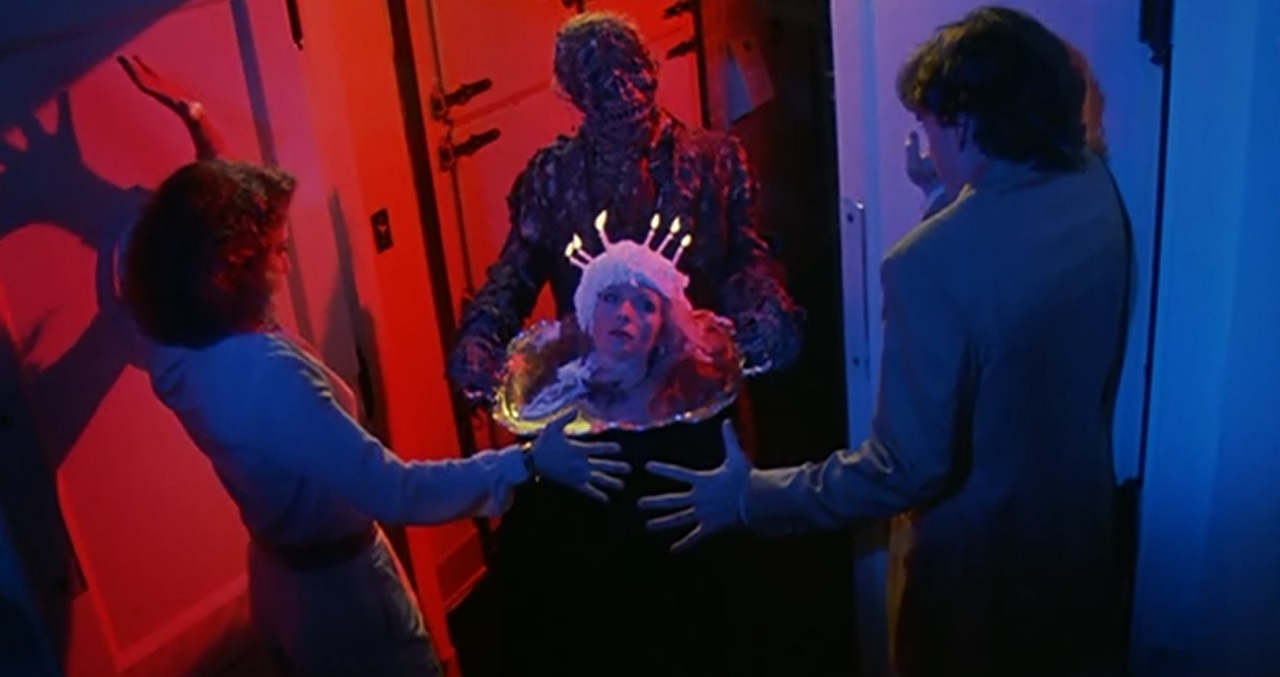 Errr… so to speak.

I’ll tell you this much, it sure wasn’t ‘Gandhi’, despite what the Oscar people may say.

1982 is of course famous for its sci-fi movies. In addition to those already mentioned above, I’ll give a little love to the original ‘Tron‘. The film is often disparaged as cheesy, but I think it holds up remarkably well as a fun fantasy adventure with some truly visionary design work.

Outside that genre, ‘First Blood‘ is a far smarter and better movie than any of its dopey ‘Rambo’ sequels.

Finally, my guilty pleasure of the year is ‘Grease 2’. Fans of the original ‘Grease’ (including my wife) despise this one, but as someone who doesn’t really give a shit about ‘Grease’, my calculation of its merits is pretty simple: Michelle Pfeiffer > Olivia Newton John.

What other noteworthy movies from 1982 have we missed? Tell us your favorites in the Comments.