Game of Thrones may be ending this weekend, but the story in Westeros is certainly not done. HBO already has a prequel series in development, though the details of it are still under wraps. What spinoffs would you like to pitch the network brass?

We all know that pizza is one of the most pervasive foods of the Western world, with countless restaurants, menu options, and ingredients sprouting up in an effort to assuage society’s nearly limitless hunger. But what if this once ubiquitous food became controlled by a select aristocracy, who, while hardly unified, were nevertheless snuffing out the rampant expansion of pizza in the last century via any means necessary? First, the many pizzerias in the land would be cracked down upon financially, physically, and even eliminated mysteriously from history. And just like that, this once beloved food would be a serious liability for any restaurant to offer, and even in our homes there might only be a selective sanctuary for our pizza needs.

With fringe pizza elements such as Tex-Mex pizza and toy pizza under fire as dubious propositions, the shifts in power that control the remaining pizza rights would reverberate through each episode. Behind the veil of the pizza power, there are whispers, and only a very select few know the truth. This thirst for power has its origins in another time and place, a place where a sacred fire was used to bake a special food…

In his final words, Maester Aemon referenced his kid brother, Aegon Targaryen, who, in his youth, had served as squire to Ser Duncan the Tall. Despite that nod, George R.R. Martin confirmed a while back that his Dunk and Egg prequel novellas are not ready to be adapted for television quite yet.

Its epic inaugural season will chart the rise of the Valyrian Freehold, the wars with the Ghiscari and the Rhoynish, and the Targaryen migration towards Dragonstone prior to the volcanic destruction of Valyria – all through the figurative eyes of three dragon eggs. I guess you hear people talking about all that more than anything else.

A peek at some conceptual art I’ve cooked up: 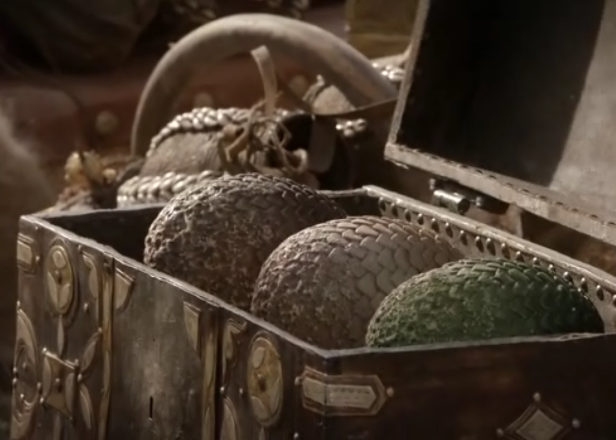 From there, we’ll bear witness to the founding the Seven Kingdoms. Late in Season 2, Aegon the Conqueror will mount his invasion of Westeros, followed by the Faith Militant uprising against the incestuous Targaryen monarchs in line for the throne after him. Season 3 will be defined by the Year of the Red Spring – with Viserys I plagued by one tragedy after another – leading directly into the civil war of the Dance of Dragons and the fall of these once-mighty beasts. Or, at least, we’ll see all this from the admittedly limited perspective of three dragon eggs.

Season 4 will center around the Blackfyre Rebellions and the War of the Ninepenny Kings. My plans from there are a bit more roughly sketched, but we’ll see more of Eddard Stark and his sister Lyanna, Robert Baratheon, and Jaime Lannister in their youths, directly leading into what we’ve seen on Game on Thrones. Robert’s Rebellion! Stannis Baratheon’s assault on Dragonstone! Greyjoy’s Rebellion! Well, saying “we’ll see” is a bit misleading, as Game of Egg, Egg, and Egg is, of course, told from the perspective of three dragon eggs. Plus sometimes that box is closed, so you can’t really see anything at all. Still, the series will be set during that time, and there’s something to be said for that.

HBO, you know where to send the checks. Let’s get into trouble, baby.

In this age of corporate consolidation throughout the entertainment industry, it seems inevitable that Disney will eventually buy up everything, including WarnerMedia and, by extension, HBO. This will provide a perfect opportunity for a crossover between the biggest television franchise with the biggest movie franchise. Get ready for the Game of Avengers!

Did you know that Westeros is one of the Nine Realms connected to Asgard by the Rainbow Bridge? (Or was connected, before Asgard and the bridge were destroyed in Thor: Ragnarok.) Did you know that the Night King was Thanos’ second cousin, twice removed? Those revelations and more are in store when the Guardians of the Galaxy, Black Panther, Captain Marvel, and anyone else still left standing after Endgame travel to the rubble of King’s Landing to face off against the power mad Dragon Emperor – who is of course literally a dragon.

Winter is coming… to the MCU!

Sadly, all sex, nudity, and graphic violence will need to be excised to ensure a PG-13 rating per Disney mandate.

How do you see Game of Thrones playing out in its spinoffs?