This has been a long time coming. After today’s matchups, we will have finished the first round of Movie Madness. Blood has been spilt, feelings have been hurt, and victors have emerged. Monday saw the defeat of a classic cinematic character when James Bond lost at the hands of tough guy John McClane. Hans Landa was then easily able to best Edmond Dantes to also move on into the next round. To finish up the first round, we look at the two matchups left in the Blu-ray Bracket: Dr. Evil versus Jack Torrence, and Paul Kersey against Jake LaMotta.

Dr. Evil is one of those picks who, in hindsight, may not have been a great entry into this tournament, but we’re stuck with him now. My brain sort of blanked out after around 60 characters or so, and a few like Dr. Evil slipped through. Still, it could work given the right set of circumstances. It’s just hard to picture a comedic villain going up against all these hardened action-centric characters. At least in his first round matchup, he isn’t going to be pitted against someone with brute strength. Instead, he’s going up against a man who shows you how crazy one can get during a slow decent into madness.

Dr. Evil – The hilarious take on Bond villains from the ‘Austin Powers’ franchise, Dr. Evil schemes and plans inside his secret volcano hideouts and such. He isn’t very adept at battles of a physical nature, but does have all the evil super villain necessities like frickin’ laser beams on frickin’ sharks.

Strengths: Has a cunning intellect and is able to build huge world-threatening weapons on a seemingly unlimited budget. And we already mentioned the laser beam enabled sharks.

Weaknesses: He’s slow and could easily be run down by a crazy person wielding an axe.

Jack Torrance – Speaking of crazy, Jack provides an entirely new meaning for the word. After going slowly insane, Torrance terrorized his own family with an axe and a mischievous grin.

Strengths: Dude is nuts. Batshit insanity pours out of every orifice on his body. Oh, and he has a big ol’ axe.

Weaknesses: He’s only one guy, and doesn’t have the evil empire of resources that Dr. Evil has at his disposal.

Robert De Niro as a hardened boxer goes up against Paul Kersey, the ‘Death Wish’ dude who made us think it was just fine and dandy for regular people to become vigilantes. Yes, this is another gun versus no gun debate. It comes to a head right here. Will LaMotta win out due to his cinematic legacy cemented by Martin Scorsese’s film? Or will the power of the bullet overcome everything?

Paul Kersey – He’s known in cinema history for taking the law into his own hands. Living through numerous films, Kersey has dispensed his own form of justice to the scum of society.

Strengths: He’s got tremendous longevity, not to mention he’s got killing down pat. Plus, he’s pretty handy with a gun.

Weaknesses: If it comes to hand-to-hand combat, LaMotta may gain the upper hand.

Jake LaMotta – We already had one boxer (Rocky) move through to the second round. Can LaMotta make it too?

Strengths: Like we noted above, he’s most likely got the better hand-to-hand combat skills going for him if it ever comes down to that.

Weaknesses: Besides his countless inner demons, LaMotta is going up against a man with a gun. He can only punch so far.

With the first round almost over, check out below to see how the second round looks. Which matchups are you excited to see? 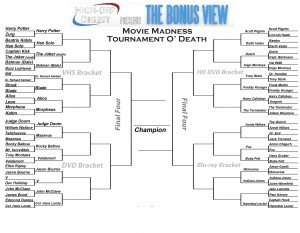