Darth Vader squeezed Indiana Jones’s larynx with his mind and pulverized it in Monday’s Movie Madness battle. With 160 votes tallied at the moment I’m writing this, 107 of them have gone to the Dark Lord of the Sith. Now it’s time to determine who’s the baddest of the bad. Who will be crowned champion of The Bonus View’s Movie Madness Tournament O’ Death 2011? Darth Vader goes up against Batman in the ultimate battle of good versus evil. Who’s going to take the crown? There’s only one way to find out.

Before we go any further, I’d like to post a picture of the tournament bracket to see how far we’ve come. Take a little while to look over the bracket and reminisce about the fun times we’ve spent together weeding out the weaklings. It’s been a lot of fun, and I’ve enjoyed every second of it. 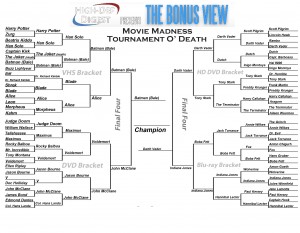 Okay, back to the task at hand. We’ve got a huge decision tonight. We want to know who’s going to be crowned the ultimate cinematic badass. Which character will take home the recognition of being the biggest and baddest person in the history of film? Let’s try to dissect this final matchup.

Batman – He’s had a tough road to these finals. He’s taken out fan favorites like Han Solo and the Joker, while dealing crushing blows to Alice and Buzz Lightyear. Now here he stands, cape unfurled, in the finale staring down at his toughest match yet. Batman has gotten this far without any superpowers of any kind. (I was actually surprised that the Final Four was comprised of three people who didn’t have any superpowers and only one who did.) Perhaps we value raw humanistic talent over supernatural powers. Perhaps this gives Batman an edge against a villain who can crush a throat with his mind. Or perhaps Batman is doomed this time around.

Darth Vader – If movies have taught us anything, it’s that good ultimately wins no matter what. That could be a very big help for Batman in this situation. However, Vader’s abilities seem to outweigh Batman’s strengths. Could this be one of the first times that evil ultimately triumphs over good? It’s certainly possible, given the fact that Vader is one of the baddest men to ever walk the universe. He’s a formidable foe. He’s a villain unlike any of Batman’s nemeses. He’s Darth Vader, need I say more?

Final Word: The good triumphing over evil lesson we’ve been spoon-fed by movies for decades seems to lean towards Batman in this final, epic battle of supremacy. On the other hand, we’re talking about a fight to the death. Do we really think that Batman, as amazing a fighter as he may be, could truly defeat Darth Vader in a face-to-face matchup? Truthfully, I think Batman is too overmatched here. Vader has almost every conceivable edge. What do you think? Show us with your vote.