Our Movie Madness Cinematic Sixteen started off with a doozy: Jason Bourne versus John McClane. Bourne had an early lead, but after we posted a link about the matchup on the HDD Facebook page, the voting swung into McClane’s favor and never turned back. Bourne made a good run, but the resourceful McClane will be moving on. Today’s battle is one of my favorites, because of how evenly-matched the contestants are: Blade versus Alice. Who’s going to win?

Blade has had a very easy road up until now. The luck of the draw matched him up against the loveable Shrek and the all-too-human Dr. Richard Kimble. However, now Blade faces a formidable opponent. He’s got superpowers, but so does she (depending on which version of Alice we’re discussing). This is going to be a fight for the ages.

Blade – He hacked his way through two easy opponents, but from here on out it’s going to be very tough to get a win. Alice is just as determined as he is, and just as good a fighter as he is. Blade might have breezed through the first two rounds, but his test starts now.

Secret Weapon: His vampire-like abilities seem to give him a slight edge, but not that much. He’s a weapons expert, but like we’ve noted before, many of his weapons are specifically built to kill vampires, not zombie-slaying hotties.

Alice – Perhaps the most miraculous road through the tournament has been Alice’s. She barely got through the first round against fan-favorite Léon. Léon’s lead stayed steady throughout the voting, but then Alice came back with a surge. We had our first and only tie in the tournament. Since Alice’s movies have grossed more box office dollars (as per the rules), she moved on. Alice next easily handled Morpheus, and now has to take on the vampire hunter, Blade.

Secret Weapon: I know different versions of Alice, depending on which movie you’re watching, have different powers. Let’s just say this Alice, fighting Blade today, is the toughest Alice out there. Meaning, not only is she a genius when it comes to firearms and hand-to-hand combat, but she’s also got some killer telekinesis powers. That might just give her an edge in this fight.

Here’s what the tournament looks like now. I think we can all agree that the Cinematic Sixteen is a fearsome bunch. 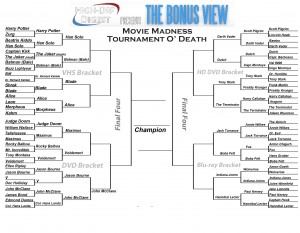