That damned eight-headed dragon won’t go away. This week, Orochi moved onto the Monster Madness Heavyweight semi-finals, while Samael cruised to victory in the Middleweight finals, where he’ll face the Predator next. Today, Orochi meets his toughest match yet, and we learn which killer animal has the killer-est instinct.

Before we get to the matches today, I wanted to update you on the brackets. Below, you can see the brackets as they’ve been completed after each round. 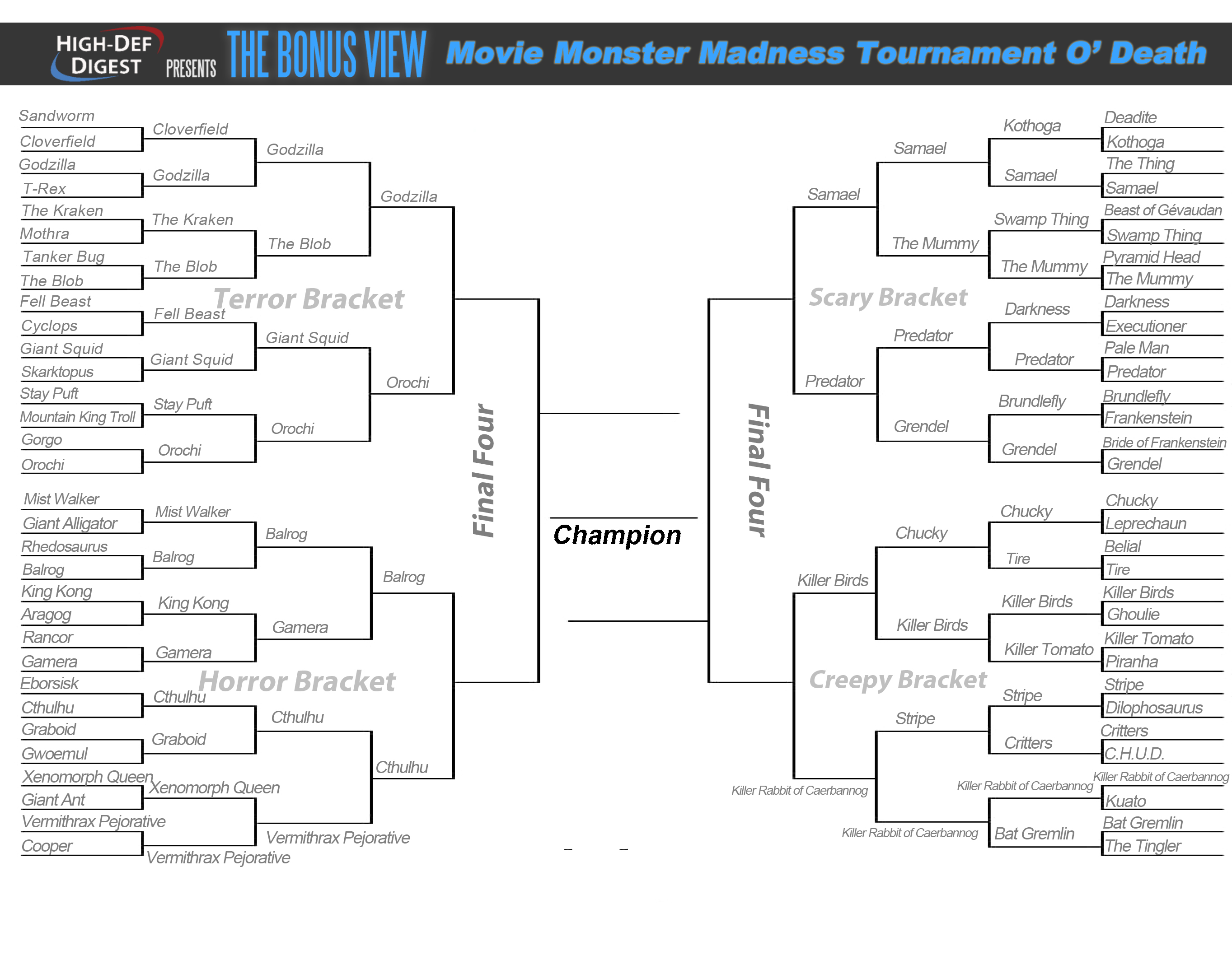 We’re jumping right in with Orochi. He doesn’t get any rest. It’s a back-to-back battle for him, because I want to see if he can stand his own against the monster, the myth, the legend: Godzilla.

Orochi – Looking back on it, I don’t think I should’ve included Orochi in the tourney. His movie history is sketchy at best. Truthfully, I don’t know exactly what sort of powers the movie version of Orochi has besides having eight beastly heads of death. They’ve been enough to turn the tide in his favor, but will that change against Godzilla?

Godzilla – The path for Godzilla hasn’t been easy at all. Taking out Cloverfield was tough. Taking out the Blob was nearly impossible, given how handily the pink ooze had beaten its previous opponents. However, it seems like he should make short work of the dragon.

Final Word: Godzilla wins here. Mostly because I’m sick of watching Orochi advance on the sole basis that he has eight menacing heads. Maybe I should’ve put the Hydra in his place. Oh well, that’s the past, and Godzilla is the future. RAAWWWWR!!

The next match-up is for all the marbles in the Featherweight Bracket. The true featherweights, the Killer Birds, find themselves facing the bloodthirsty Killer Rabbit of Caerbannog. Will the sheer numbers of birds overcome the jugular-shredding rabbit? Or will the four-legged death dealer simply jump from bird to bird, leaving bloodied beaks in his wake?

Killer Birds – I like that the birds have gotten this far. Maybe it seems a little unfair that they easily outnumber every opponent. Still, I didn’t think they’d make it past the first or second round. The Master of Suspense would be proud.

Killer Rabbit of Caerbannog – A relentless killing beast, he packs more killing power per square inch than any other monster in the tourney. Will the birds’ vast numbers be a problem for the rabbit? Will he tire at some point? Or does he keep on chomping until the job is done?

Final Word: This is a tough one. My vote goes to the Killer Birds, but it isn’t an easy vote. I think they could overwhelm the rabbit with their numbers and finally peck him to death. However, the rabbit would take down dozens, even hundreds, of birds before finally going down.