Here we go! It’s time for Monster Madness 2012. We’ve set our field of 64 bloodthirsty beasts that will battle to the death to determine the ultimate movie monster. Let’s get this bloodbath started!

First, I want to thank all our readers for your generous suggestions about monsters we should include. The movie world is filled with so many monsters that it’s simply impossible to contain them all in one tournament. I scoured through your suggestions and picked out many fan favorites. Then I coupled them with a few of my own preferences and came up with the list you’ll find below.

I apologize if your favorite monster wasn’t included, but remember that this is all just for fun. Contests will get heated, debates will get testy, and the winners will rarely please everyone all of the time. That’s OK. We’ve put together a pretty exciting tournament filled with all types of monsters. Every size and shape has been accounted for.

As I explained in my previous post, I’ve decided to start things off with a weight class separation. Personally, I have more fondness for giant city-crushing monsters, so I afforded them more room in the tournament. One half of the contest will be made up of 32 heavyweights that will vie for ultimate supremacy. The other half of the tourney is split into two categories. The 16 middleweights feature everything from smaller monsters to humanoid creatures. The other part of that side will contain 16 lightweight monsters. At the end of the tournament, the champions from each weight class will go on to fight each other.

Comments on our last post created some early controversy about whether characters like Freddy Kruger and Jason Voorhees should be called “monsters.” Ultimately, I chose not to include them, because we already have too many other fun creatures to pick from. (Also, Kruger appeared in one of our previous tournaments.) I realize that this might upset a few people, but hopefully your anger will diminish once you see the wide variety of monsters we were able to fit into this competition.

Please note that the match-ups were picked randomly. These tournaments could be seeded with favorites and underdogs, but I have neither the time nor energy to go through that process. Plus, even if I did, the complaints would be numerous. Random picking will have to suffice.

Let’s take a look at the brackets. (Click to enlarge.) 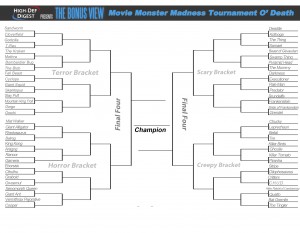 As you can see, the left side of the tournament is devoted to the abnormally huge monsters – those whose main objective is to squash people and destroy public property. These brackets are titled Terror and Horror.

Over in the Scary Bracket, we have all the Middleweights. They vary in sizes, but it’s pretty clear that none of these monsters could destroy half of Manhattan just by swinging an appendage.

Finally, the Creepy Bracket hosts a bunch of pint-sized monsters. Most of these make up for their size disadvantage by relentlessly terrorizing whomever happens across them.

Look over the brackets and get a feel for what we’re doing here. The first match-up will be posted later this week.