The Boston Independent Film Festival is going on right now. Even though I live in the city, I hadn’t been paying much attention. However, some friends suggested that Mrs. Z and I join them this weekend for a screening of ‘The Future’, the new film from performance artist Miranda July, of whom I’m honestly not terribly familiar. Based on this movie, it’s safe to say that I’m not a fan. Wow, this thing is just atrocious.

I went into the movie knowing next-to-nothing about Miranda July, other than the fact that she’s a self-described “performance artist,” which apparently involves some acting, some writing, some dancing, directing, and a little bit of anything else she feels like doing at any given moment. I have not seen her previous film, ‘Me and You and Everyone We Know’, though I have a vague recollection that it was well-received when it made the art-house rounds a few years ago. 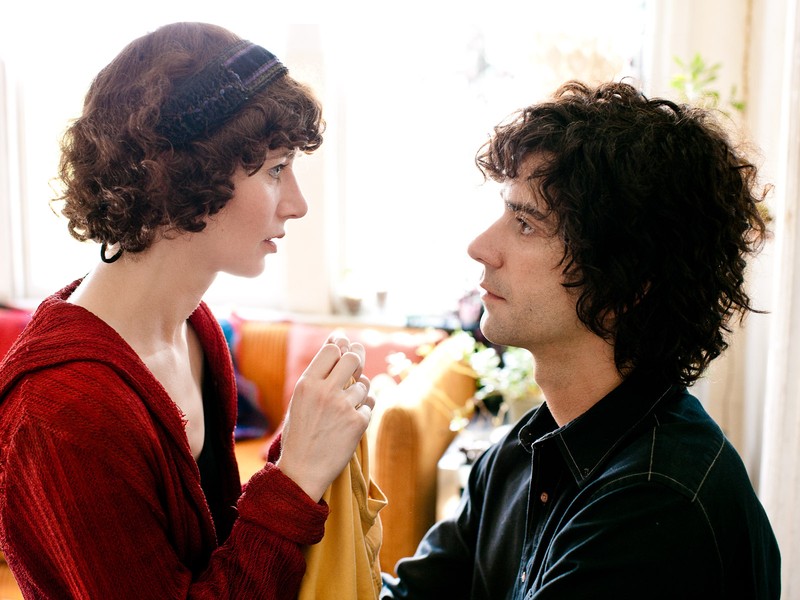 July has written, directed, and stars in ‘The Future’. The movie is the story of two intellectually-dysfunctional weirdos (July and ‘The New Adventures of Old Christine’ star Hamish Linklater) who are virtually indistinguishable from one another. I’m going to take it on faith that they have different genitals beneath their clothes, but otherwise they look and act like they’re two halves of the same person. The couple decides to adopt a cat from an animal shelter, believing that it’s sickly and that this will only be a five or six month commitment. When they find out that the cat will probably live several years, they both get it in their heads that this suddenly means the end of their lives. They’ll be cat-people now, and hence useless to society. “We’re almost 40, and 40 is basically 50,” reasons the woman, Sophie. There’s nothing left for them except to give up, settle into old age, and die. Because, you know, that’s what everyone thinks when they get a pet, right?

Well, the cat needs some medical treatment and can’t be released from the shelter for a month. So, they have one month to cram in all the important living they need to do before this dreaded feline deadline – important living such as doing absolutely nothing, sitting in their apartment, and staring at the walls. The man, Jason, decides that he’s going to be “more observant” of everything. This leads him to spend a lot of time with a kooky old man he meets via an ad in The Pennysaver for a used hairdryer. Sophie starts having an affair with a man she barely knows, mostly out of boredom. Of course, these new interests soon cause the dissolution of their relationship, all the while the cat waits patiently in the shelter for them to pick it up.

That’s sketch of the plot, anyway. The movie is filled with surreal elements. For an extended stretch, Jason imagines that he has the ability to freeze time but can’t turn it back on again. Sophie has hallucinations of an old T-shirt crawling on the ground and following her around, until she does a very strange dance that involves climbing into and through the shirt. (The scene is kind of impossible to describe fully.) Oh, and the movie is sporadically narrated by the cat, Paw-Paw, also voiced by July.

The film tries agonizingly hard to be quirky and pretentious and different, so much that it winds up being just like every other indie movie that tries too hard to be quirky and pretentious and different. The whole thing is about awkwardly weird people doing awkwardly weird things just for the sake of being awkward and weird. In fact, it’s really best described as a 90-minute student film. I feel like I saw this exact movie, in shorter form, a hundred times over when I went to film school. I wasn’t impressed with it then, and I’m not now.

The gist of July’s schtick is apparently that she’s trying to be just like comedienne Kristen Schaal, but without any trace of a sense of humor. If you can imagine Schaal’s character in ‘Flight of the Conchords’ played 100% straight and taken absolutely seriously, as if her dysfunctionality were some deep metaphor for the human condition, and that she were surrounded by a bunch of other characters just the same way, that’s about what you’d get in ‘The Future’. I love the Conchords and I think Schaal is hilarious, but this is too much. I found it completely insufferable. The cat has a line of dialogue near the end about life “going on and on and on and on…” and I’ll be damned if that doesn’t sum up this whole movie for me. These 90 minutes drag on forever. Even that line, which seems like it’s going to be the end of the movie, is then followed by more scenes of the characters being weird again.

The festival screening was followed by a Q&A with Miranda July afterwards, who opened by saying that she’d be insulted if people asked her questions right away without thinking about the movie for a little while first, and then stood there waiting for something to happen while no one asked her questions. From what I can tell, she didn’t do any acting in this movie at all. What you see on the screen is exactly what she is in real life. Eventually, a cadre of adoring fans who’d turned out to support her began asking sycophantic questions about her brilliant use of symbolism and how such-and-such a scene tied in with the fourth paragraph of a short story she’d written in some obscure collection – all of which she answered in the most obtuse manner possible, much to the fans’ delight.

I’ll be honest that there are selected ideas and images in the movie that I liked. That freezing time bit is pretty neat, and the T-shirt dance was actually very impressive. I might even say that I’d be open to seeing July in a different performance art context. But as a director making a movie…? No, the pieces of ‘The Future’ don’t come together at all. Frankly, it’s horrible. I just don’t have any patience for pretentious crap like this anymore.