Dick wrote an interesting post here in the blog recently about how nice it would be if movie theaters played more of the great classics – the kind of films that deserve to be seen on the big screen but rarely are anymore. I was lucky enough to have one such opportunity this weekend. Here in Boston, the Coolidge Corner Theatre screened a print of the newly-restored version of Fritz Lang’s masterpiece ‘Metropolis’. Even better, the first showing on Friday was projected with live musical accompaniment by the famed Alloy Orchestra. This was easily one of the best cinematic experiences I’ve had in years.

As most film fans know, Lang’s original cut of ‘Metropolis’ was butchered by its studio, and reduced from a running time of nearly 2 ½ hours down to various shortened versions in the vicinity of 90 minutes. Before his death in 1976, Lang said that ‘Metropolis’ as he envisioned it simply did not exist. Over the decades, there have been several projects to restore as much footage to the movie as possible. The last major attempt, which ran just over 2 hours, was released on DVD by Kino Video in 2002. Although a great improvement, the movie still had significant gaps missing that had to be summarized with intertitle text. 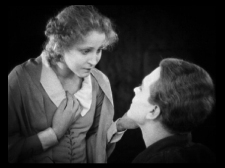 The remaining half hour was feared lost forever. That all changed in a big way two years ago, when a film archive in Argentina dug up an obscure 16mm reduction print of the movie that contained significantly more footage than any other known copy. After intensive restoration efforts, that footage has been re-integrated with the rest of the feature, using the original script, editing notes, and censorship records.

This is the closest thing to a complete version of ‘Metropolis’ that any of us may see in our lifetimes. Almost the entire movie is present. Only a few minutes remain missing. Once again, those bits are summarized with intertitle text. For the most part, the movie flows beautifully. The only glaring omission is an important scene where Joh Fredersen fights with Rotwang, and the real Maria escapes her captivity. Those are pretty big plot points to have to read as text.

Otherwise, the new footage adds or clarifies entire subplots involving the worker that Freder swaps identities with, and the mysterious “Thin Man” that Fredersen assigns to follow his son. Even more important are the smaller additions sprinkled throughout the movie – mostly individual shots or short sequences. While you can generally follow the film’s plot without these, their inclusion restores Lang’s original editing rhythms, which were quite remarkable and innovative at the time, and still pack a punch today.

Viewed on the big screen, and with live music (more on this shortly), it’s amazing just how vital and alive ‘Metropolis’ still is. These days, most silent movies feel like little more than a curiosity, something you’d study in film school as a historical lesson but never actually sit down to watch for entertainment. I’m sure that many viewers might feel daunted by the prospect of sitting for a 2 ½ hour silent movie. And yet, even with its simplistic (perhaps even naïve) story and broadly flamboyant, “theatrical” style of acting, ‘Metropolis’ really soars. That has little to do with its ambitious (now quaint) matte paintings, miniature cityscapes, or special effects. Lang was a formalist director through and through. He knew the power of a well-composed shot, and this movie is filled with them. His montages still dazzle. He uses close-ups so infrequently that, when the False Maria finally stares directly into the camera and reveals her evil grin, it’s startling. In its nearly-complete form, the movie is also incredibly well structured. For a film from 1927, this thing moves like lightning and rarely lets up. 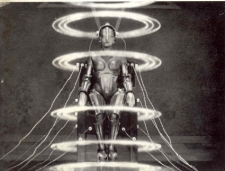 The new footage is very easy to pick out. While most of the film has been restored to as much clarity as modern technology can make possible, from the best film elements known to exist, that mysterious 16mm print was in terrible shape. The shots taken from it are very soft and coated in scratches. Because it was also somewhat cropped from the original 35mm photography, the preservationists have elected to display it pictureboxed with black bars on three sides of the Academy Ratio frame, so as to maintain a consistent scale with the 35mm footage around it. There’s a disclaimer about this at the start of the picture. It’s something you get used to quickly enough. That this footage exists at all, and is visible enough that you can tell what you’re looking at, is an extraordinary achievement.

The restoration print is being projected at the modern theatrical rate of 24 frames per second. This will be a controversial decision in some quarters. Some film purists raised an uproar when the frame rate of the last restoration was similarly adapted. However, I feel that a lot of the outrage may be misguided based on an incomplete understanding of how silent films were made.

It’s true that ‘Metropolis’ was originally photographed at the typical silent speed of 16 fps. Converting that to 24 fps speeds up the motion slightly. This is most visble when characters run (and young Freder sure likes to run). It’s often argued that the movie should be projected back at the same 16 fps rate it was photographed, which would have a more natural sense of motion. But there are some important counter-arguments to this.

First off, modern theaters aren’t equipped to project anything at 16 fps. Nor are modern video formats capable of displaying anything at that speed. The picture would need to be frame-rate adapted by scanning it digitally and then applying a complicated pulldown scheme to repeat frames in a pattern that fills the 24 fps rate (or the 60 Hz rate used on DVD). This can have its own adverse effects, such as image judder

When the film was released in 1927, there was very little standardization in theatrical projection. Many theaters at the time (perhaps even most?) would have projected it at 24 fps. Audiences of the day didn’t have the same bias toward “realistic” motion that we have today. They perceived movies as being distinctly different than reality. Slightly sped up action wouldn’t have bothered them.

While Fritz Lang himself never stated on the record any preference for the movie’s playback speed, it should be noted that the original musical score he commissioned from Gottfried Huppertz was composed to sync with 24 fps playback. This lends credence to the argument that 24 fps is a valid speed for the movie, and we modern audiences should just learn to accept some sped up motion. In fact, I’m sure that most audiences will accept it easily. The film simply has a “silent movie look” to it.

On the subject of music… Gottfried Huppertz composed a score that was intended to be played by live orchestras in major theaters. An adaptation of that score was included on the 2002 DVD. Theatrical prints of the current restoration include a newer adaptation of the same score that’s been extended to cover the new footage. Here in Boston, ‘Metropolis’ is playing for a week at the Coolidge theater. All but this past Friday’s showing will play with that soundtrack. The DVD and Blu-ray that Kino has announced for later this year will undoubtedly contain the same. 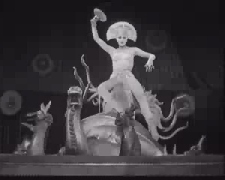 However, it’s a common tradition for silent films to receive alternate scores by various artists as they’re re-released throughout the decades. Famously (and also infamously) ‘Metropolis’ was released in the 1980s with a pop-rock soundtrack by music producer Giorgio Moroder. That version has been virtually suppressed in the years since. It was released on VHS and Laserdisc, both of which are now long out-of-print collectors’ items.

As I mentioned earlier, Friday’s first screening here in Boston played to live music by the Alloy Orchestra. The performance was nothing short of phenomenal. Their score is raw, urgent, and exciting. It has strongly-developed themes and motifs for the characters and storylines. It often exhibits tremendous power, but also has surprising subtlety during some scenes where you might expect bombast. The group played for 2 ½ hours straight without missing an on-screen cue, and received a standing ovation from the packed theater house at the end.

I listened to some of the Huppertz score on the old DVD afterwards, and found it to be fairly interesting and appropriate in its own right. It’s a little more traditional and romantic in comparison, though.

Although I’m as eager as anyone to own the Blu-ray release later this year, I have to urge anyone to see ‘Metropolis’ on the big screen if you have the opportunity. And if the Alloy Orchestra happens to be performing with it, don’t miss out. (Here’s the tour schedule.) Watching this movie with live music was a thrilling experience that I can’t recommend highly enough.