I’ve decided that in order to differentiate the various brackets in the March Movie Madness tournament, we’re going to have to give them names. The NCAA gives each bracket a directional name (East, West, South, and North). Since that just wouldn’t make sense here, I’ve come up with something more appropriate.

The bracket featuring the likes of Han Solo, The Joker (Heath Ledger), Buzz Lightyear and others will be the VHS Bracket. Below that, we have a bracket featuring the likes of Mr. Incredible, Voldemort, and Judge Doom. That one will be known as the DVD Bracket. Across from there, starting back up top we have characters like Scott Pilgrim, Dr. Horrible, and The Terminator. That will be the HD DVD Bracket. Finally, the last bracket below that one with Boba Fett, Indiana Jones, and Captain Hook will be the Blu-ray Bracket. The names have nothing to do with the actual bracket other than to differentiate them when we talk about them.

Since Christian Bale’s portrayal of Batman ran away with the vote in the preliminary round, we can now dive head first into the March Movie Madness tournament. We’ll start off with what I think is one of the toughest competitions in the tournament: the VHS Bracket.

This bracket actually has the potential for a Zurg versus Buzz Lightyear showdown if everything plays out. Also, it’s possible that when the VHS and DVD Brackets converge in the Final Four, we could have an epic Harry Potter versus Voldemort battle to the death. Keep these kinds of things in mind. You may want to help certain characters move forward just because you want to see them matched up with someone else.

For the first round of the tournament, we’ll do two matchups for every blog post in order to conserve time. We’d be doing this tournament until the end of the year if we didn’t consolidate the first couple of rounds. I’ll pick two matchups from the tournament. Using your vast movie knowledge plus any extreme fanboyism you may have residing in your geeky hearts, you’ll vote on who you would think would win a battle to the death.

This first matchup is a doozy. We’re pitting the wizard boy wonder against the evil galactic master of the universe. Potter has shown that he’s been able to withstand the evil powers of the greatest dark wizard to ever roam the lands, but is he any match for Zurg’s blaster hurling tiny tennis balls? To be fair, you have to pick which Zurg Potter will be battling. Toy Zurg may be no match for the wand-waving spell caster, but what about the Zurg who Buzz imagines that he’s fighting? Now that’s a completely different story.

Harry Potter – Beloved by people the world over, Harry Potter has become a phenomenon of epic proportions. It’s possible that the worldwide love for Harry Potter utterly eclipses the hold that Zurg has over the entire universe. Potter fans are a powerful force. However, we’re not talking about Potter fans here. We’re asking the question: could Harry Potter – the boy who seems to, by sheer luck, come out of every evil attack virtually unharmed – do battle with an intergalactic force like Zurg?

Strengths: Knows magic. Well, he knows a few things, but it’s never really his magic that gets him through each and every story. Rather, it’s just a series of opportune plot devices that enable him to survive. In other words, he’s the master of the Deus ex Machina. Oh, and he’s a killer broom flyer.

Weaknesses: It may take pages to list all of Harry’s weaknesses – from the Dursleys, to girl trouble, to his ongoing problems with that slick-haired Malfoy who looks like a wizard car salesman in training. Let’s be honest, the kid whines a lot. He’s not terribly skilled at magic. I mean, Hermione could beat the pants off of him any day of the week. Still, when it comes to facing pure evil, he has a certain lucky knack that gets him out of the toughest of jams.

Strengths: Ion blaster of doom. If we’re talking about toy Zurg, he shoots little balls out of it. If we’re talking about the Zurg we see at the beginning of ‘Toy Story 2’, then those ions he’s blasting are perfectly able to vaporize the top half of Lightyear’s body. Sure, it was a video game, but it’s your decision to choose which Zurg version you’re going to use.

Weaknesses: Is easily persuaded to turn good if given the proper coaxing. Open up Zurg’s family history to him, and his evil seemingly melts away right in front of you.

Let’s head on over to the Blu-ray Bracket to check out a matchup there. Here’s an interesting one. We’ve got the Grinch versus Annie Wilkes from ‘Misery’. Both of them are evil. One is slightly more insane than the other. As you’ll see further on in this tournament, craziness cannot be underestimated.

The Grinch – Hates the Whos, but that’s about it. Still, he hates them with a passion. So much so that he stole their Christmas from them and lied to a tiny girl as he stole her Christmas tree. That takes some dark, evil balls of steel to do something so devious.

Strengths: Can slither like a snake, which could come in handy if he was ever tied to Annie Wilkes’ bed. Is a devious and inventive planner. If he’s ever at any point persuaded to come to the good side, he gains super-Grinchian strength.

Weaknesses: Isn’t particularly good with a knife. I’m pretty sure he carves the Roast Beast crooked. Has a tiny heart, which could fail him in intense situations if his adrenaline starts pumping. Has skinny legs, which would be perfect for hobbling.

Annie Wilkes – In all seriousness, the girl is batshit crazy. Tying up dudes in her house and then hobbling them with a smile on her face – it doesn’t get much crazier than that.

Strengths: Being batshit insane is pretty much her only strength. There’s never a moment where she’s thinking rationally. However, the scariest thing about this nut is that she knows how to logically plot out the best way to torture someone. The Grinch is evil, but does his evilness stand a chance against Wilkes and her sledgehammer?

Weaknesses: Loves romance novels. So, if there was ever a way that The Grinch became an established author, then maybe he’d be able to write his way out of the situation. 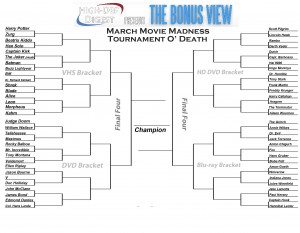