Amidst all the hubbub about the Academy Awards, you might be forgiven for forgetting that the Independent Spirit Awards also took place over the weekend. Certainly, Hollywood seems to have forgotten about them. Once a hipper, edgier alternative to the Oscars, one designed to reward the smaller films that Oscar ignored, the Spirit Awards ceremony has lately degenerated into an inconsequential also-ran event that celebrates a lot of the same movies that Oscar does. That was definitely the case this year.

At Saturday’s ceremony, host Seth Rogen tried to keep the tone irreverent by cracking jokes about how meaningless the Spirit Awards really are. No studio will ever advertise a movie as being a Spirit Award winner, he explained, and no one will make more money in the future for having been nominated or won. Rogen mostly bombed on stage, though that had less to do with his material (which was actually pretty funny and on-target) than the fact that the audience simply wasn’t paying attention to anything going on. The crowd ignored and loudly chattered through almost all of the presenters. 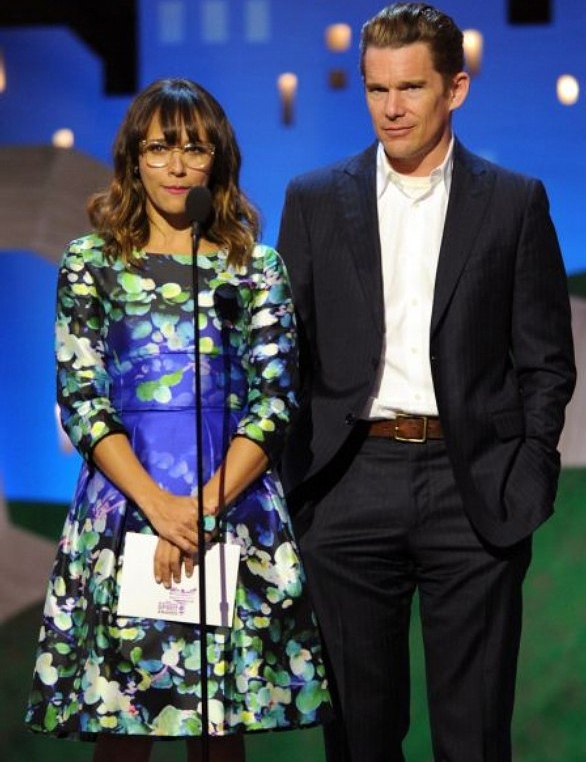 To be fair, the ceremony didn’t offer much to care about. Very few celebrities of note showed up, and those that did were almost universally dressed and styled hideously. (Seriously, it has to take a lot of effort to make Rashida Jones look as bad as she did. What was that about? When you stand next to Ethan Hawke and he’s the one who doesn’t look a mess, something has gone very wrong in your life.) A lot of the winners couldn’t make the show, because they were busy jetting around among more important award ceremonies. Because Jean Dujardin wasn’t there, for example, his brother was supposed to accept the award on his behalf, but apparently couldn’t be bothered to go up on stage. Poor Penelope Ann Miller had to do it instead, completely flustered and unprepared.

Although the Spirits did in fact nominate a fair number of movies that were passed over for Oscars, including several I’d never even heard of (did titles like ‘Natural Selection’, ‘Think of Me’ or ‘Gun Hill Road’ actually play in theaters?), most of the winners came down to movies already recognized by the Oscars. Hardly any of them were really even independent films, if we’re being honest. Just because a studio calls itself Warner Independent Pictures doesn’t somehow make it not a branch of Warner Bros., or Fox Searchlight a branch of 20th Century Fox. These specialty divisions basically amount to a way for the major studios to cop-opt the independent film scene for themselves and once again pat each other on the backs, as if they didn’t already have enough opportunities to do that.

Anyway, here’s a look at this year’s major categories:

You can find the full list of nominees and winners on the official Spirit Awards web site.