‘Game Changer’ (air date 3/31/10) is an episode that really showcases just how entertaining, and how familiar, ‘Modern Family’ can be. It may not have been the funniest episode of the first season, but it’s one that’s easy to identify with, especially for gear nuts. The main thread of this story follows Phil, a self described early adopter.

Whether he is or not is another matter, but he really earnestly wants to be the guy who’s got all the cool tech. He’s got a nice TV and home theater system with a slick touchscreen remote to boot. 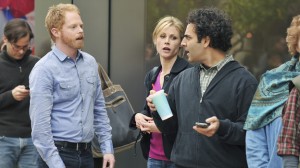 For his birthday, April 3rd, he wants an iPad, which comes out on the same day. The way Phil puts it, “It’s like Steve Jobs and God got together to say, ‘We love you, Phil.'” Needless to say, he doesn’t get one. His wife Claire, meanwhile, goes on the hunt to find an iPad for her birthday boy.

Phil is obviously a bit of a parody in this particular episode. His highs and lows throughout completely depend on whether he’s getting his iPad or not. His reactions to news about his new toy are childlike, but you can’t help but feel for him. When it comes to the iPad, he’s like a 12 year old in a grown up’s body. In the end, of course, he gets it, and he’s more than a little excited. 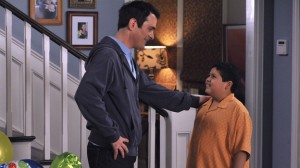 The side story involving Jay, Gloria, and Manny playing chess is a bit weak. While it’s nice to have three stories to follow in every episode, this one felt a bit tacked on. It really could have been developed into a bigger and more interesting story, but it wasn’t, and so the payoff at the end just fell flat.

Cameron and Mitchell’s (those names have to be a tip of the hat to ‘Hedwig and the Angry Inch’, don’t they?) segments seemed a bit slapped together too. The premise of Cam listening in on the neighbors through a baby monitor was a great start, but dividing the story up – Mitchell decided to learn how to fight – meant that not enough time could be spent with either. Five stories in 22 minutes is just one too many.

If you’re not watching ‘Modern Family’, you’re missing out on one of the funniest new shows on television. I know, I usually avoid ABC too, but it’s just plain good.

While ‘Benched’ (air date 4/14/10) isn’t the funniest episode of the season, it’s definitely got a lot of heart. It also showcases the show’s mothers, which is a nice change of pace. There are three real stories in the episode, but the two strongest are the ones features Claire, Gloria and Cameron who, while not a mother, takes on the role.

The catalyst that sets off the events of ‘Benched’ is a basketball game. The coach of the Lil’ Dribblers, the unfortunately named team that Manny and Luke play on, is pretty harsh on the boys, hurling insults at them while they’re playing. Jay and Phil intervene and take over the coaching position. 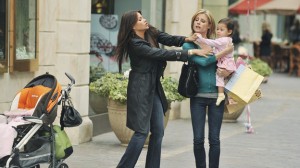 The well intentioned Gloria is asked to leave the game by Manny since, as he puts it, “Your words of encouragement encourage the other kids to make fun of me.” It’s one of three instances where the show’s kids want a bit of freedom from their parents.

Gloria and Claire, whose desire to take Alex shopping was only met with embarrassment, went off to buy clothes for Lily, who they’re watching for Cam and Mitchell who are off to hear about a job offer. Lily doesn’t cry or fuss when she’s handed over, and Cameron feels that his connection with the baby is slipping due to his new job.

The episode ranges for sweet to silly and overall it’s a good one. Justin Kirk (Andy Botwin of the hit Showtime series Weeds) guest stars at Mitchell’s new boss and he’s spot on all the way through. He’s got a dead –pan delivery that works incredibly well, especially when coupled with the over-the-top Cam and the skittish Mitchell.

Cameron and Mitchell really shine in this episode, and not only are they hilarious, but their characters get a little deeper too. We learn a little bit more about them and that’s what really helps to drive the comedy. 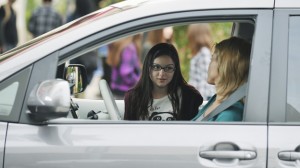 The end of the Claire and Gloria storyline was a bit of a disconnect for me. Claire tends to be a bit on the tougher side, but she’s always been well intentioned. At the end of ‘Benched’ she’s downright mean to her daughter. Alex may have deserved it, but it just seemed really spiteful and out of character.

Phil and Jay were funny as always, and the rivalry between the two gets explored a bit more. Phil finally shows up his father in law. Well, sort of. At the very least, he gets a bit of Phil’s respect, which is all he’s been looking for.

All in all, ‘Benched’ is a really solid episode. It’s not a gut buster like some of the earlier shows, but it does a great job in avoiding too much wackiness. This episode plays the straight man. It’s the Claire, the Mitchell or the Jay of episodes. It helps to keep the show grounded, and that’s essential.