It’s an event so unexpected, I had almost completely forgotten about it. With all the problems getting the cast back together, I thought it would never see the light of day. That’s right, ‘Futurama’ is finally returning to television, and it’s only three weeks away.

If you haven’t seen ‘Futurama’ or just haven’t given it a fair shake, you should know that when it was on, it was one of the smartest shows on TV. It referenced sci-fi, math and science far better than shows like ‘The Big Bang Theory,’ and with a great deal more subtlety. It was funny, sure, but it had characters we could get behind. And it had ‘Jurassic Bark,’ one of the most wonderfully bittersweet episodes I’ve ever seen. 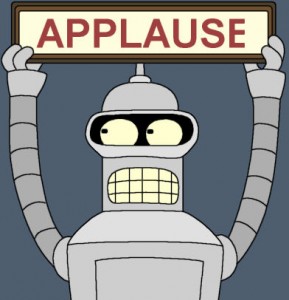 If you’re a fan of the show, you’re no doubt just as excited as I am. So tell us, how will you be celebrating?

Me? I’m having a party. I’ve invited twenty or thirty of my closest friends – out of which ten to fifteen will probably show up – and I’ll be getting things going in true ‘Futurama’ style.

To start, there will be pizza. Hungry Howie’s, I’m sure, since we don’t have a Pinucci’s near us. I’ll ask the delivery boy to show up and ask for I.C. Weiner, implying that there’s a nice tip in it for him if he does. Will I make the pizza boy trip and fall into my cryogenic vat? Probably not. The electricity bill has been high this spring already, and keeping a body at sub zero temperatures when it’s 80 degrees outside isn’t cheap.

There’ll be beer, because it’s impossible to honor Bender without the fuel that keeps him going. It’s a non-smoking apartment, so we won’t have cigars, no matter how cool they make us look. My original plans of renting a robot and twelve orphans to live inside him fell through. Turns out robots are expensive, and renting out orphans is 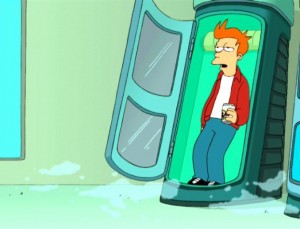 And hey, we’ll have some of the standard stuff too. Cookies shaped like spaceships, Mountain Dew cans with Slurm labels taped on, a suicide booth, and a can of anchovies.

Photos from the party and an HD recap will hit on the 25th, the day after the season premiere airs on Comedy Central.

Got any suggestions? What about your get-together, will you be wearing velour and singing karaoke, or do you prefer something a little laid back and, dare I say, neutral? Either way, do it up in the comments.