Most things that end shouldn’t be brought back. It’s a pretty steadfast rule that we can all agree on. Don’t bring a legendary basketball player out of retirement; don’t date an ex-girlfriend; and never bury your cat, son, or wife in a cemetery that brings people back to life with a weird demonic twist. When something that’s been gone for so long makes a return, it tends to lose the spark that made it great.

‘Futurama’ is an exception.

The last season of ‘Futurama’ aired back in 2003, before it was canceled by Fox. There have been four direct-to-video movies in the meantime, two of which are available on Blu-ray. Reruns have also been popular on Adult Swim and Cartoon Network. So now, Comedy Central has picked up the show for a sixth season, which started with a two-part premiere last night.

The first episode of kicks off with the expected jokes about cancelation. Then it goes straight into the sort of confusing, wonderful science fiction plot you’d expect from the show. The entire Planet Express crew is killed in a spaceship crash, along with a few others that happened to be in the ship at the time, Luckily, Professor Farnsworth has just the thing – a birth machine full of stem cells that can put them back together.

From there, we get some drama between Fry, Leela, Robot Fry and Robot Leela. There’s also a sort of sweet funeral ceremony. ‘Rebirth’ isn’t a comedy heavy episode, since there’s a lot of plot to throw in. As always, Bender provides the relief.

Through the entire episode, Bender has to dance so that the doomsday machine keeping him alive won’t explode. There aren’t a lot of shows that could get away with a gag like that. I can imagine the writer’s room: “All right, this episode is good, but it’s just not funny enough. We need an excuse to make Bender dance throughout the whole thing.” 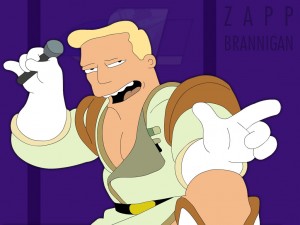 The strange thing is that it works. Every shot with Bender in it is a shot of Bender dancing. When the camera pulls out wide at Leela’s funeral, we see everyone grieving and Bender dancing. It’s sort of like a note from the show’s creators saying, “Just bear with us. We know it’s a funny show, but there’s some story we want to tell.”

The first episode is good, but it doesn’t compare to ‘In-A-Gadda-Da-Leela.’ It’s great to see that the show can pick up where it left off. This episode really shows that some things are worth brining back.

Zapp and Leela go off to fight a giant death sphere known as the “V-GINY.” (Yes, it’s a cheap gag, but it works.) They end up stranded on what Leela believes to be a distant planet. She believes that because that’s what Zapp tells her, and shows her through a hologram. In a series of revelations, each preceded by a great cringe from Zapp, we quickly find out that they’re actually stranded in a park on Earth.

This episode pairs up some great characters, and I’m always won over by Zapp Brannigan. His interactions with both Leela and Nixon make the episode. Zapp’s dreams of himself as a ’50s-style B-movie serial star are a lot of fun too.

‘In-A-Gadda-Da-Leela’ is full of comedy, sci-fi references and a bit of raunch. It’s everything that makes ‘Futurama’ great. If the next 24 episodes are as good at this, we’re in for one hell of a summer