No, that strange smell lingering in the air isn’t coming from Aquaman. The dead have returned with a vengeance in Cryptozoic Entertainment’s upcoming expansion set for the ‘DC Comics Deck-Building Game’. Brace yourselves for the Black Lantern Corps!

While the ‘DC Comics Deck-Building Game: Crisis Expansion Pack 2’ is technically the counterpart to the previously reviewed ‘Heroes Unite‘ set, it’s actually compatible with any of the standalone games in the line that are currently available on the market. And just like the first ‘Crisis’ expansion released last summer, ‘Crisis 2’ doesn’t really change the core structure of the game a whole lot, but it does introduce a few twists here and there that can lead to new and exciting ways to play.

In the original game, players had to work against each other trying to gain the most Victory Points – which kind of went against the grain of being a superhero “team.” There also weren’t any real rules for playing the game solo, either. With the introduction of the ‘Crisis’ expansions, this all changes. Players can now not only play alone if they so choose to, they also have the option work with each other against the game through something called “Crisis Mode.” 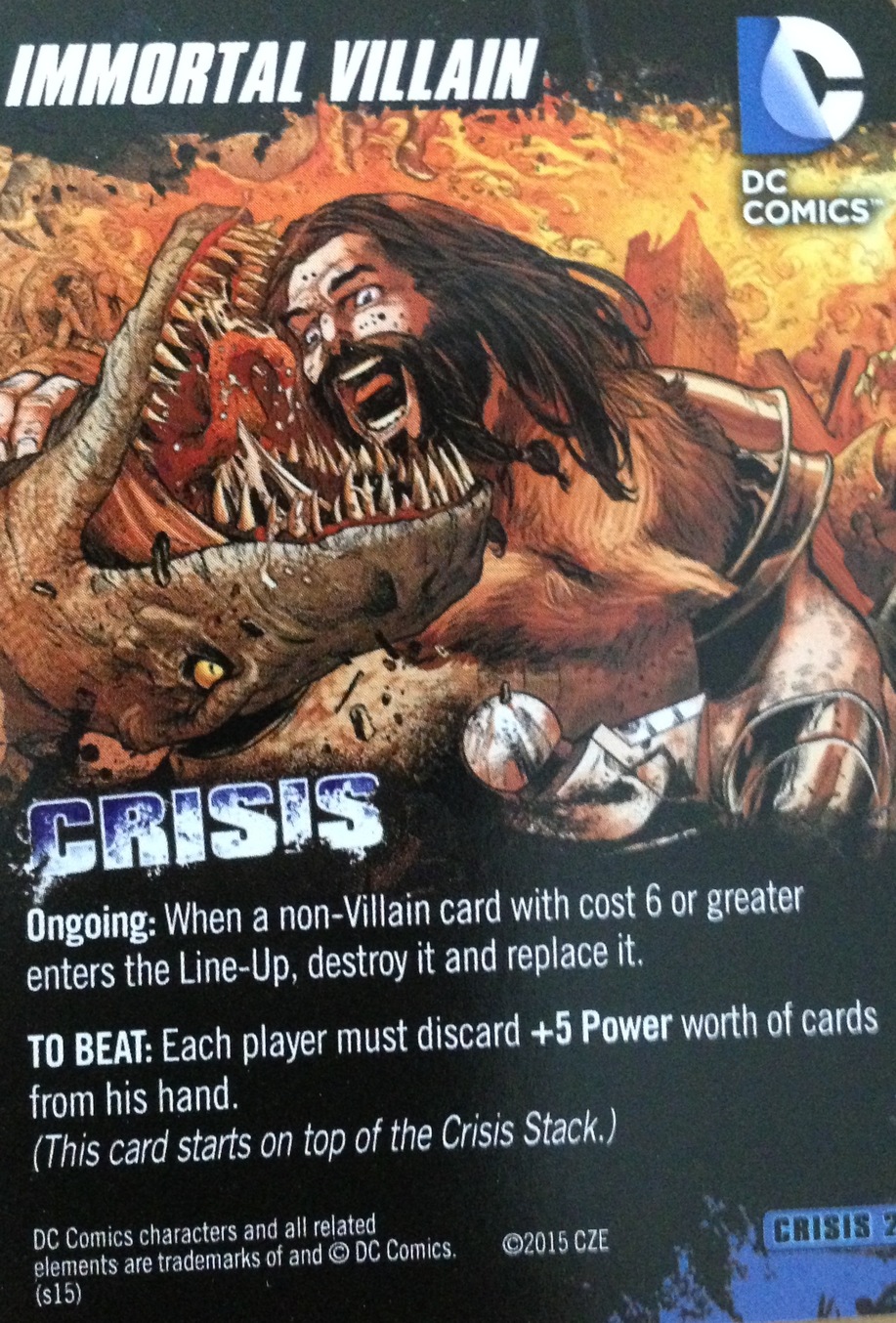 The first thing to note about Crisis Mode is that it introduces a fourth stack of cards for use during the game: the Crisis stack. Crisis cards are a new obstacle that players must face, and they represent major events taken from the DC Universe storylines. Each Crisis card has game text stating its negative impact on the group as a whole, as well as listing the requirement needed to overcome it so that you can move on to the next one. Both ‘Crisis’ expansions include 15 different crises. The specific number of these cards that get used in a game is dependent on the number of players. In this particular set, “Immortal Villain” always begins the game on the top of the Crisis stack. 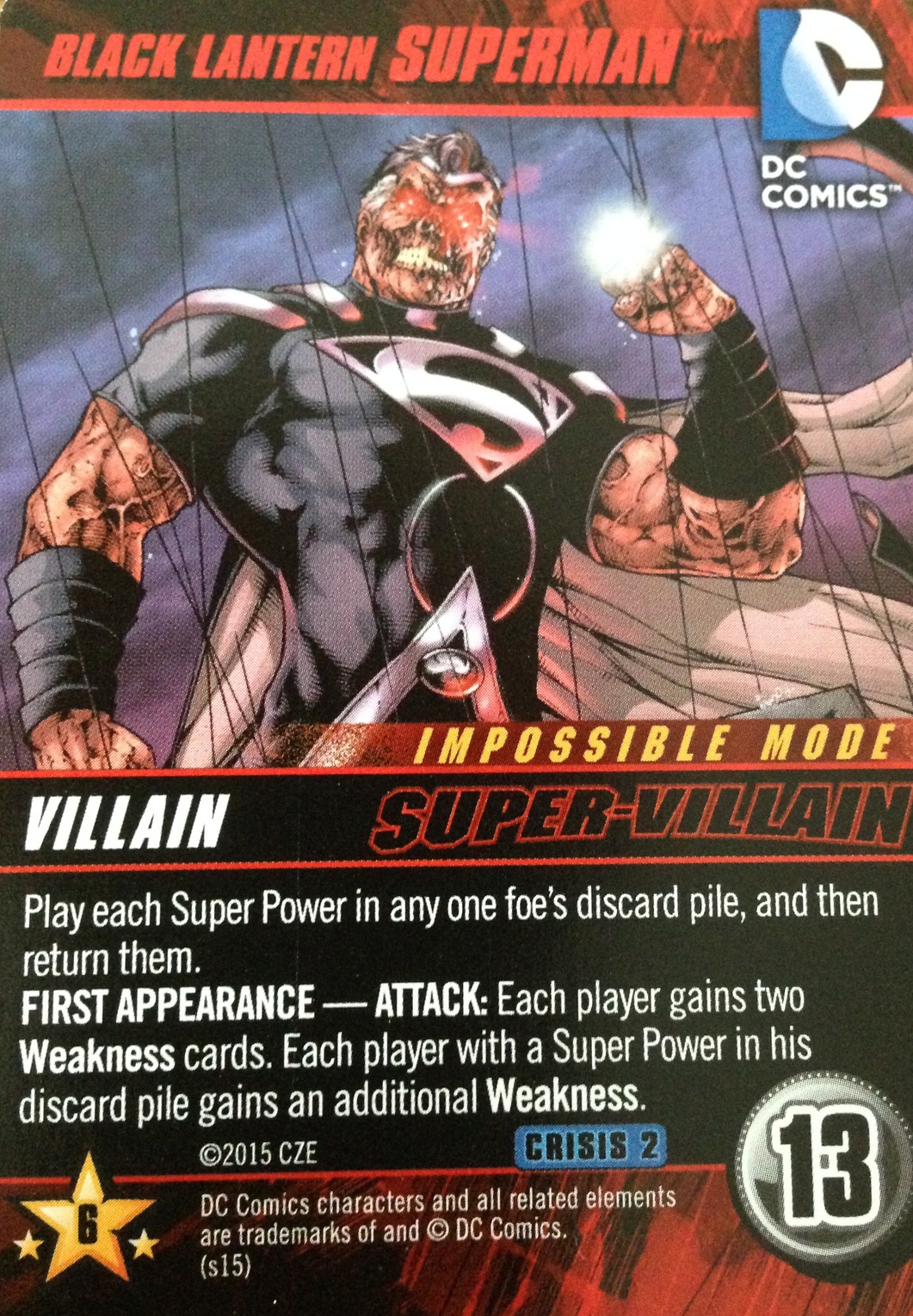 Not only that, the Super-Villains that you must wade through over the course of the game have leveled-up too. The ‘Crisis’ expansion packs contain “Impossible Mode Super-Villains” to replace those found in the standalone sets, and they’re nastier than ever. All 12 of the Super-Villains from ‘Heroes Unite’ have been upgraded to “Impossible” status here in ‘Crisis 2’. Plus, there are three brand new ones. (I won’t spoil them all for you, but one of these beasts is Black Lantern Superman.) Just like ‘Crisis’ cards, the number of Impossible Mode Super-Villains that you will have to defeat depends on the number of players in the group. The starting “impossible” encounter is always the same (in ‘Crisis 2’, it’s Impossible Mode Vandal Savage), but in addition, the final “impossible” Super-Villain is the same each and every game as well. What I particularly like is that you can even use Impossible Mode dudes in non-Crisis Mode games if you’re feeling brave and looking for a tougher challenge. 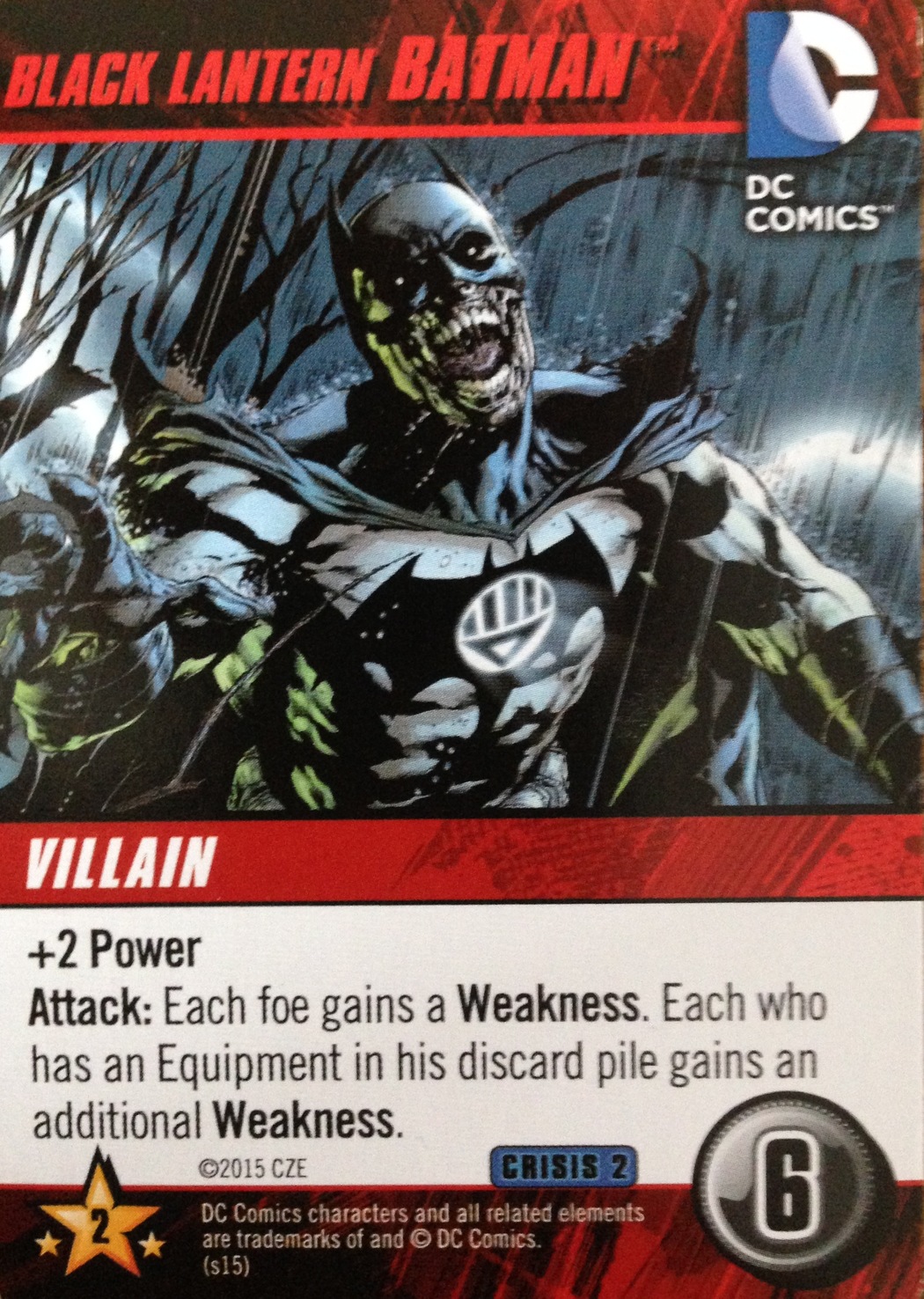 There’s only one way to win in Crisis Mode: You have to beat the aforementioned final Impossible Mode Super-Villain. But here’s the kicker: Players may only attempt to defeat the current Super-Villain until after they’ve beaten the current Crisis. And in order to overcome a Crisis card, players must first defeat any Villains currently showing in the Line-Up. That isn’t as easy as it sounds, especially since the Line-Up in Crisis Mode can get pretty big fairly quickly as one card is added every turn (which is different from the normal game). To complicate matters further, in Crisis Mode villains aren’t normally added to player decks after being defeated unless otherwise specified. So, you’re taking something out and not really gaining anything in return. But hey, it’s a small price to pay for the benefit of the team. 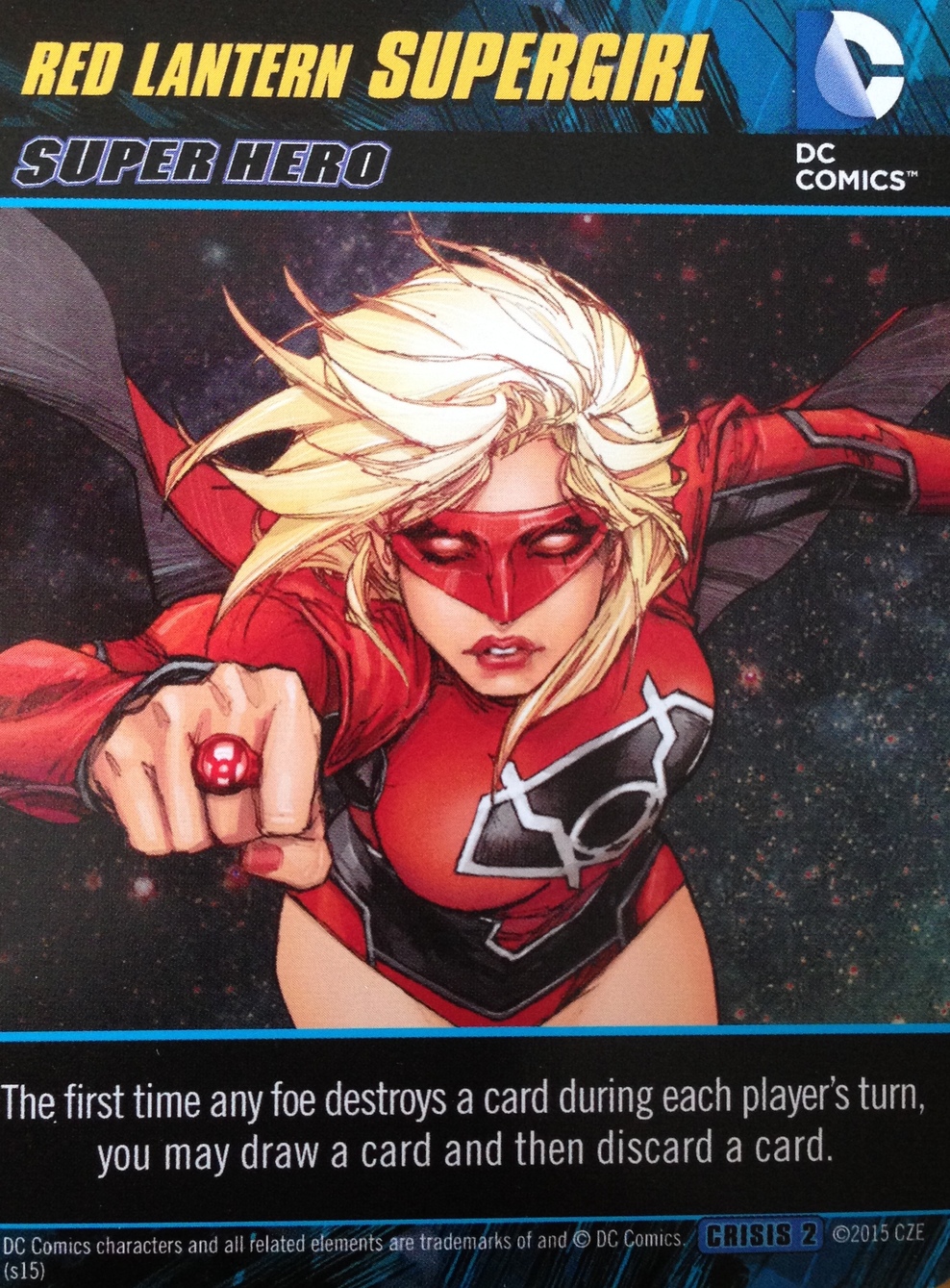 ‘Crisis 2’ also expands your heroic roster by including a subset of oversized Super Hero cards with new and helpful abilities. More than half of these 14 cards are updated versions of previously released heroes (like Batgirl and Black Canary) recommended for use in Crisis Mode only. However, six of them are all-new and can be used in either the competitive or cooperative modes of play. These Lantern-themed heroes are: Red Lantern Supergirl, Star Sapphire, Saint Walker, Kyle Rayner, White Lantern Deadman and Indigo-1.

Crisis Mode is a fun alternative to the standard game, but it also increases play time considerably. The addition of the Crisis cards really tends to slow things down because you’re essentially doubling the things you need to beat in the game. Just to give you an idea, our game over the weekend took nearly three hours to complete. (We lost, but made it all the way to the final Super-Villain.) Fortunately, the ‘Crisis 2’ set addresses this somewhat by adding a new optional rule I’ll definitely be using in the future to help speed things up:

“For a shorter game length, cut the main deck down to 100 cards and reduce the number of Super-Villains by 3.”

The only other real downside to Crisis Mode is that sometimes you can find yourself stymied by a specific Crisis for quite a while when you’re unable to meet its prerequisites. For example, my group was stuck on Reshaping Our World for about half an hour because, in order to get rid of it, each player has to reveal the top card of his/her deck – and they all need to have a different cost. While that may not be all that bad in a 2-3 player game, with five (like we had) it had us wondering if we were ever going to get past it. On the plus side, there aren’t nearly as many of these here as there are in the first ‘Crisis’ set, but they still exist and have the potential to lock down your game.

All in all, if you’re a fan of the ‘DC Comics Deck-Building Game’, and especially if you already own ‘Heroes Unite’, the ‘Crisis 2’ expansion pack is a good buy. It offers a new and fun way to play. If you don’t like Crisis Mode for some reason, the six Super Hero cards and even the Impossible Super-Villains are a worthy addition to the base game. The package also includes over 30 new Main Deck cards for added value.