Remember how great ‘Alias’ used to be? You know, during its first couple of seasons, before it fell to crap in the later years. The producers of USA’s new spy series ‘Covert Affairs’ sure do. The show is more or less a shameless ‘Alias’ clone. That’s OK, I’ll forgive it. I miss ‘Alias’, and the first episode of this one, ‘Pilot’, is well-made, decently-written, and a fair amount of fun. (Spoilers after the break.)

At one time, ‘Coyote Ugly‘ starlet Piper Perabo was supposed to be the Next Big Thing in Hollywood. That never happened, and she fell into a rut of doing TV guest spots and the occasional forgettable movie. Now she’s back in center stage as Annie Walker, a CIA recruit yanked out of training a month early for a special assignment. Walker’s an ace at driving and deception, and speaks six languages. She’s also fearless about taking on new challenges. At the same time, she has an endearingly sunny and optimistic personality.

Some backstory tells us that Annie joined the CIA after a three-week whirlwind affair with a hunky guy named Ben. (Flashbacks to this storyline look like a remake of ‘The Blue Lagoon’. Seriously, they’re weird.) That relationship ended badly when Ben ditched her in the middle of the night. Annie vowed never to let herself be used again.

Walker is assigned to the fictional Domestic Protection Division, headed up by Peter Gallagher as Director Arthur Campbell. She will report to Campbell’s jealous wife Joan (Kari Matchett, who’s been in a hundred TV shows but is probably best know from ‘Invasion’ and Season 6 of ’24’). Of course, there’s also a quirky tech ops specialist – a blind guy named Auggie who uses a nifty laser pointer for a walking cane and has all sorts of neat gadgets that feed him info through a pair of headphones. He’s played by Christopher Gorham from ‘Ugly Betty’, who is decidedly not blind in real life. I’m waiting for the twist when we learn that Auggie isn’t either; that’ll probably be a season finale type of surprise, won’t it? 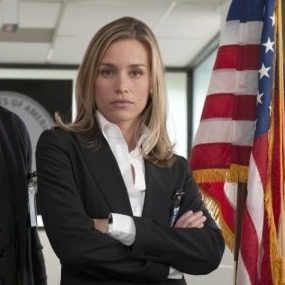 Anyway, Annie is ordered to go undercover as a call girl and meet up with a Russian assassin who’s offered to trade some intel to the CIA. Unfortunately, as soon as she gets to the hotel room, her contact is taken out by a sniper. The intel turns out to be useless anyway. Later, Annie figures out that he wasn’t the real Russian assassin in the first place, just a decoy. The real one wanted to fake his death so that he could complete a hit against a Russian journalist on a book tour in Washington D.C. Walker foils the scheme, chases the assassin, has a fight scene in a subway station, and is almost killed until a last minute rescue by… Hey, that guy looks like her ex-boyfriend Ben. What’s that about?

Let’s be honest, the final twist is kind of obvious. The relationship backstory is laid on too thick and referenced too often. It had to come back around. It seems that her CIA bosses know all about Ben, and chose Annie for this assignment hoping to lure him out of hiding. Also, there’s a leak in the CIA feeding stories to a newspaper reporter, and Campbell needed someone fresh out of training who wouldn’t be corrupted yet.

‘Covert Affairs’ is produced by ‘Bourne Identity‘ director Doug Liman. Even though he didn’t direct ‘Pilot’ himself, the episode has slick production values and some well-orchestrated action scenes. Annie is a very likable character (patterned in no small degree after Sydney Bristow from ‘Alias’). Also following the ‘Alias’ mold, the show makes the wise decision to give us a side story where Annie has to maintain the cover of her “normal” life. Her friends and family think that she works at the Smithsonian. In this episode, her sister tries to set her up on a date with an obnoxious guy who talks way too much. The tension of living this double-life should provide good fodder for drama.

This may not be the most original series on television, but I dug the ‘Pilot’ episode and will surely watch again. In its favor, ‘Covert Affairs’ isn’t yet burdened by any of the ridiculous sci-fi nonsense that eventually capsized ‘Alias’.