Bad things usually tend to happen in threes, so it was probably inevitable that something would go wrong on the final day of the Calgary Expo. Instead of heading to the convention early Sunday morning, I was rushed by ambulance from my hotel to the Foothills Hospital.

Damn you, Saturday! You really did me in. Between the excitement/exhaustion from a 14-hour ironman excursion at the Expo, on top of the lack of food and drink intake (there were only like three concession stands in the ENTIRE complex, so I only had some water and Gatorade), I was doomed when I finally made it back to my hotel around 11:30 PM.

I tried to eat and drink in my room, but I was suffering through a killer headache and was starting to feel nauseous. So, I went to bed to try to sleep it off, but by morning, I had thrown up everything from the prior evening. That’s when I knew that I was in serious trouble.

Not long after my arrival at the Emergency Room via ambulance, I was informed of what I already suspected. I was severely dehydrated and run down so much that my system had started seizing up. Apparently, my blood sugar was also so out of whack that the doctors thought I was diabetic. Needless to say, I wasn’t going to make it back to the Expo. I ended up spending a week in the last place I wanted to be.

Funny story, though: On my third day in the hospital, two male nurse’s assistants (I’m guessing) come into my room and start to reach for my blankets. So I ask them, “What are you doing?” And one of them replies, “We’re here to change your diaper.” I’m like, “WTF? I’m not wearing any diaper. Get the hell away from me!” I guess there must be a lot of diaper-wearing on the cardiac ward, which was where I ended up staying for some reason.

Alas, I don’t have any coverage for the Sunday at the Expo. It’s a real shame, because not only did I miss the ‘Battlestar Galactica’ panel, ‘The Walking Dead’ panel, and Patrick Stewart’s panel, but John De Lancie (who played Q in the ‘Star Trek’ franchise) was a surprise guest on Saturday evening and signed autographs the next day. So I missed him, too!

Sadly, all I have to leave you with is another photo of a couple of costumed fans, which I think is appropriate since ‘The Avengers’ is so hot right now: 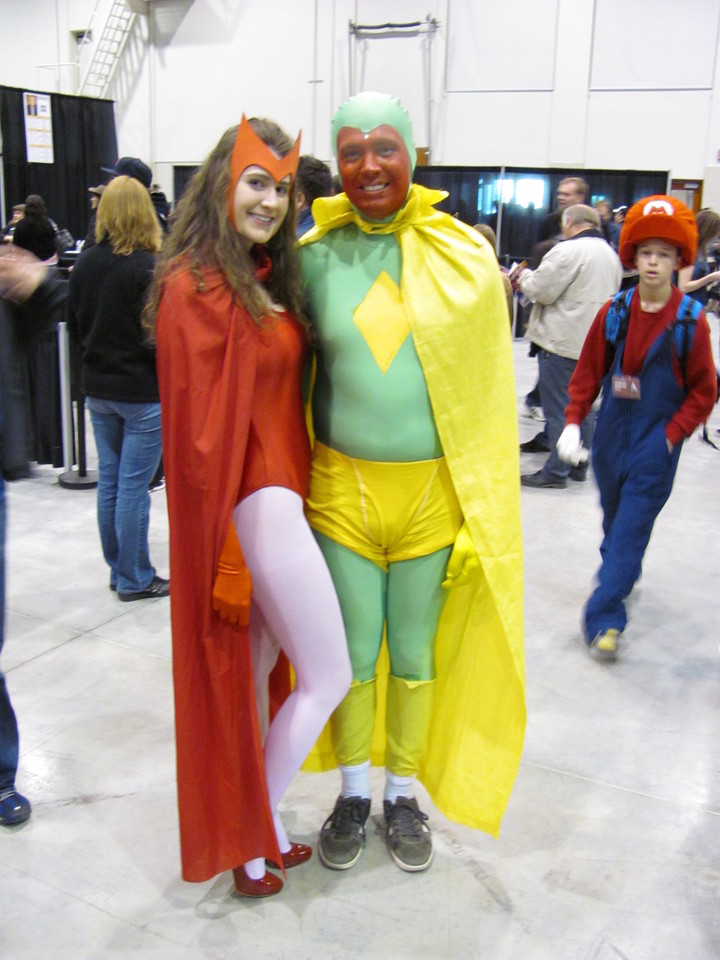 Despite my week-long hospital stay, I’m still glad that I made the trek to the 2012 Calgary Expo. It really was a once-in-a-lifetime experience that I’ll never forget.