Likely by the time you read this post, I’ll be on my way from Winnipeg to the Calgary Comic and Entertainment Expo, western Canada’s largest pop culture convention (second largest in all of Canada) on April 27th to 29th. This year, the con is also ground zero for the first of only a handful of special events around the world celebrating the 25th anniversary of ‘Star Trek: The Next Generation’. 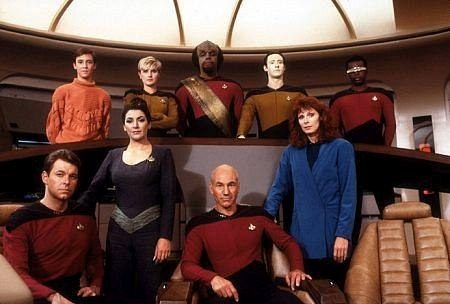 But that’s not all. On Saturday evening (April 28th), a separate event called Star Trek® TNG EXPOsed will be held at the Calgary Stampede Corral. Patrick Stewart, Jonathan Frakes, Brent Spiner, Gates McFadden, Michael Dorn, Marina Sirtis, LeVar Burton, Denise Crosby and Wil Wheaton will be up on stage together in a talk-show style program with special moderators Teddy Wilson, Ajay Fry and Cynthia Loyst. This will be the only time over the course of the weekend that the entire cast will be together on one panel.

All of the initial tickets for Star Trek® TNG EXPOsed have sold out (I got mine!), but apparently the Calgary Expo is releasing some additional tickets via Ticketmaster that are considered overflow seating, so direct sight lines will be obstructed. However, it seems that large video screens will be set up around the arena so that everyone can see the stage.

In support of Make-A-Wish® Canada – World Wish Day on April 29th, the Calgary Expo will auction a piano signed by the ‘Star Trek: The Next Generation’ cast, as well as original pieces from the Calgary Expo’s Annual Artbook, “Dreams & Wishes 2012” (donated by all creator guests and some Artist Alley exhibitors).

This sounds like a lot of fun. I can’t wait to get there!