In these summer months, movie theater screens are dominated by a glut of overproduced, frenetically-paced blockbusters made for and marketed toward an audience almost exclusively of ‘tweens and teens. Rarely seen this time of year are movies for adults. Even the few smaller titles designed as counter-programming hardly seem like films that will stand the test of time. All of the studios, including the indies and prestige labels, are holding out their best releases for awards season at the end of the year. Seemingly against all better judgement, distributor Rialto Pictures has chosen now to court true cinephiles with a new restoration of the Jean-Luc Godard classic ‘Breathless’, which is making the rounds through the art house circuit. I had a chance to see it this weekend. Perhaps I’m just jaded and weary of all the bloated summer nonsense, but for some reason, this felt like precisely the perfect time for something like this.

Truth be told, I have a love/hate relationship with the films of Jean-Luc Godard. Back in my film school days, his movies spoke directly to the pretentious film snob in me, and I couldn’t get enough of them. Over the years, however, my enthusiasm has waned. Recent Blu-ray viewings of former favorites ‘Pierrot le fou‘ and ‘Contempt‘ left me cold. I feel like I’m supposed to still love his movies, and I keep trying to, but I just don’t anymore. Even at the height of my Godard fandom, ‘Breathless’ (original French title: ‘À bout de souffle’) – which was his first film and often regarded as his masterpiece – was never one of my favorites. I always found it a little overrated, and preferred those others above it. So it was with all of this baggage hanging over my head that I went into the (surprisingly packed) screening over the weekend.

Honestly, I’m still not convinced that I love ‘Breathless’. I found myself alternately bored and engaged as the movie played. Unfortunately, I really have no way to knowing how much of that is the fault of the movie, and how much is the result of my own prejudices as a filmgoer. What I will say is that I liked this one more than I remembered, and will shuffle it back to the top of the Godard list. For now, anyway. I reserve the right to change my mind if I revisit his films again in the future.

‘Breathless’ is the tale of Michel Poiccard (Jean-Paul Belmondo), a petty thief and schemer who’s seen far too many Hollywood gangster movies and patterns all of his behavior on his favorite screen anti-heroes. Near the beginning of the picture, he kills a police officer. It’s never explained why he killed the cop, other than that’s what criminals do in movies and it must have seemed like a good idea at the time. Despite this, he somehow manages to come across as a generally likeable and charismatic scoundrel with his head in the clouds. Michel drives to Paris and exclaims, “Murderers murder. Lovers love. Isn’t the Place de la Concorde beautiful this time of year?” Once in the city, he spends most of his time flirting with a pretty American girl named Patricia (Jean Seberg). She speaks more French than I do, but certainly doesn’t speak it any better than I could. Nonetheless, her awkwardness with the language is endearing, and is one of her greatest charms. 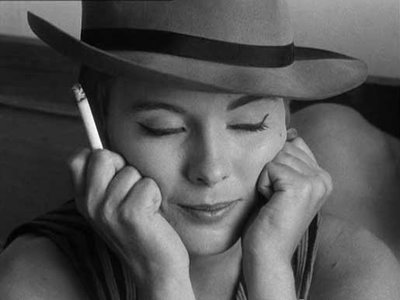 We’re informed at various points in the story that the police are closing in on Michel, but he never seems particularly concerned about it. He doesn’t make much of an attempt to lie low. He continues to pick pockets, mug a few people, and steal a string of cars, all the while repeatedly trying to contact a friend who allegedly owes him money. The character’s cavalier attitude is reflected in Godard’s filmmaking, which continually defies genre conventions even as it winkingly references them. Where another film on this subject might try to build the suspense of the hunt, Godard takes a nearly 20-minute time-out to have his characters lounge about in bed and talk about the frivolities of life. What they say is almost completely inconsequential, but the scene is riveting all the same. In comparison to Hollywood product of the same time, the characters in ‘Breathless’ are refreshingly frank and open in talking about sex, which they freely discuss without any puritanical moral hang-ups.

Godard never much cared about things like story or plot in his movies. What passes for narrative here is just a frame to let his characters and themes drape over. And yet, as his first film, ‘Breathless’ actually has a story that’s coherent and easy to follow. That’s a lot more than can be said about his later works, which generally don’t. As the years went on, Godard developed an active contempt for the conventions of narrative, and eventually did away with them entirely.

While he doesn’t go nearly that far here, the director had already begun his experiments to deconstruct the language of cinema. ‘Breathless’ is famous for his use of jump-cuts. In many scenes, Godard edits the dialogue to follow a flow that he likes, without any consideration at all for visual continuity. At the time, it was considered a liberating breakthrough in film form. Fifty years on, the affectation often feels overdone. It works pretty well in some scenes, but is just kind of annoying in others.

As I said, I still don’t think that I love ‘Breathless’. Even so, I appreciated the opportunity to see it on the big screen in a sparkling restoration that brings out all the best in Raoul Coutard’s black & white cinematography. His use of natural light is simply gorgeous on film. And it’s astounding to contemplate how he achieved such remarkably smooth handheld camera work without the benefit of a Stedicam (which wouldn’t be invented for nearly another two decades). His camera glides effortlessly through all manner of complicated scenes with nary a shake or jostle. Really, pay attention to this as you watch; it’s amazing.

In addition to the lovely photography, ‘Breathless’ is filled with beautiful people, beautiful wardrobe, and beautiful locations. Watching the movie is like a trip back in time to Paris of the late 1950s. Even if, like me, you don’t wind up loving the movie, a journey like that is surely worth spending an hour and a half at the cinema.