The studio bosses at Buena Vista announced back in March that they were pulling the plug on the long-running ‘At the Movies’ review program originally made famous by Siskel and Ebert, later sullied by “the two Bens,” and finally turned respectable again with current hosts A.O. Scott and Michael Phillips. The final episode taped this week and will air on Sunday. Say what you will about any of its hosts, this show was an institution and deserved better treatment than it received in recent years.

Technically, the series we now know as ‘At the Movies’ has a very convoluted history that traces back through several previous programs. Roger Ebert and Gene Siskel first began reviewing movies together on television in 1975 for the PBS series ‘Sneak Previews.’ They left that show in 1982 due to a contractual disagreement, and went on to form their own new program called ‘At the Movies with Gene Siskel and Roger Ebert’. (‘Sneak Previews’ was taken over by Jeffrey Lyons and Michael Medved. The less said about that abomination the better.)

So, this new ‘At the Movies’ show was produced by Tribune Entertainment and ran from 1982 to 1986. The two critics then left again due to another contractual dispute. Rex Reed and Bill Harris (later Dixie Whatley) took over until the show was canceled in 1990.

In 1986, the original two critics signed with Buena Vista and started ‘Siskel & Ebert and The Movies.’ That lasted until Siskel’s death in 1999, whereupon the show was retitled ‘Roger Ebert & The Movies.’ Ebert went through a series of temporary guest co-hosts until settling with Richard Reoper in 2000.

The new program was called ‘Ebert & Roeper and The Movies’ for one year, and then simply ‘Ebert & Roeper.’ In 2006, Ebert stopped actively appearing on television due to his health issues. However, he continued to be associated with the show, which retained his name.

Even without Ebert on air, the show was retitled to ‘At the Movies with Ebert & Roeper’ in 2007. Roeper continued to host with a rotating series of co-hosts until 2008. At that point, both Ebert and Roeper walked away due to a dispute with Buena Vista over the direction the studio wanted the series to take.

Then we have the dark year. Under the shortened title ‘At the Movies,’ Buena Vista revamped the format of the show hoping to attract a younger audience. New hosts Ben Lyons (son of Jeffrey Lyons) and Ben Makiewicz were hired. They were a total disaster. Lyons especially was totally unqualified to even pretend to be a film critic. The program was more focused on celebrity name-dropping than movie reviewing, and quickly became a laughingstock. 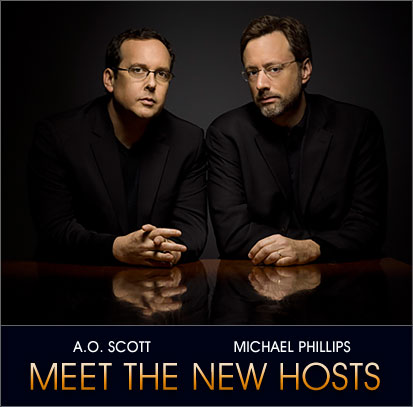 While that only lasted a year, the damage was irreparable. Buena Vista tried to mend fences by bringing in legitimate film critics A.O. Scott (from the ‘New York Times’) and Michael Phillips (from the ‘Chicgo Tribune’). The show returned to a classic movie review format with intelligent discussion and analysis. However, the audience had already left and didn’t come back. The two Bens destroyed the series so thoroughly that no one could revive it.

And now, after all this history, ‘At the Movies’ is down for the count. In the final episode, Scott and Phillips will review new releases ‘Eat Pray Love’ and ‘The Expendables’ and will feature some sort of retrospective look back at the show’s 35 years.

I’ll be honest and admit that, as hard as Phillips and Scott have tried to return the program to respectability, the show was just never the same after Ebert left. Or even, frankly, after Siskel died. (I was never much of a fan of Richard Roeper, but he did start to grow on me at the end.) Regardless, this is a sad day. With ‘At the Movies’ gone, there is really no other outlet for genuine film criticism on American television at the moment. That’s a damn tragedy.