Terrific news for VIZIO P-Series owners. When your 4K Ultra HD displays debuted earlier this spring, Dolby Vision was included right out of the box, with VIZIO promising to add the open format High Dynamic Range specification -- HDR10 -- in a future firmware update. In other words, if you scooped up a P-Series, you've been enjoying 4K content with Dolby Vision on VUDU UHD and Netflix, but not any of the current Ultra HD Blu-rays.

Well, friends, the wait is finally over. The VIZIO P-Series now supports HDR10 and Dolby Vision. 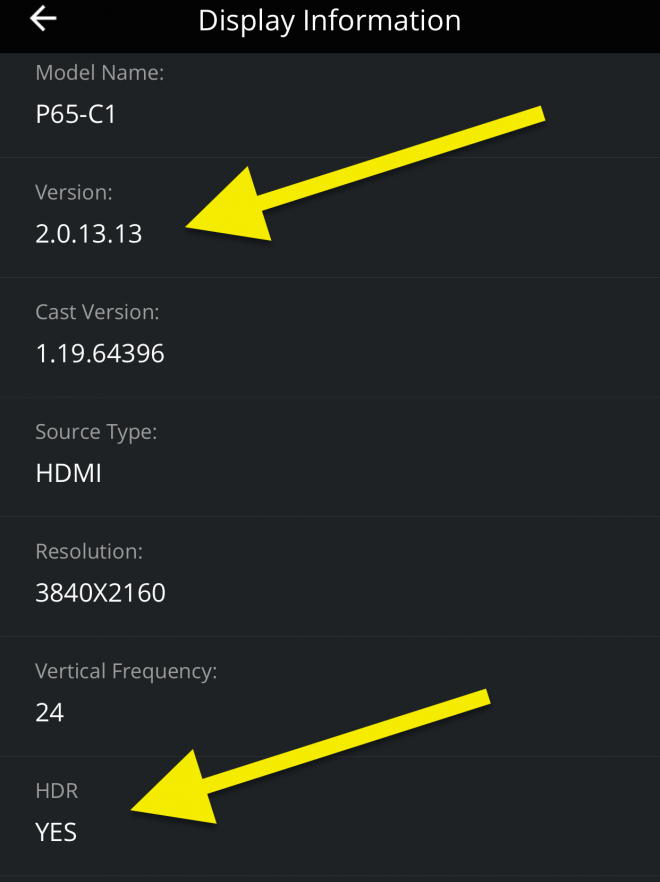 HOW TO CHECK IF HDR IS ENGAGED ON YOUR P-SERIES

While I wish it wasn't so buried, it's easy to tell whether or not your P-Series is displaying HDR content. From your SmartCast app, tap the Settings widget --> System --> System Information --> Display Information.

In addition to your display's serial number, you'll see your current firmware, your SmartCast firmware, input source, resolution, frame rate ("vertical frequency"), audio type, and whether or not HDR is engaged. If it says YES, you're watching HDR10 or Dolby Vision.

When the firmware update hit our loaner P-Series last Thursday, I immediately popped in 'Kingsman: The Secret Service' to see if HDR10 had arrived and, for a moment, I thought it wasn't working.

Turns out you need to adjust one more setting... 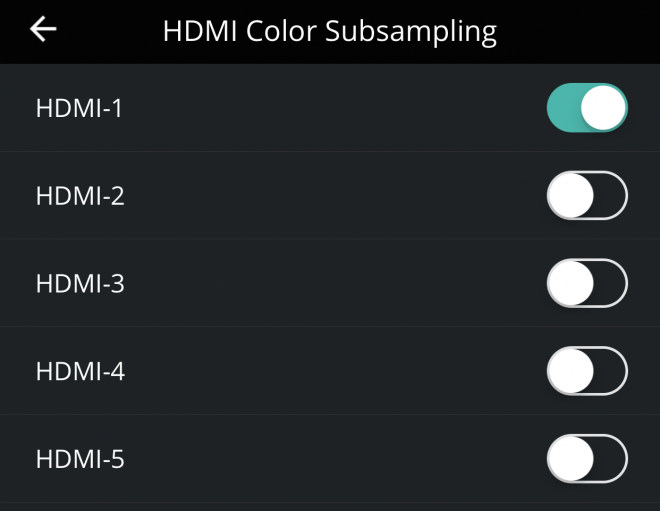 HOW TO ENJOY HDR10 VIA HDMI ON THE VIZIO P-SERIES

While Dolby Vision and HDR10 can now be enjoyed via Cast streaming content, HDR won't work with HDMI sources unless you enable HDMI Color Subsampling.

To do this, from our SmartCast app, tap the Settings widget --> Inputs --> HDMI Color Subsampling --> and enable it for the HDMI input to which you've connected your Ultra HD Blu-ray Player.

From this point onwards, your display will now play HDR content via streaming as well as HDMI. (To double check this, please see the previous section.) I route all video sources though a Denon AVR-X6200W to HDMI 1, which is also the ARC input. From what I've seen so far, turning on HDMI Color Subsampling does NOT affect the color accuracy and look of SDR content. 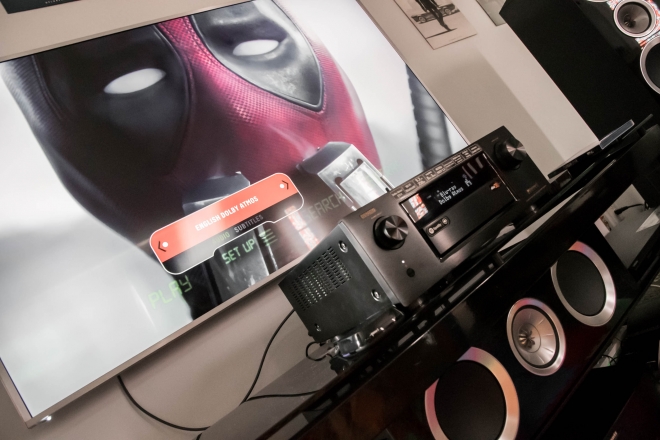 HOW DOES IT LOOK?

In a word: awesome.

With the dozen or so discs I have on hand, the results are just as positive as they are with VUDU UHD titles. Hell, my wife walked into my living room twenty minutes ago, stopped short to gawk at the P-Series, and said "my God, it's like 3D."

Thanks to FALD and a true 10-bit panel, the P-Series renders Ultra HD Blu-ray content with accuracy and vibrancy. 'The Martian' delivers bold red planet surfaces while 'Kingsman' and 'Deadpool' offer up more saturated colors and highlight details (the skies really open up). And 'Sicario', which I'm watching right now for review, looks dramatically better than its SDR Rec709 iteration thanks to more details in the bright areas along with deeper black levels and boosted shadow detail.

In other words, I'm out-of-the-box impressed and can only imagine what calibration would do it improve overall HDR performance (I'm fairly certain separate Dolby Vision and HDR10 calibrations will be necessary, but will have to reach out to VIZIO to get more information).

8.10.2016 UPDATE: It initially appeared as though the P-Series was different than other HDR-capable displays, which automatically ramp up backlighting to 100% for HDR content. After this firmware update, our loaner model's Backlight setting dropped from 85%, in "Calibrated" picture mode, to 50%.

However, in speaking with VIZIO, we learned the P-Seires does in fact change the display's backlight to 100% when HDR content is detected, while at the same time changing the functionality of the "Backlight" setting itself. During HDR content, instead of raising or lowerling backlight, "Backlight" now adjusts "midtone levels without chaning the peak brightness or blacklevels." The default setting is 50%. 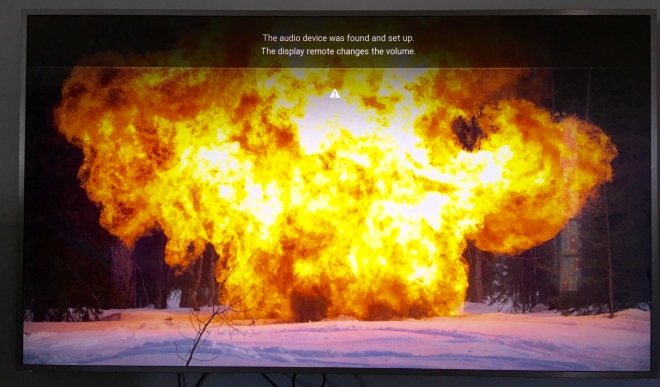 DID ANYTHING ELSE CHANGE?

I'm not sure, at this point, what else was included with firmware update 2.0.13.13, but it's looking like one of my bigger bugs may be gone as well (the display would repeatedly find and set up my AVR, causing picture and audio dropouts), which is terribly exciting.

On the flip side of the firmware coin, there may be a new bug.

When I power up my system using the Logitech Harmony Elite (review this week), the AVR input changes to TV Audio even though Blu-ray is selected; normally, this would only happen when the P-Series was Casting content. I'll monitor this situation as well. 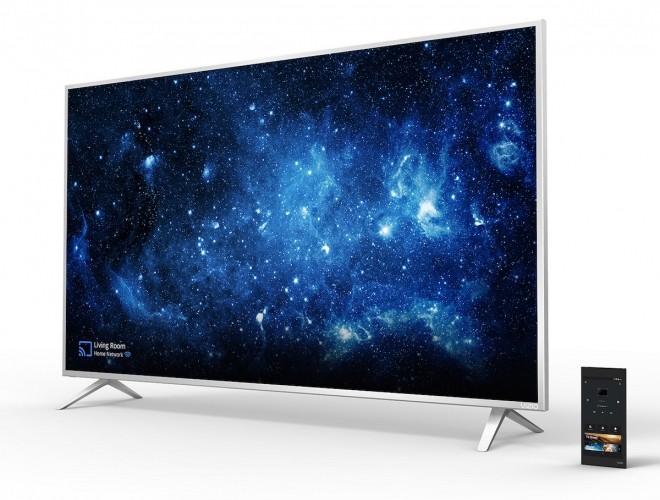 WHERE DOES THIS LEAVE US?

The VIZIO P-Series is now the most affordable Dolby Vision & HDR10 capable UHD display on the market with a true 10-bit panel. And, while most of its picture quality competition comes from flagship level TVs, the only other model in this ballpark is the LG 65UH9500 UHD LED TV, which does include 3D as a feature, but does NOT have FALD and, from what I've seen and read, can't deliver the same deep black levels.

Any P-Series owners trying out HDR10 content yet? How's it working for you so far? Hit us up in the forums or the comments below.

UPDATE 8.10.2016: VIZIO confirmed this morning in an official press release that BOTH the 2016 P-Series and M-Series Ultra HD Displays are now HDR10 capable after the 2.0.13.13 firmware update. FYI, it's worth noting that, while the M-Series is HDR capable, it does not feature wide color gamut. Here's VIZIO's full press release:

Irvine, CA - August 10, 2016 - VIZIO, Inc. announced today a new firmware update (v2.0.13.13) across its VIZIO SmartCast P-Series and M-Series Ultra HD HDR Home Theater Displays that enables support for the HDR10 format specification on HDR Blu-ray players.  While both P- and M-Series collections launched with Dolby Vision content support out of the box, the HDR10 update expands compatibility of these displays with HDR discs played on existing UHD Blu-ray players from Samsung (UHD-K8500) and Philips (BDP7501/F7).  VIZIO is continuing to work to further expand support for additional players as they become available in the market.

In addition to the new firmware update, VIZIO consumers also have access to even more HDR content in the living room.  VIZIO SmartCast P-Series and M-Series users can benefit from the addition of new Dolby Vision HDR titles to the VUDU library. Films like Batman v. Superman, Nice Guys and Keanu will join over 50 Hollywood titles already graded in Dolby Vision and available through VUDU. Dolby Vision content support transforms the entertainment experience with dramatic imaging, incredible brightness, contrast and color that brings content to life.

HDR10 is based on the Rec2020 color space format, but restricted to a P3 color space and a maximum of 1000 Nits in a 10-bit format.  Dolby Vision is a theatrical format, featuring the Rec2020 color space but capable of offering up to a 12-bit format.  Where the HDR10 standard is limited, Dolby Vision content is mastered in Rec2020 and boasts 4000 Nits with the potential to expand even further for more finely-tuned dynamic content.

"When we launched the VIZIO SmartCast P-Series and M-Series Ultra HD HDR display collections, it was always our intent to accommodate the HDR10 standard in addition to our support for Dolby Vision," said Matt McRae, Chief Technology Officer, VIZIO. "While Dolby Vision offers consumers excellent picture quality, it was important to us to give consumers options. VIZIO now offers HDR10 and Dolby Vision compatible displays with some of the best picture quality options available for the home experience."

VIZIO SmartCast P-Series and M-Series users can enable the HDR10 update by first ensuring the display is connected to the Internet. The display will then automatically search for the new firmware update and download it to the display. Once the display has been updated, to enable HDR playback from your HDR-enabled UHD Blu-ray player, open the VIZIO SmartCast remote control app, tap "Settings" and press "Inputs" then "HDMI Color Subsampling" and then enable subsampling for the HDMI port the HDR-enabled Blu-ray player is connected to.
For more information on VIZIO SmartCast visit VIZIO.com and for questions about the recent HDR10 update, visit support.vizio.com.