Some exciting news on the display front, once again proving 2016 to be a very good year for considering a 4K Ultra High Definition upgrade.

VIZIO has not only launched a major overhaul to its well-reviewed P-Series 4K UHD displays, but is releasing this new iteration as the first product to run on a new wireless, entertainment ecosystem dubbed SmartCast.

On top of the announcement, HDD got to demo each model in-person and the results -- eye-popping colors with deep black levels all controlled by a next generation interface -- are indeed promising. Look for a full review in the coming weeks. For now, let's cover what we know: 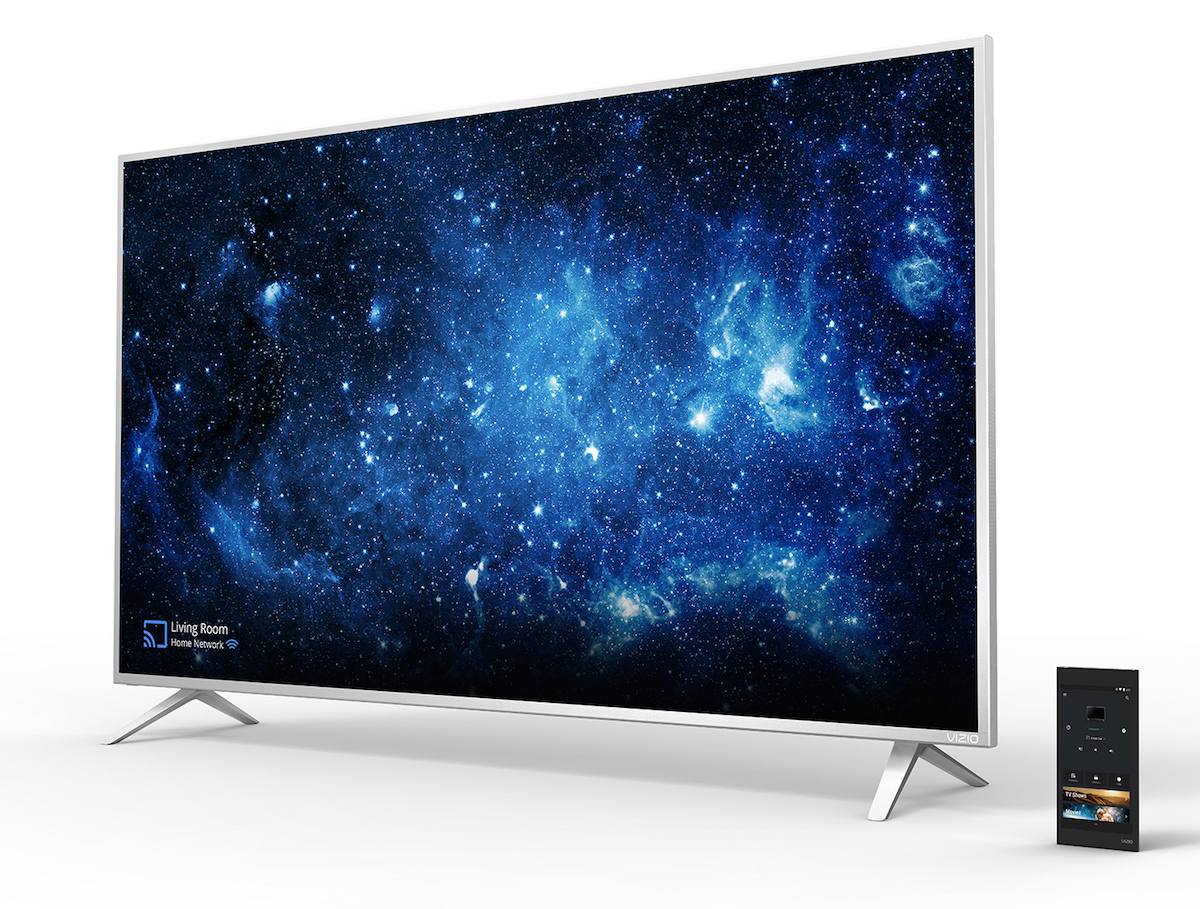 VIZIO has a history of making budget-friendly TVs, but in the last two or three years, they've redefined what it means to be affordable by offering penny-pinching price points for performance features more akin to their competitors' flagship displays. Specifically, I'm talking about Full Array Local Dimming (FALD) -- arrays of individual LEDs that can be turned on and off with more precision -- giving LCD displays better contrast ratios and the ability to hit deeper black levels. Without FALD, LCD simply can't compete with Plasma or OLED technologies.

Previous gen P-Series UHD models boasted up to 72 Active LED Zones, but the new 2016 models feature as many as 128, a nice boost that helps prevent "blooming" -- a flaw caused when smaller bright objects light up against dark backgrounds.

With four sizes entering the lineup -- 50", 55", 65", and 75" -- P-Series UHD Home Theater Displays are the second VIZIO models, after the Reference Series, to offer Dolby Vision high dynamic range with a wider color gamut; Dolby Vision content can be accessed via streaming or HDMI. HDR10 compatibility, a first for VIZIO, is coming too -- about 90 days after product launch. Three out of the four models are built with VA (Vertical Alignment) panels, which according to VIZIO, offer better black levels and overall picture quality when viewed straight on. However, you will lose visible color saturation if seated too far off to the side. Because viewing angles are important to some customers, VIZIO always offers one IPS panel per series. In this case, that's the 55-incher. The trade-off is at the expense of black levels.

The new P-Series can reproduce about 95% of the DCI P3 cinema color space, which is where theatrical and UHD HDR / WCG content is currently being graded (basically, to achieve the wider color space of Rec 2020 today, you'd need a professional laser projection system, and only one scene in the history of cinema -- from  'Inside Out' -- has ever been graded to that space). 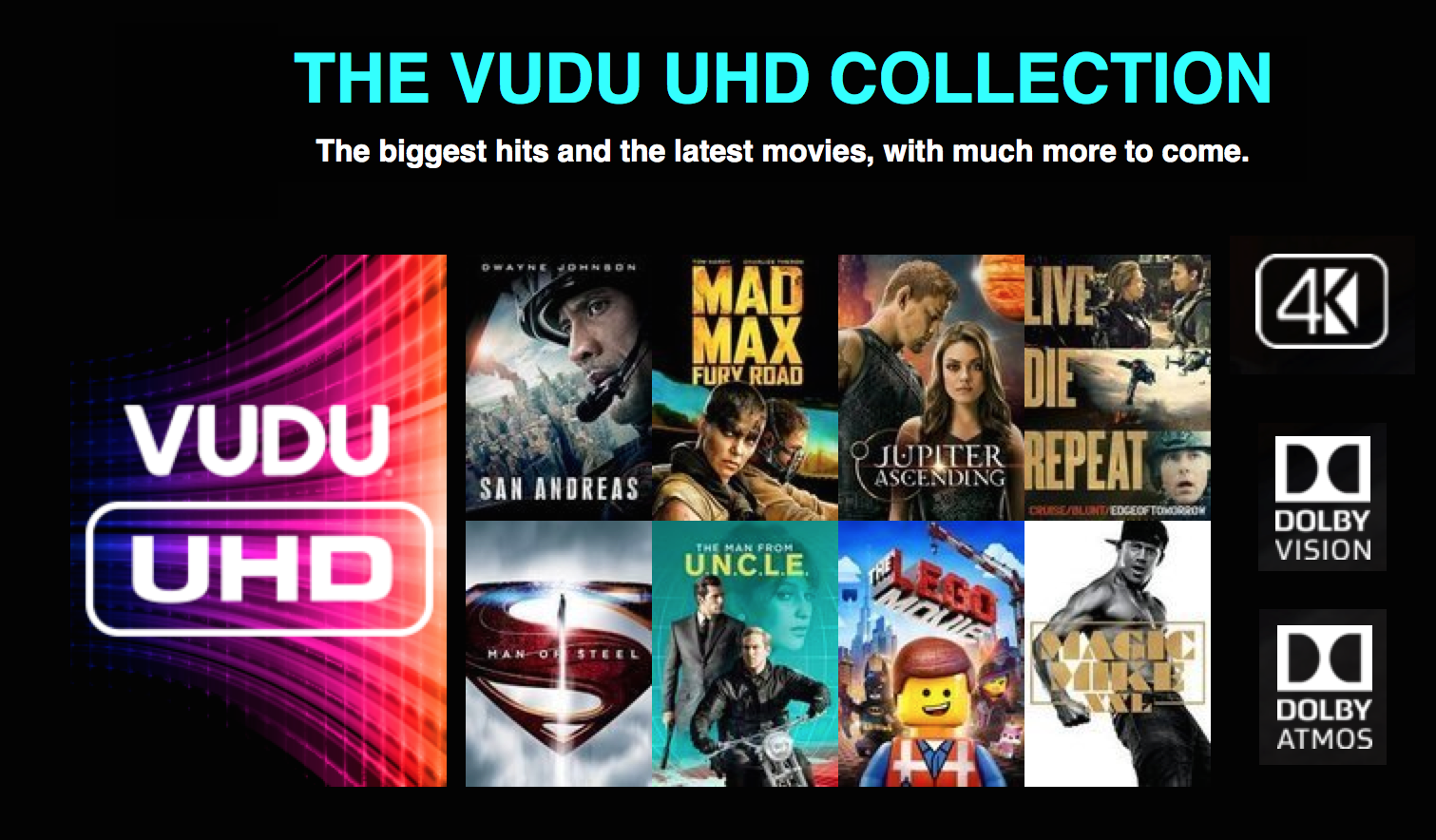 P-Series displays are also capable of outputting up to 600 nits across their entire screen (emphasis on the entire screen). However, smaller bright objects like bomb blasts or fireworks can exceed that measurement. By how much, I'm not sure; VIZIO didn't specify. Technically, this means the P-Series doesn't meet the Ultra HD Premium specification, but VIZIO says whole-screen performance is more important, and a much truer, way to measure peak luminance. In other words, some displays claiming 1,000-nit peak luminance may not be able to achieve such brightness across the entire screen. I'll have to spend more time with one at home, but in our demonstration -- with all the lights off, then all the lights on -- the P-Series looked plenty bright.

The hands-on demo consistent of streaming UHD Dolby Vision content via USB sticks as well as directly from VUDU (click on the image above to see a full list of available titles), highlighting scenes from 'Mad Max Fury Road', 'Man of Steel', and 'Pan'. Each one was awash in detail and rich colors, whether I was six feet away or pixel-peeping close. 'Fury Road' offered more detail in its explosions as well as in the spectral highlights of chrome, and deeper reds pouring out of the flame-thrower guitar. 'Pan' rendered saturated colors exceptionally well. And 'Man of Steel' showed off high dynamic range during the Krypton opening sequence -- dark regions next to a sunset and even brighter, fiery explosions. Also, a Dolby Vision logo -- a painted color wheel against a black background -- showed no hints of blooming. 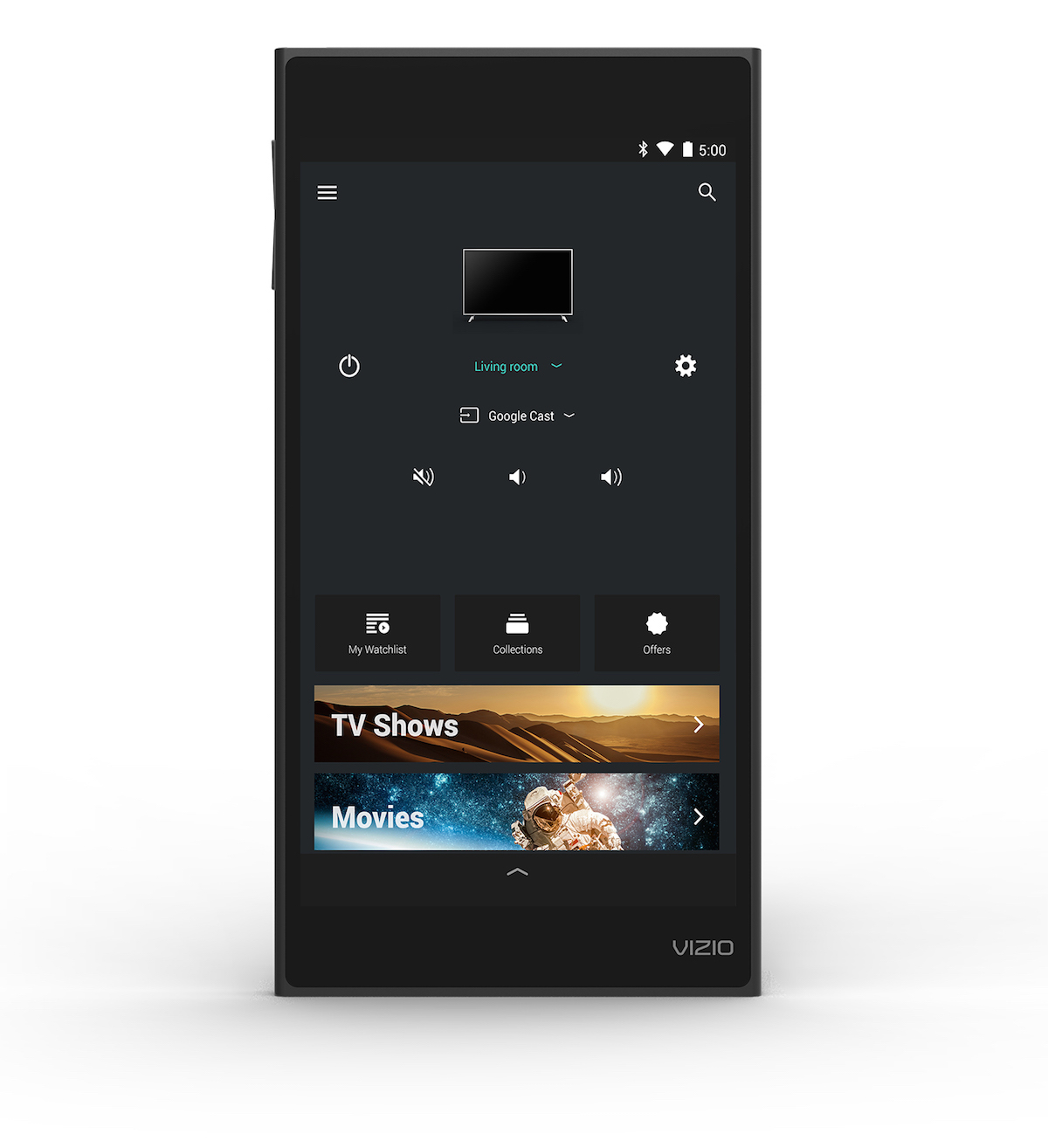 Yes, the televisions themselves are potentially exciting -- I can't imagine many other brands competing with these features at these price points (see below) -- but the P-Series is much more than an UHD display, it's the first product to launch as part of the VIZIO SmartCast ecosystem.

What is SmartCast, exactly? If you're familiar with Google Cast, it's based on that platform. If you don't know Google Cast, here's a LINK, but the quick version is this: Google Cast is a feature already built into many iOS and Android streaming apps like VUDU, Netflix, Pandora, and HULU where, at the click of a button, your smartphone or tablet plays content on an external device. It's a little like AirPlay, but rather than the content running ON your phone and streaming OUT to the display, the display itself does the streaming. Which is how you get access to UHD content with multi-channel surround sound, not to mention Dolby Vision and Dolby Atmos. 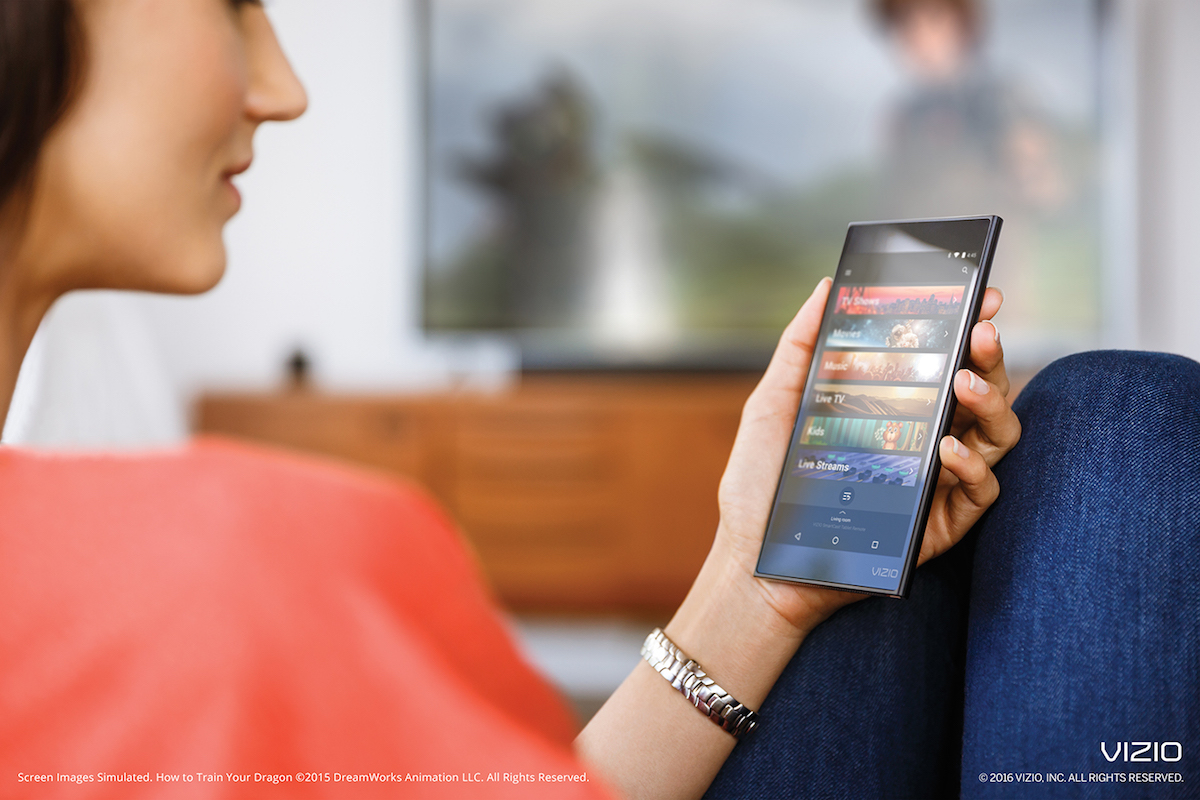 In this sense, VIZIO has re-imagined what it means to have a smart interface. Gone is the standard suite of streaming a/v apps. In fact, outside of a settings menu, the VIZIO P-Seires doesn't have an in-display interface. Instead, P-Series displays run on, and stream content from, the SmartCast app or any app with Google Cast enabled. Meaning, all Android and iOS devices are ready to become P-Series remote controls. Also, you'll never have to -- outside of firmware -- update the display's streaming apps if you keep your smartphone or tablet up-to-date. And, not only can the SmartCast app control the P-Series, it's going to be the cornerstone for a host of VIZIO products from displays to audio gear (more on this below), allowing customers to create whole-home a/v integration.

Oh, and if for some reason a customer doesn't already own an iOS or Android smartphone or tablet, VIZIO's got you covered there too.

Remember that demo I mentioned earlier? About halfway through, there I was ogling the Dolby Vision content and the VIZIO reps start controlling the displays with what looked like an Android phone. Only it wasn't. It was one of two included P-Series remotes. 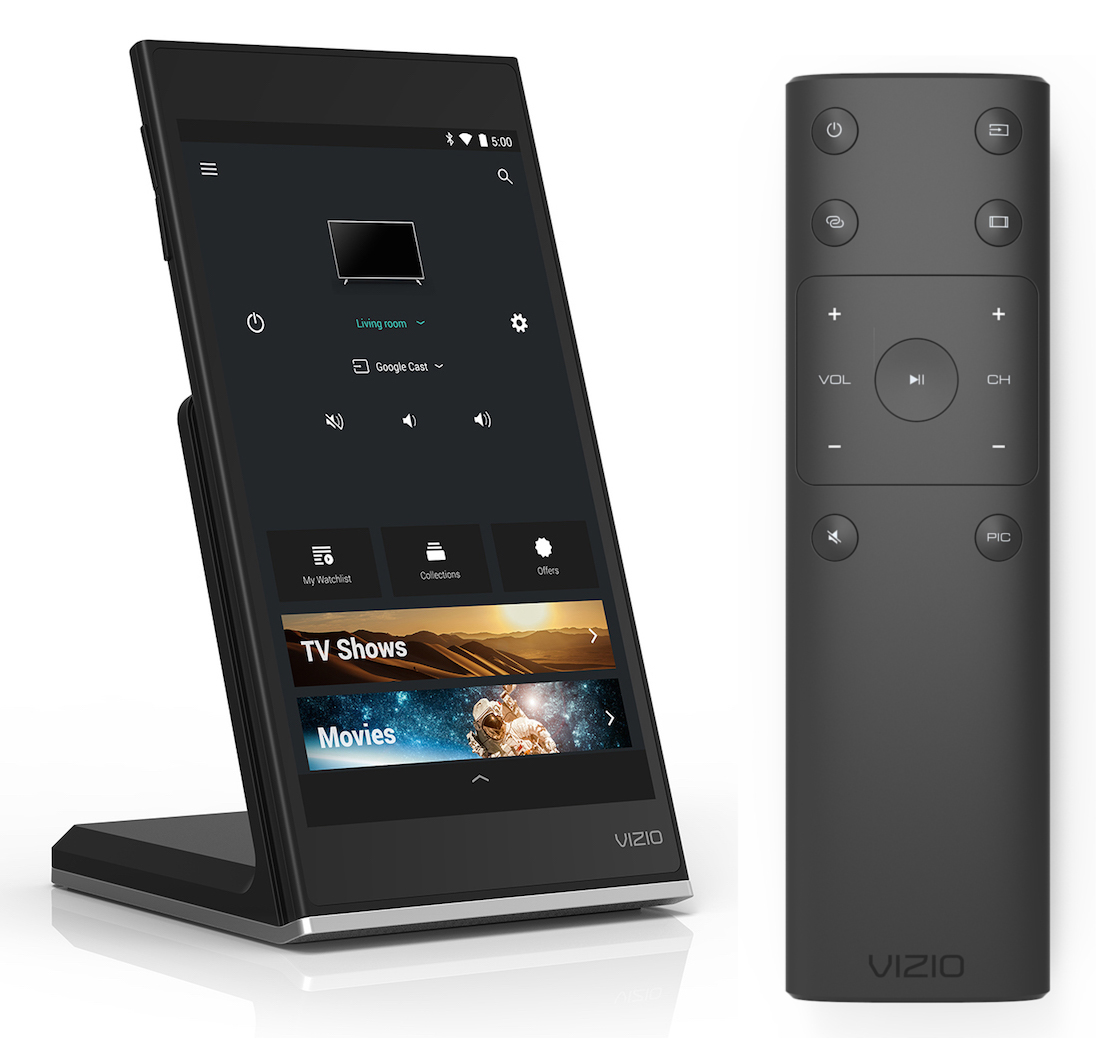 Yup, every VIZIO SmartCast P-Series Ultra HD HDR Home Theater Display includes one 6" Android Tablet Remote (plus a standard IR remote), which comes with a wireless charging station, the SmartCast app pre-installed, and features Full 1080p HD resolution, the Android Lollipop OS, a V8 octa-core processor, stereo speakers, and 16GB of storage. Meaning, not only is the included-tablet a remote for the P-Series, but you can use it as a standalone tablet. Want to watch 'Mad Mad Fury Road' on VUDU, but the Kiddo prefers 'Thomas & Friends' on Netflix? No problem, get 'Mad Max' running on the P-Series, and hand the tablet off to Junior. Battery life is reportedly excellent, with a stand-by charge lasting weeks. In terms of functionality, when you're searching for content to stream, the remote will search mulitple services to let you know where you can watch (or listen).

SmartCast is a different concept for TVs. Heck, without a built-in TV tuner, the P-Series aren't technically TVs. Regardless, these home theater displays are quick to learn and works remarkably well for what limited use I saw. We are definitely looking forward to exploring the SmartCast / Google Cast ecosystem over the next few months.

As mentioned above, the SmartCast ecosystem isn't limited to watching Ultra High Definition content with HDR/WCG -- it's also a solution for whole-home audio that VIZIO plans to integrate into their upcoming soundbars and speakers. Pricing, availability, and full specifications have yet to be announced, but we demoed three of the early SmartCast Audio products:

The first was a 5.1 SmartCast Soundbar (not pictured). Similiar in many ways to the VIZIO SB4051 Soundbar we reviewed earlier this year, the new 41" SmartCast Soundbar featured a three-channel soundbar paired with a wireless, powered subwoofer that has connections for the the two rear-channel speakers. Particularly fun to note -- the 8" sub can be laid flat and placed under couches. We didn't get to demo too much of the full surround experience, but based on VIZIO's history with this product line, this new, slimmer soundbar would make a great option for those who stream a lot of content, want a clean setup, and who aren't interested in Dolby Atmos or DTS:X. It also has the capability to switch between multiple audio sources without disrupting video playing on the P-Series. 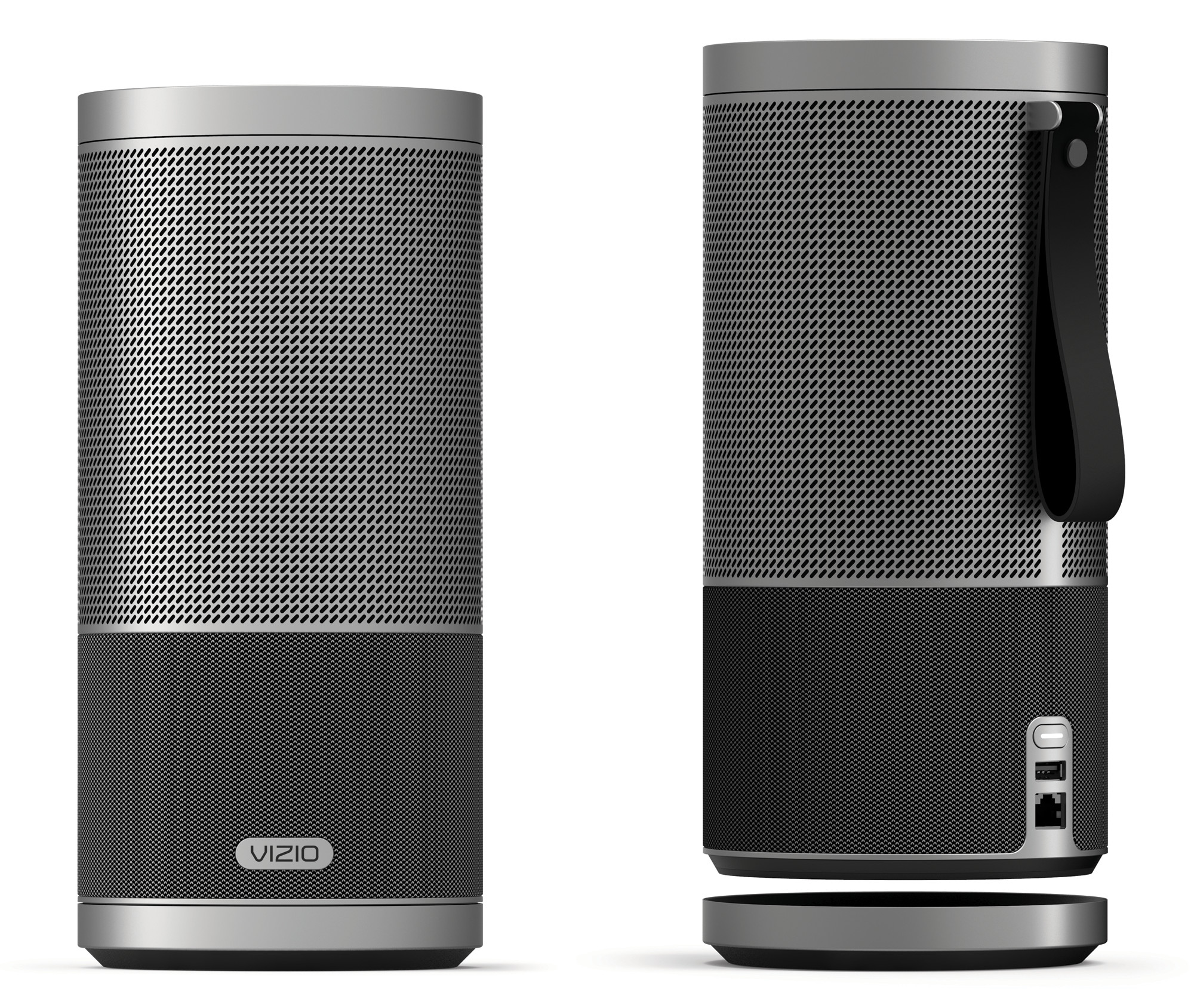 Next we saw the SmartCast Crave 360 wireless speaker. It's a 2.1 speaker that throws stereo sound into a 360 space, and features both Bluetooth and Wi-Fi. It's ultra portable too. See that clean metal portion under the VIZIO logo? It's actually a flush-mounting charging station. Users can leave the Crave 360 plugged in, or take the speaker on the go. I believe VIZIO mentioned 8 hours of playback. Design quality and functionality are solid -- the speaker's upper metallic ring is actually a volume control, and its top surface acts like a track pad -- tap to pause or play, swipe to go to the next track.

Lastly, we saw the SmartCast Crave Pro wireless speaker (pictured above this section). This one trades portability for sonics. It's a larger 2.1 system with more base, and meant to stay in one place. It too features Wi-Fi and Bluetooth for SmartCast integration, as well as a smaller version of the volume dial / track pad controls. 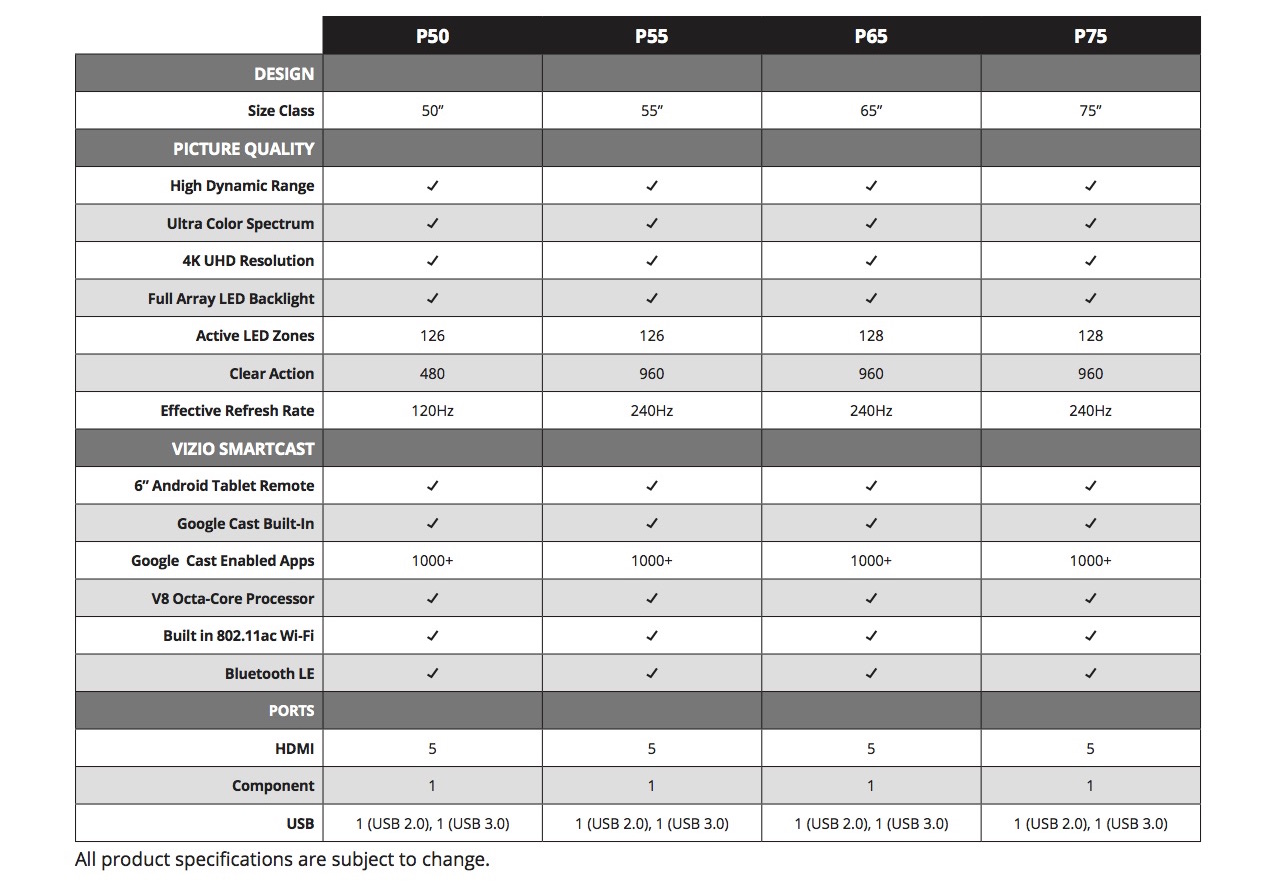 Pricing or availability has not been announced for the SmartCast Crave Pro, Crave 360, or any SmartCast Soundbars. 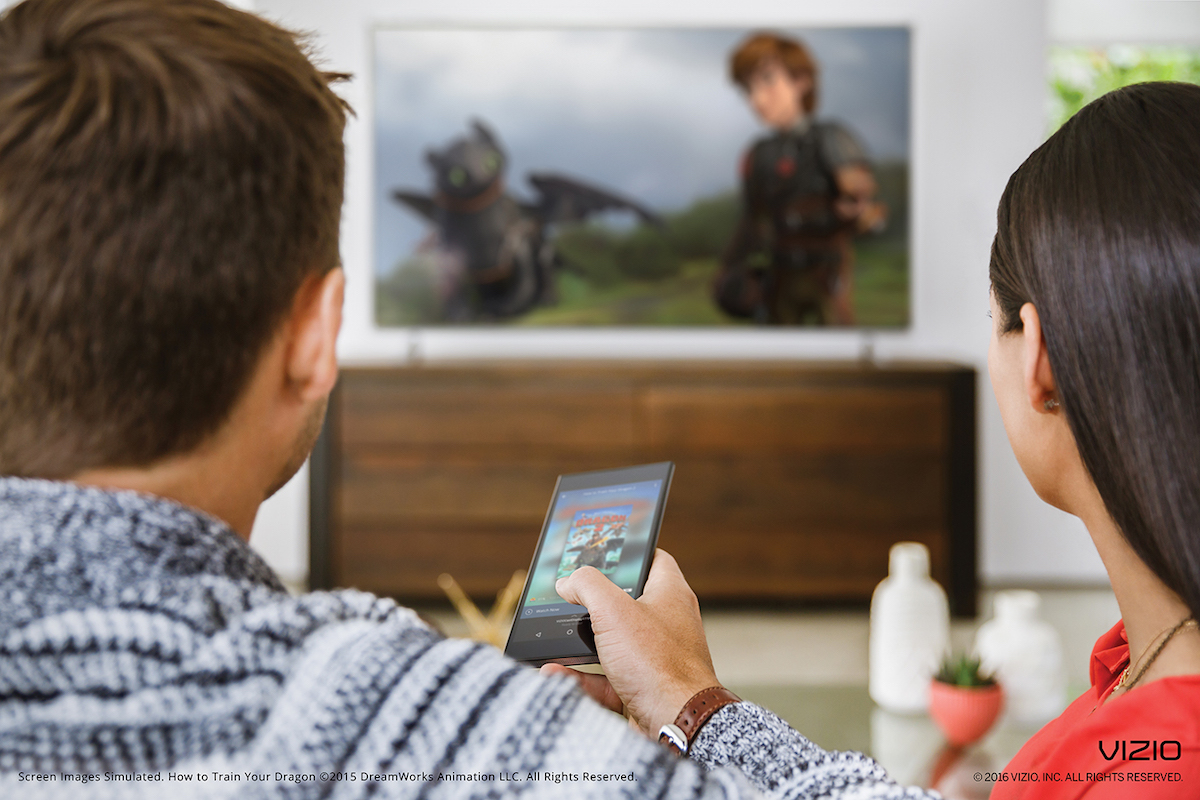 In talking to VIZIO reps last week, they said one of the main reasons they developed the Reference Series displays (the 65" model with costs $6,000) was to trickle down technologies into their more affordable product. With the P-Series you get 90% of the Reference's performance capabilities at one-third the price (when comparing  65" models). And, as far as I'm aware, the Reference Series can't do HDR10 at all, and Dolby Vision is limited to streaming.

The P-Series instantly impresses in terms of picture quality, performance features, and pricing. The SmartCast ecosystem and included-tablet are icing on the UHD cake. I can't wait to test it out in my own home. If you can't afford OLED, and don't mind the lack of 3D support, it's going to be hard to find a better value for UHD with HDR in 2016. 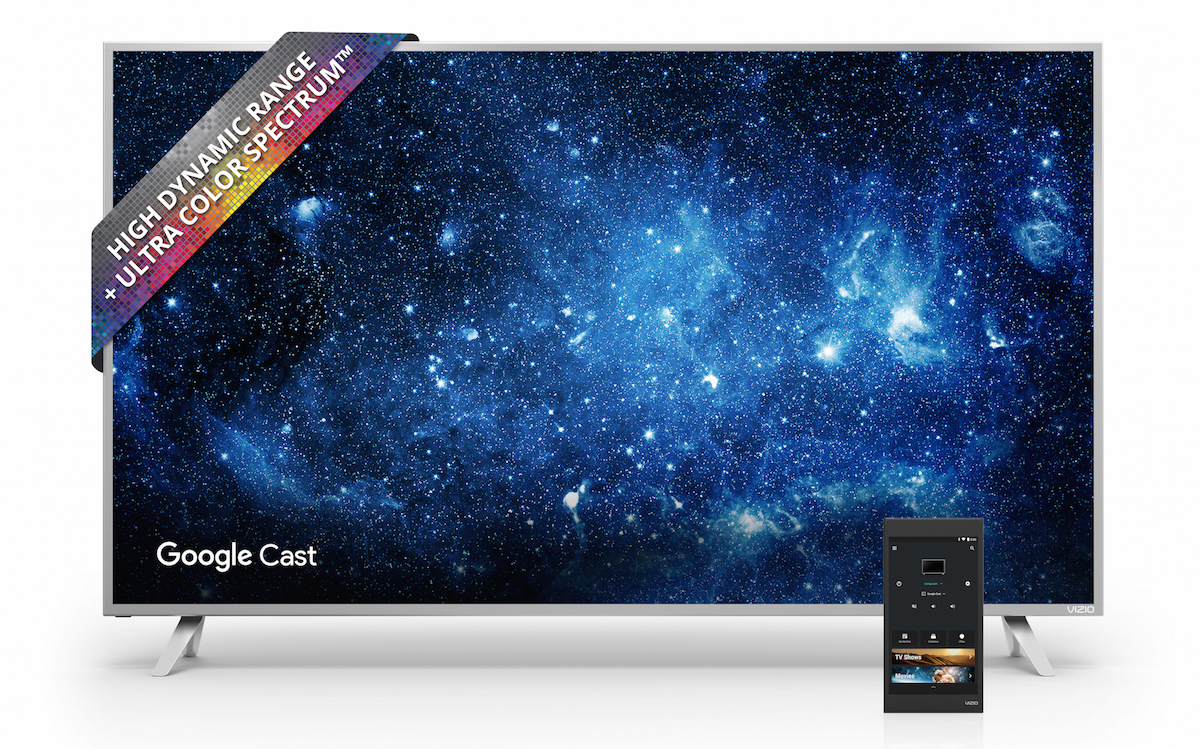