The Menu Announced for Bu-ray on January 17

A young couple (Anya Taylor-Joy and Nicholas Hoult) travels to a coastal island to eat at an exclusive restaurant where the chef (Ralph Fiennes) has prepared a lavish menu, with some shocking surprises. The dark comedy is written by Seth Reiss & Will Tracy, and directed by Mark Mylod.

The Blu-ray will include an in-depth featurette and deleted scenes with a DTS-MA 5.1 soundtrack. 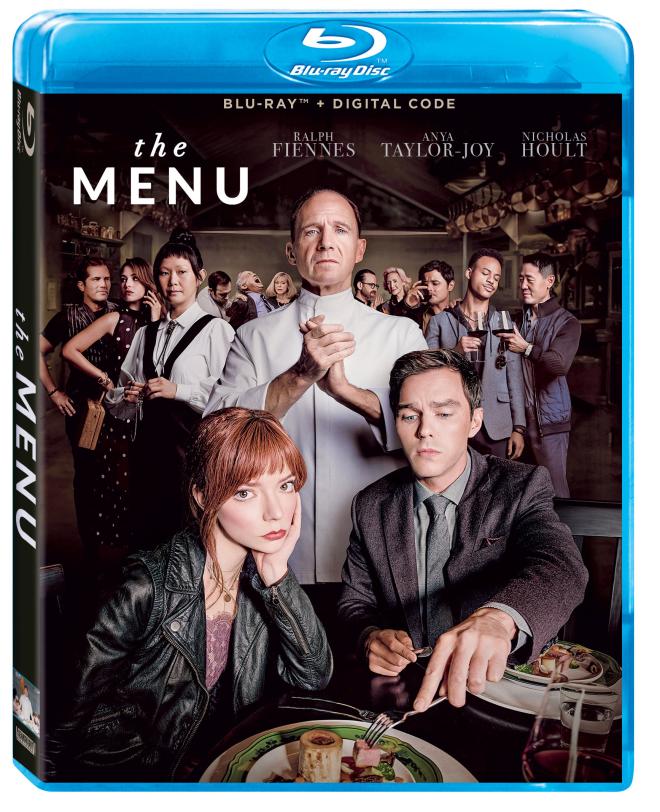 Order your copy today and here is the full press release:

BURBANK, CA (December 15, 2022) – From Searchlight Pictures and director Mark Mylod (Succession) comes the satirical thriller The Menu. This outrageous tale of fine dining has been celebrated by critics as “gloriously twisted” (Chris Evangelista, Slash Film) “wildly entertaining” (Alan Cerny, Vital Thrills) and “undeniably fun” (Brian Tallerico, RogerEbert.com). The film is Certified-Fresh on Rotten Tomatoes™ and arrives on Digital January 3 and Blu-ray and DVD on January 17, with never-before-seen bonus content that takes viewers behinds the scenes and inside the kitchen.

A young couple (Anya Taylor-Joy and Nicholas Hoult) travels to a coastal island to eat at an exclusive restaurant where the chef (Ralph Fiennes) has prepared a lavish menu, with some shocking surprises. The dark comedy is written by Seth Reiss & Will Tracy, and directed by Mark Mylod.

·         Open Kitchen: A Look Inside The Menu - Feast on the special ingredients of The Menu to see how director Mark Mylod and his formidable cast, the biting script and renowned chef consultants concocted the perfect recipe to bring authenticity and dark humor to the film’s high-end culinary world.

o   First Course: Take a seat at the table as director Mark Mylod delves into some of the key ingredients that went into crafting The Menu. Meet the renowned chefs and food stylist who brought their culinary expertise to the set.

o   Second Course: Savor the world-building of Hawthorn, from kitchen “boot camp,” to the meticulous details of the production design. Hear from the cast and writers about the director’s naturalistic approach to capturing the nuances of the performances.

o   Dessert: Dig into the creation of the s’mores sequence as costume designer Amy Westcott explains the painstaking process of sewing ponchos made of actual marshmallows. The cast discusses chocolate hats and the absurd predicament of their characters.

And John Leguizamo as Movie Star

**For strong/disturbing violent content, language throughout and some sexual references

Discs mentioned in this article: (Click for specs and reviews)
The Menu (Blu-ray)