The film has received a new 2K transfer and will be available on Blu-ray in March.

She has the power to set objects afire with just one glance!

Firestarter, based on the unforgettable best-seller by esteemed horror author Stephen King, chronicles the extraordinary life of Charlene "Charlie" McGee. Eight-year-old Drew Barrymore stars as the child who has the amazing ability to start fires with just a glance. Can her psychic power and the love of her father save her from the threatening government agency, "The Shop," which wants to control her… or destroy her? Filled with blazing special effects and featuring an all-star cast including Martin Sheen, Heather Locklear, Art Carney, Louise Fletcher and George C. Scott, Firestarter is directed by Mark L. Lester (Class of 1999, Commando) and driven by a pulsating, thrilling score from Tangerine Dream (Legend, Sorcerer, Risky Business).

You can find the latest specs for 'Firestarter: Collector's Edition' linked from our Blu-ray Release Schedule, where it's indexed under March 14. 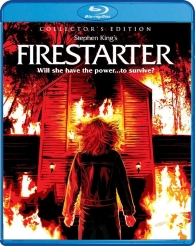