The long lost 1974 horror flick will be making its way to high-definition in May.

In an early announcement to retailers, Mondo Macabro is preparing 'Symptoms' for Blu-ray on May 10. A Limited Edition version is also available for pre-order exclusively through the Mondo Macabro Store.

For years only viewable as a blurry bootleg derived from an early 80s British TV broadcast, this haunting thriller can now be seen as it was intended with a brand new HD transfer of the recently discovered negatives. It's taken us more than 15 years of searching and negotiating to get here, but with the indispensable assistance of the BFI Mondo Macabro can finally bring this film to the world on Blu-ray and DVD.

Symptoms is an intense and claustrophobic study of a woman's descent into madness and murder. Made in the same years as Larraz's better known Vampyres with much of the same crew and a similar vibe, Symptoms is more atmospheric and ambiguous, and less exploitative. But it casts a powerful spell and is perhaps the most potent example of director Jose Larraz's unique style.

Starring Angela Pleasance (From Beyond the Grave) in what is probably her best ever role, Symptoms is a film whose time has finally come. After premiering at the 1974 Cannes Film Festival as the official UK entry and a brief theatrical run, the film sank into almost complete obscurity until being rescued from oblivion by books like Tohill and Tombs' Immoral Tales and the ever-diligent video underground. With this stunning new Blu ray release Symptoms can now be seen as the masterpiece of 70s horror that it truly is.

Specs have not been detailed yet, but the Blu-ray will include the 2011 documentary on Jose Larraz, ON VAMPYRES AND OTHER SYMPTOMS; FROM BARCELONA to TUNBRIDGE WELLS, a 1999 TV documentary on Larraz, part of the EUROTIKA! series; and New interviews with stars Angela Pleasence and Lorna Heilbron and editor Brian Smedley-Aston.

You can find the latest specs for 'Symptoms' linked from our Blu-ray Release Schedule, where it's indexed under May 10. 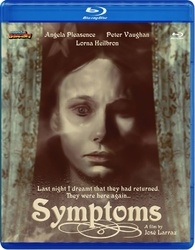