Yes, it's that time of year again. The time to bask in the glittering glow of all the latest and greatest premium tech products at the Luxury Technology show.

Held at the Metropolitan Pavilion in New York City, the event spotlighted high-end electronics, gadgets, and other decidedly expensive toys from a variety of brands like Sony, LG, Tidal Force, Meridian, THIEL, and more, showcasing all of the newest innovations in indulgent tech, ranging from virtual reality headsets and OLED Ultra HD TVs to integrated home theater solutions and $6,000 headphones.

But while our focus remains on AV gear, no Luxury Tech Show could be complete without -- yep, you guessed it -- a brand new car! 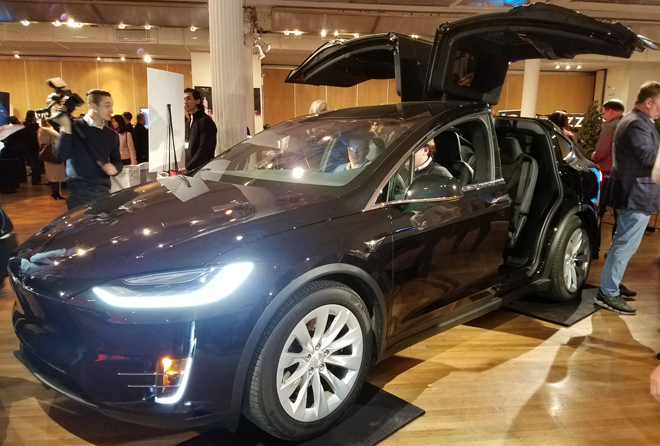 Fancy $86,000 Teslas aside, here's a rundown of some of the show's top consumer electronics and product demos!

Bringing together some of the industry's hottest current tech trends, this cool virtual reality demo put together by Wired Magazine featured a PS4 VR headset (full review here!) with a pair of MrSpeakers headphones (more on those below) and a 2016 LG OLED Ultra HD TV (full review here!). Though I later saw some attendees playing a fully controllable racing game, the experience I sampled featured an eyes-on only descent into the ocean's depths while in a shark cage. 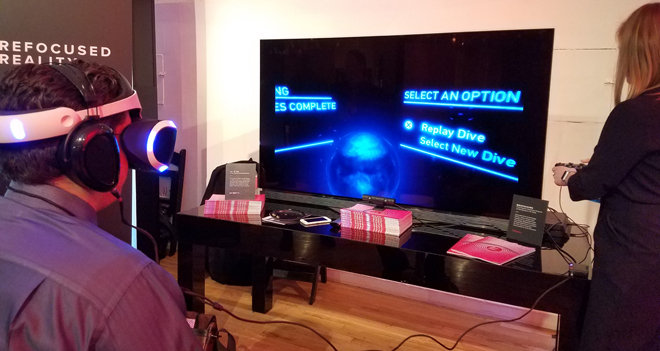 There was no actual hands-on interaction, but the Ocean Descent demo (included as part of the PlayStation VR Worlds disc) allowed users to look around in all directions with the headset, creating an impressively immersive experience as various schools of fish and other spectacular sea life filled the screen. All the while, the LG OLED mirrored my VR view, giving spectators a front row seat to my near demise at the hands (or rather teeth) of a great white shark.

Compared to other VR headsets I've demoed (HTC Vive, Samsung Gear VR, Google Daydream View), the PS4 VR headset holds its on very well with solid specs and a convincing sense of immersion -- even if there are some quirks with long-term use. The PlayStation VR is currently available for $400. Meanwhile LG's 2016 OLED lineup currently starts at $1,997, and the company's new 2017 OLED collection is hitting stores now with prices starting at $3,499.

When it comes to headphones, the buzzword at the show was definitely planar magnetic -- with a trio of companies all showing off their own models, including MrSpeakers, HIFIMAN, and Tidal Force. Serving as a kind of crossbreed between traditional dynamic drivers and high-end electrostatic drivers, planar magnetic drivers offer less distortion while producing very spacious sound. And unlike premium electrostatic drivers, planar magnetics typically do not require additional external power and amplification -- though an amp will still yield the best performance. 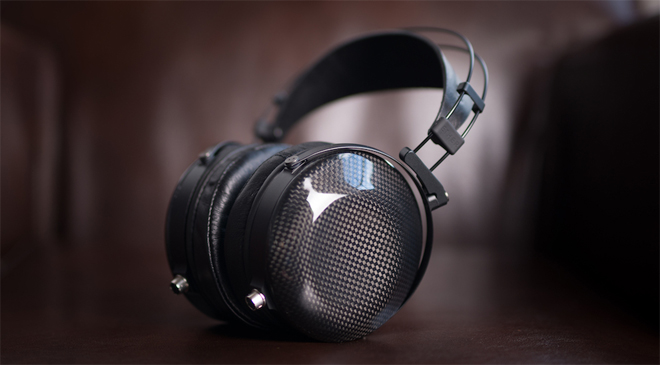 Included as part of the VR demo above and highlighted separately at their own booth, MrSpeakers brought a few of its premium, light-weight planar magnetic headphones, including the ETHER Flow ($1,800 -$1,850), ETHER C Flow ($1,800 -$1,850), ETHER C ($1,500 -$1,550), and upcoming entry-level Aeon ($700, April release). The flagship Flow models use the company's V-Planar driver with TrueFlow tech, Ultralight NiTinol metal headbands, and Italian NAPPA lamb leather ear pads and head straps, resulting in a very attractive, light-weight, comfortable, and surprisingly sturdy design. Seriously, the rep was able to bend, twist, and contort the metal band before my eyes without any signs of breakage. For my demo, I sampled some high-res Daft Punk tracks on the ETHER C Flow and the Aeon -- and though the noisy show environment was not ideal for listening, the benefits of the planar magnetic drivers were immediately apparent, creating a pleasingly dimensional and vivid sound. 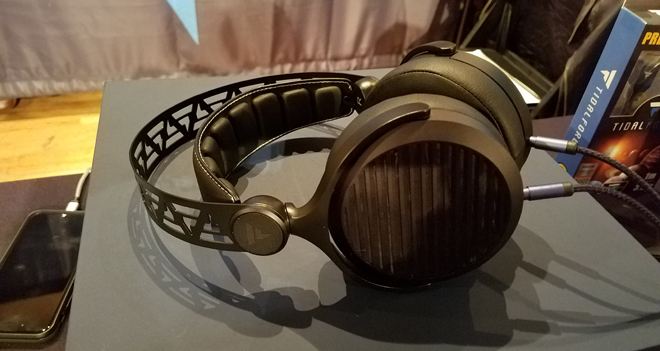 Marking the company's entry into the high performance AV market, Tidal Force brought its upcoming, comparatively budget friendly Wave 5 planar magnetic headphones ($299). The open-backed headphones feature 560 mm Planar Diaphragms, an all metal construction, and extreme comfort ear pads. For my quick demo, I listened to a high-res Queen track and a lower bitrate file of Hotel California -- and even with the lower quality track, the headphones produced an enveloping sound, especially at this price range. The Wave 5 headphones are now available for pre-order and are set for an April release. 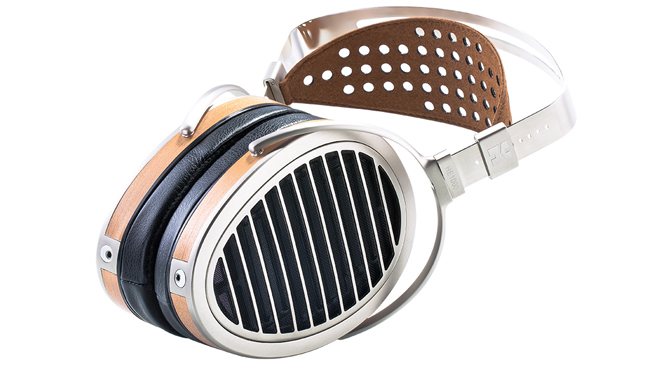 Finally, HIFIMAN brought its particularly luxurious HE1000 V2 ($3,000) which boasts the world's first diaphragm in nanometer thickness. Though I can't say I'm totally sold on the model's design aesthetic, the sound quality speaks for itself -- and once it starts you won't want it to shut up. Even on the loud show floor, the headphones created an extremely smooth, textured, and intimate sound with some high-res jazz tracks that I sampled. Likewise, I also tested the company's new top-of-the-line SUSVARA prototype headphone model set for release in the second quarter for $6,000. And while I can't quite confirm whether the sonics justify that hefty price tag, based on my limited listen... I certainly do wish I had an extra $6,000 lying around.

Of course, planar magnetic headphones didn't get to have all the fun at the show, as Echobox brought its collection of audiophile geared earphones as well, including the Traveler T1 ($99), the Finder X1 ($229), and the Nomad N1 ($399). The lineup features the company's PEEK (Polyether Ether Ketone) drivers and sturdy all-titanium shells, resulting in attractive designs and quite pleasing sonics. After being fitted with some comfy Comply tips, I got to listen to a few high-res Bob Marley tracks on all three models. And though the Nomad had a fuller presence, considering its price to performance ratio, I actually found the Traveler to be the most impressive of the bunch, offering rather strong quality for $99 earphones. 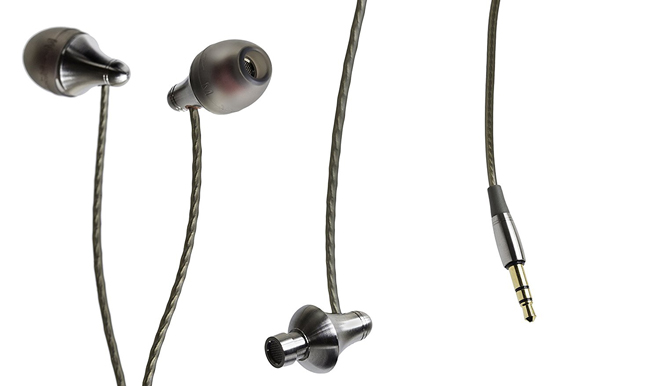 And in addition to its earphones, the company also sells its own high-res digital audio player, the Explorer ($599). Crafted from genuine hardwood available in Mahogany, Maple, Zebra Wood, and Ebony finishes, the Android powered DAP features a handsome aesthetic along with a 3.5 inch 720p LCD display, 64GB of internal memory, Wi-Fi, Bluetooth, and a 4,000 MAH Lithium-Ion battery.

Outside of headphones, the show was also home to some cool new lifestyle multi-room speakers, including textile clothed models from Danish company Vifa and customizable units from Nashville based company THIEL. 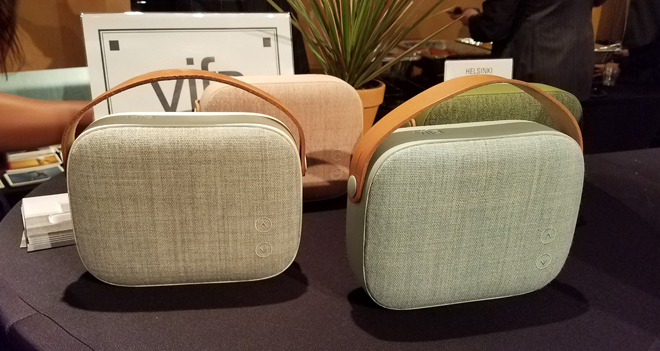 Marked by distinct Nordic design, Vifa's lineup aims to deliver high quality sound with a simple yet premium aesthetic, allowing its multi-room speakers to serve as home decoration pieces in addition to audio devices. This unique look is punctuated by the units' use of high-quality wool fabric covering. The collection includes the company's Stockholm home theater soundbar ($1,199), along with the Copenhagen ($800), Oslo ($549), and Helsinki ($379) portable wireless speakers. The two more expensive models include both Wi-Fi and Bluetooth connectivity, while the two cheaper models only include Bluetooth. Sadly, while they certainly looked rather lovely, it was pretty much impossible to hear them in any substantial way during the noisy show. 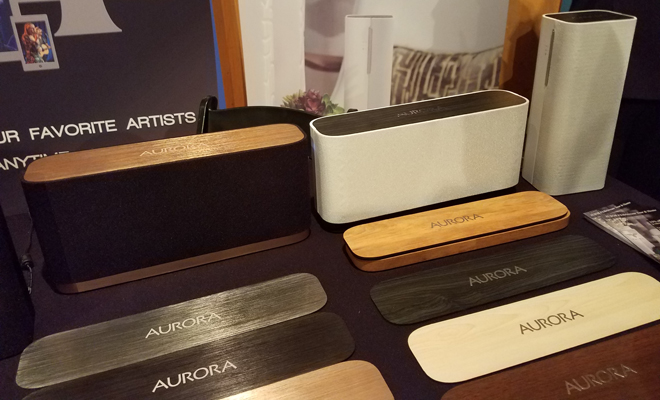 With its new Aurora Lifestream Home ($900) and battery-powered Lifestream Tour ($600) speakers, THIEL is entering the wireless, multi-room audio market with a customizable design twist. The speakers both feature sections that are interchangeable with a line of accessories in different finishes, allowing the consumer to match the product's look with the décor of their room. In addition, both models include DTS Play-Fi connectivity, Apple Airplay, Bluetooth, 3.5mm AUX inputs, and upcoming support for Amazon Alexa. And beyond wireless models, THIEL also had its traditional wired 40.1 Reference bookshelf speakers on display as well with a 1 inch Titanium Dome Tweeter and 6.5 inch Glass Fiber Cone Woofer.

Finally, no Luxury Tech Show would be worth its name without a look at a fancy, all-encompassing integrated home theater system. To show off what a high-end connected room could look like, ACS and Crestron were on hand with a living room setup complete with an LG OLED Ultra HD TV, Meridian 5200.2 Loudspeakers, and a Crestron TS-1542 touchpad, all running with music streaming and high quality digital 4K Ultra HD HDR movie playback through Kaleidescape.

While it was hard to hear some of the other smaller speakers during the show, the Meridian 5200.2s were a completely different story. Despite the noisy environment, the beefy towers still managed to rock the room, offering rather striking clarity and presence considering the circumstances. Likewise, the LG Signature OLED display ($5,997) looked magnificent, with beautifully inky blacks while playing an HDR copy of Elysium. And since every playback device and source was integrated via ACS and Crestron solutions, this tiny corner of the show floor really was a home theater fan's paradise -- minus a complete Dolby Atmos and DTS:X system, of course. 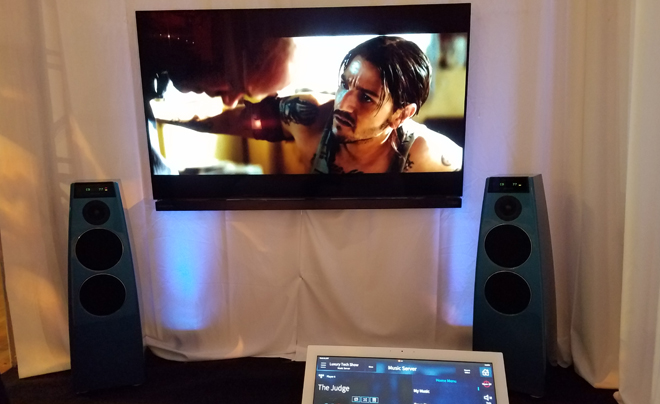 As I bid adieu to Matt Damon's shiny bald head (even shinier in HDR), my time at the Spring 2017 Luxury Tech Show came to a close, forcing me to once again leave all of the glitz, glamour, fancy tech, and swanky celebrities behind (apparently I somehow missed meeting John Oliver!).

For now, though, what do you think about the show's luxurious gear? Could these high-end products really be worth their equally high-end price tags? Will you be saving up for any of the items on display? Let us know your thoughts in the forum!