The double feature will be available in stores at the end of September.

In an early announcement to retailers, Severin and Intervision Picture Corp. is working on 'Lady Libertine / Love Circles' for Blu-ray on September 27.

Specs have yet to be revealed, but supplements will include: Interview with director Gérard Kikoïne (French with English subs) and Gérard Kikoïne introducing Lady Libertine at the Fantasia Film Festival.

You can find the latest specs for 'Lady Libertine / Love Circles' linked from our Blu-ray Release Schedule, where it is indexed under September 27. 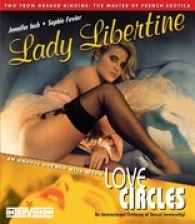