Another studio has pledged support for the new HDR format.

Though exact titles and platform specifics have not been detailed yet, Warner Bros. has announced plans to start offering HDR10+ content. In addition, updates to the format's associated certification and logo program have also been detailed, allowing more manufacturers and content creators to begin implementing the tech into their titles and products.

"Warner Bros. has always strived to provide the best next gen home entertainment experience to consumers," said Jim Wuthrich, President of the Americas and Global Strategy, Warner Bros. Home Entertainment. "With HDR10+ dynamic metadata, WB can continue to more accurately bring the filmmakers' vision of our 2018 releases and our vast catalog of over seventy-five 4K HDR titles to the home across a broad range of HDR10+ capable TV’s."

Currently, the standard HDR10 format uses static metadata that does not change during playback, offering a fixed picture enhancement across an entire piece of content. This can lead to inconsistent HDR quality in certain scenes, especially if a movie has an overall bright color palette mixed in with a few dimly lit sequences. But with HDR10+, the format is now introducing dynamic metadata which will allow a compatible display to adjust brightness levels, color saturation, and contrast, on a scene-by-scene or even frame-by-frame basis, producing images that are closer to the director's intent. Likewise, this upgrade makes the new HDR10+ standard more in line with the competing Dolby Vision HDR process, which already incorporates dynamic metadata along with higher specs for max color and brightness performance compared to HDR10. 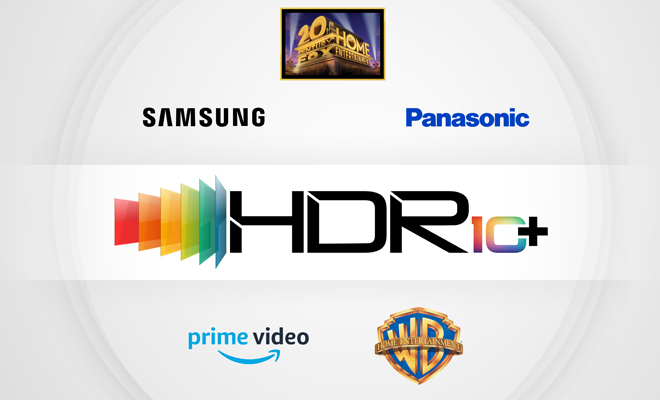 "It was important for us to create an open system that is flexible and offers a viewing experience much closer to the filmmaker’s creative intent for the film," said Danny Kaye, Executive Vice President of 20th Century Fox, and Managing Director of the Fox Innovation Lab. "Together with Samsung and Panasonic, we aim to standardize the licensing process making it easy for partners, including content creators, television and device manufacturers, to incorporate this technology and improve the viewing experience for all audiences."

As part of the new license program, manufacturers and content creators will gain access to the technical and testing specifications needed to properly implement HDR10+ technology into various Ultra HD TVs, Blu-ray disc players/recorders, set-top boxes, and SoCs. In addition, the associated certification program will then ensure that products that earn the HDR10+ logo meet the format's standards for picture quality. Beyond the newly announced support from Warner Bros., HDR10+ is also supported by 20th Century Fox, Samsung, and Panasonic. Likewise, Amazon Prime Video is already streaming a growing collection of HDR10+ titles through 2017 Samsung QLED and UHD TVs.

"Samsung is committed to technological innovation across our TVs and HDR10+ represents an evolution in display quality for the best possible viewing experience," said Jongsuk Chu, Senior Vice President of Visual Display Business at Samsung Electronics. "We have also designed the HDR10+ platform to encourage future development in order to deliver further enhanced technology in the years to come."