Bungie Explains How to Raise the Attack of Defense of Current Exotics, Also Introduces Radiant Shards

Earlier this week, Bungie finally reworked the current state of 'Destiny's Exotic weapons. (check out how here) Now, it seems, the real changes are about to begin. Current Exotic weapons and armor are going to be a class below the new Exotics due in the Expansion pack, but there is a method to upgrading them.

In essence, players will need to take their current Exotic gear to Xur along with an exotic shard. On a weekly rotating basis (like all of Xur's stuff) the Exotic gear upgrades will available to purchase for an Exotic Shard plus 7000 glimmer. Unfortunately, once purchased, the Exotic gear's leveling progress will be reset. 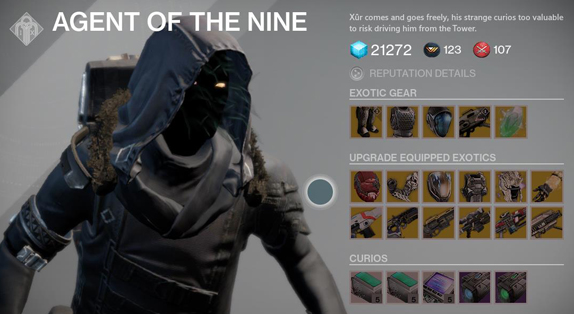 Meanwhile all Legendary gear on sale now will be replaced by higher level gear. Unfortunately, to purchase this gear, players will need a new currency, Commendations. There will be both Crucible and Vanguard Commendations, and these are earned whenever a player reaches a new level of reputation with the respective vendors.

Finally, it seems that even Raid Gear is going to require new methodology. While Bungie says that more Raid gear will drop in Crota' End (which requires level 30 to attempt), that Gear will require new Radiant shards to upgrade. Radiant Shards can be obtained from breaking down unwanted Raid gear. Bungie has also noted that Raid set primary weapons will "only drop in the harder version of Crota's End," which is coming in January.

Existing Legendary gear on display in the Tower will be replaced

This new, more powerful gear will be available to all players of Destiny

As part of the December 1st Destiny Update, Exotic Armor and Weapons no longer require Ascendant Materials for upgrades

This new material is obtained by one of the following means:

Purchased from Xûr for 7 Strange Coins

Exotic Gear in The Dark Below will have higher Attack and Defense values than current Exotic Gear. For players and their current caches of Exotics, a path will exist to bring them forward into The Dark Below.

Starting December 9th, Xûr will offer players the opportunity to upgrade Exotics to the higher Attack and Defense values

Upgrading an Exotic in this way will require an Exotic Shard

The upgrade will reset the progression invested into the item

Each week, Xûr will possess a selection of upgrades for existing Exotics in his inventory

Expansion I will include two new exclusive competitive playlists

New Crucible arenas (Pantheon, Skyshock, and The Cauldron) will be featured in map rotation

Playlists available in the Director will change week over week

Experiences will alternate between 12 and 6 player engagements

The new Raid, Crota's End, will unlock on December 9th

The reward system in Crota's End will address some issues reported in the Vault of Glass:

Raid loot in Crota's End will drop at a higher rate

Primary weapons will only drop in the harder version of Crota's End, released sometime in January