No Time for Losers: 12 Classic Tracks Make Their Return in 'Guitar Hero Live'

'Guitar Hero Live' is coming and coming soon. The star of the gameplay is the new guitar and charts, but visually it's either the live-action Live part or the amazing GH TV content delivery side (see here). But of course, it's the tracks that get people buzzing while they wait for the game. Activision is so excited about the tracklist that they have put together a special Spotify Playlist (which can be found here, be sure to use the app.)

As the game draws close, 12 tracks of classic rock and alternative renown have just today been announced. These tracks have been featured in the series before (and with good reason), but now will have the new track design. (The 3x2, six button guitar is a game-changer, so getting these great tracks in the new game makes sense.)

Not all of these tracks are equally timeless. (I only like Round and Round because I someone who really hates for example, which makes it hilarious to me.) But as part of a package, these is a choice subset.

Here are the newly announced tracks: 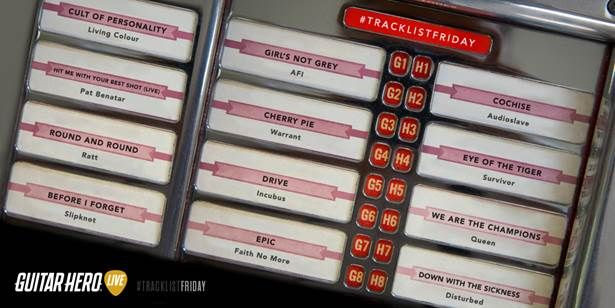