Stars in My Eyes: 'Guitar Hero Live' Feels Like Something Fun & New

Full disclosure: Rhythm games have never been my favorite. The heyday of 'Guitar Hero' and Rock Band' amassed a massive fan base of hard and casual players, who in turn amassed lots of instruments and DLC songs until it all came apart. While I could never fully embrace the genre, the shame of the collapse seemed to be that the even with all the different releases and spinoff, the basic gameplay formula and DLC model never evolved. By basic gameplay, I mean the tracks.

Ever since I went from using three buttons to five buttons, nothing ever felt all that new or different. Sure, different instruments had their significance, but for this so-so player, the gameplay felt all-too rooted in the PS2 era.

Fast-forward to 2015 and FreeStyleGames introduces the return of Activision's once iconic 'Guitar Hero' franchise in the form of 'Guitar Hero Live.' At first take, 'GHLive' is missing something close to my heart, rendered venues. Instead, the Live side of the game puts the player in a live action, musical festival, stage performance. This Live mode, which is built using all of the game's on-disc songs, is a bit smarter than I had thought. 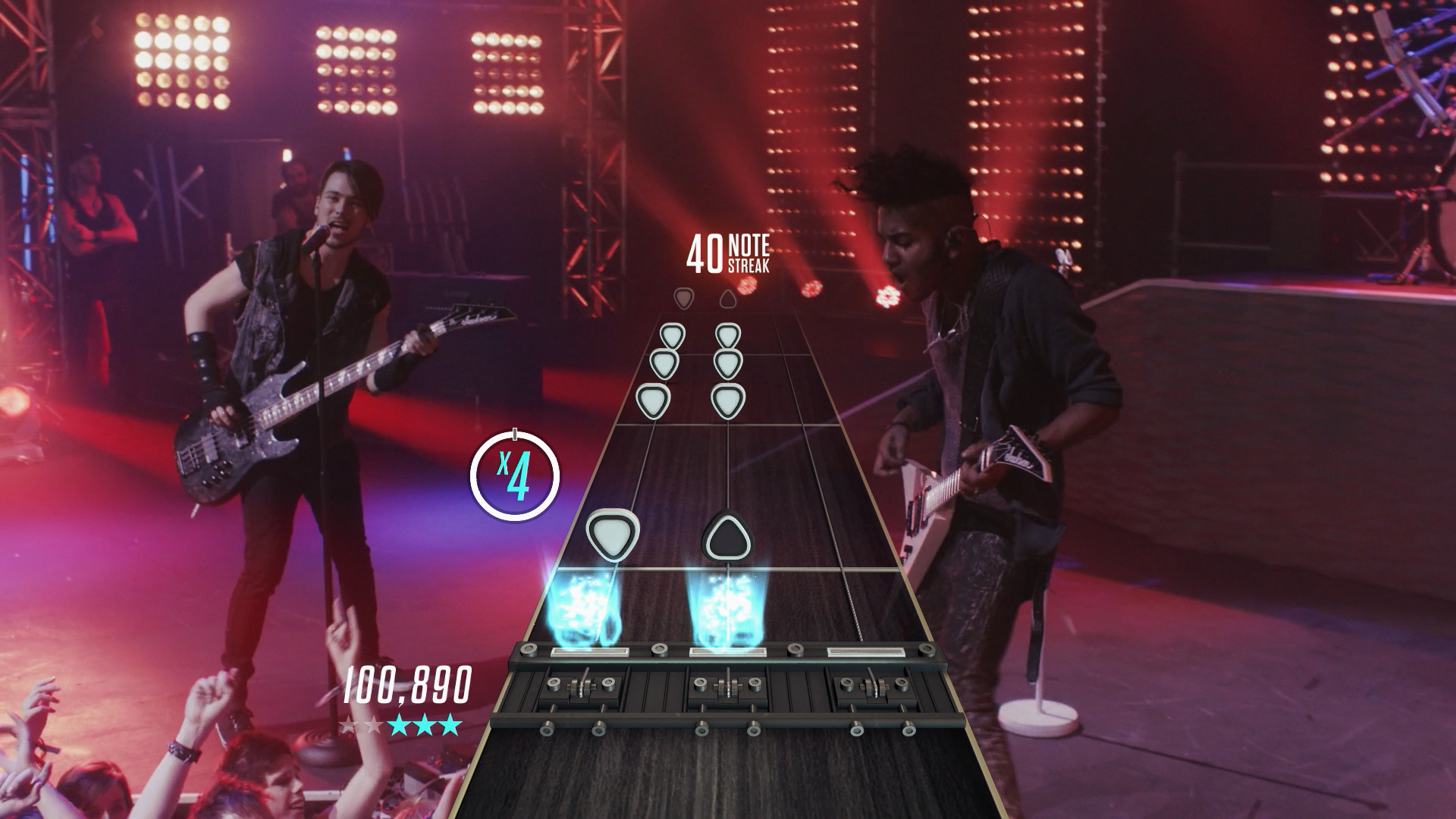 The idea is to get the player into a new take on the rock star role, and the festival setting means a raucous crowd, one that's ready to go from one extreme of emotion to another and back again at a moment's notice. After my first hands-on experience, playing the Live mode and watching the crowd and my bandmates react to my terrible play song after song was pretty funny. Staring at the drummer whose shrugging and staring daggers back, or looking into the stage pit at frazzled fans in an aura of disappointment is a definite kind of in-game pressure that feels new, especially because there is no failing and there is no practice mode. The only choice is to try and play better.

But like the arcade mode of a fighting game or the campaign mode of a FPS shooter, I get the sense that the Live part of the game is where the basics are taught, and where the story is structured. No doubt the developers want players to enjoy the different looks (different venues, fans, and band members) tracks, and so on. During tracks where the guitar goes quiet, the track disappears, and the background is completely visible. The different difficulty levels and the relative challenge of different tracks have their classic replay value intact. Plus, the game has an experience system, with unlockable perks (like an extra streak miss), or different cosmetic bits of flair like zany looking tracks and player cards.

One thing I really liked about the Live mode is the positional audio. They've got different venues and bands to experience, and the fun of having a player view that moves around that stage plays out through the audio. This dynamic out to be great fun for the surround sound set-up.

Now one reason I think the Live part of 'GHLive' is such an area to learn is that with the new controller, I finally feel the guitar experience has stepped up from the days of the PS2. 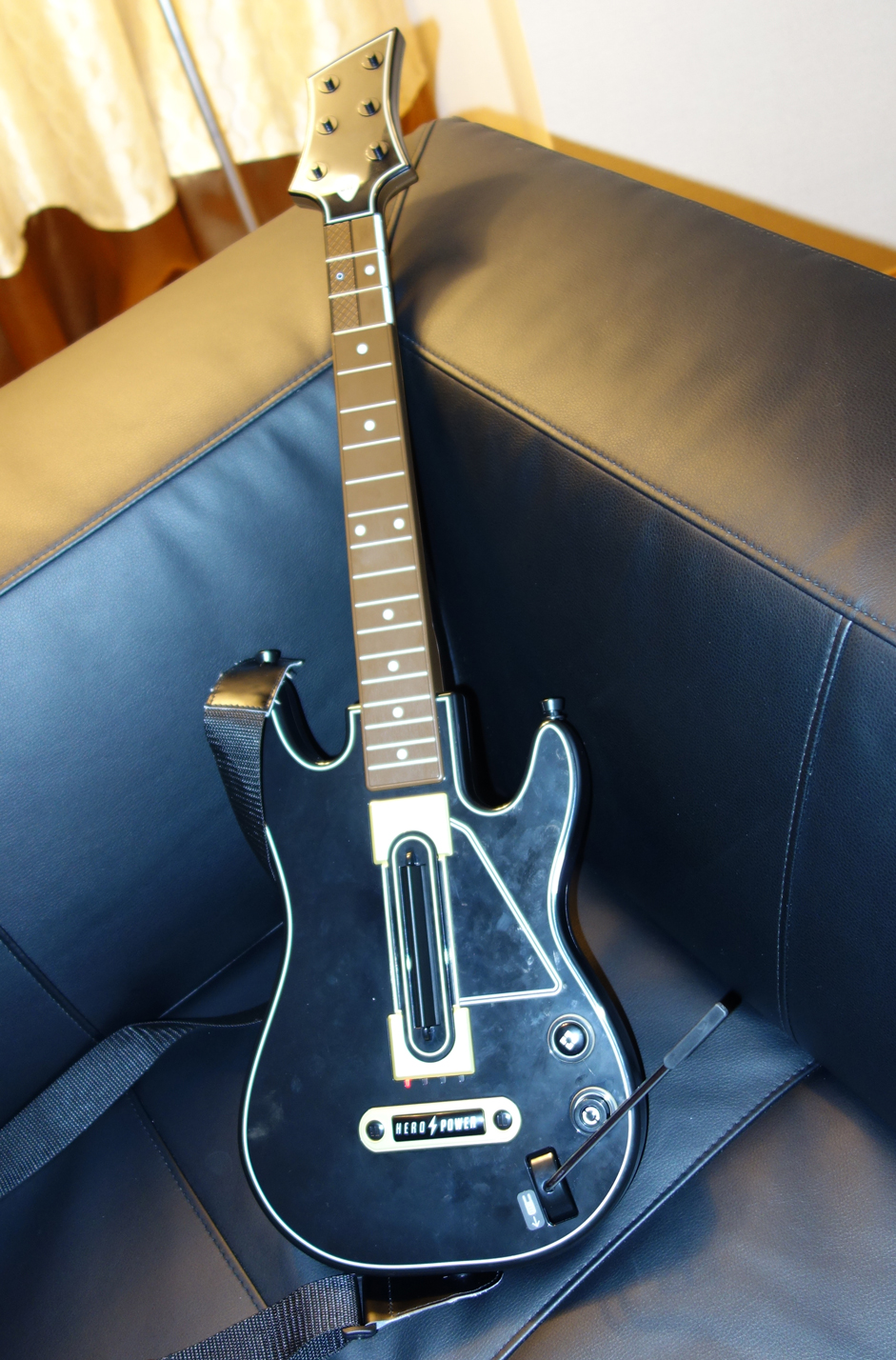 What I mean is that the two row, six button neck design feels different. Stepping into the higher difficulties, and my fingers are compelled to do things they've never done before (my stupid fingers have never done more than a chord or two on a real guitar). This is a challenge for sure, but it's one that I find fun, the kind of thing I want to really learn how to do.

Seems like every day, a new music streaming service is being launched by a major player, but I can't recall ever caring too much about a specific one until now. Simply put, I think 'GHTV' is pretty brilliant. It gives players access to a ton of music without a massive hit to the wallet or the hard drive. I'm still not as sure about the use of music videos, but I have seen where FreeStyleGames wants to do something a bit more exciting in the form of actual concerts in the GHTV Premium section. Back to the GHTV, it lets everyone with the game have access to channels worth of music. It's always running, so it's just a matter of flipping to a station and jumping in. (I flipped on Kings of Leon right when the song was ending for example.) Each song has scores listed on the left, put there using the friend's list and comparative skill matching. Because the songs are programmed in this TV format, it means that I, my friends, and everyone else are being pointed to the same songs at a given moment. The channels, different programs, and easy server side updates should mean that there's always new stuff to peruse. 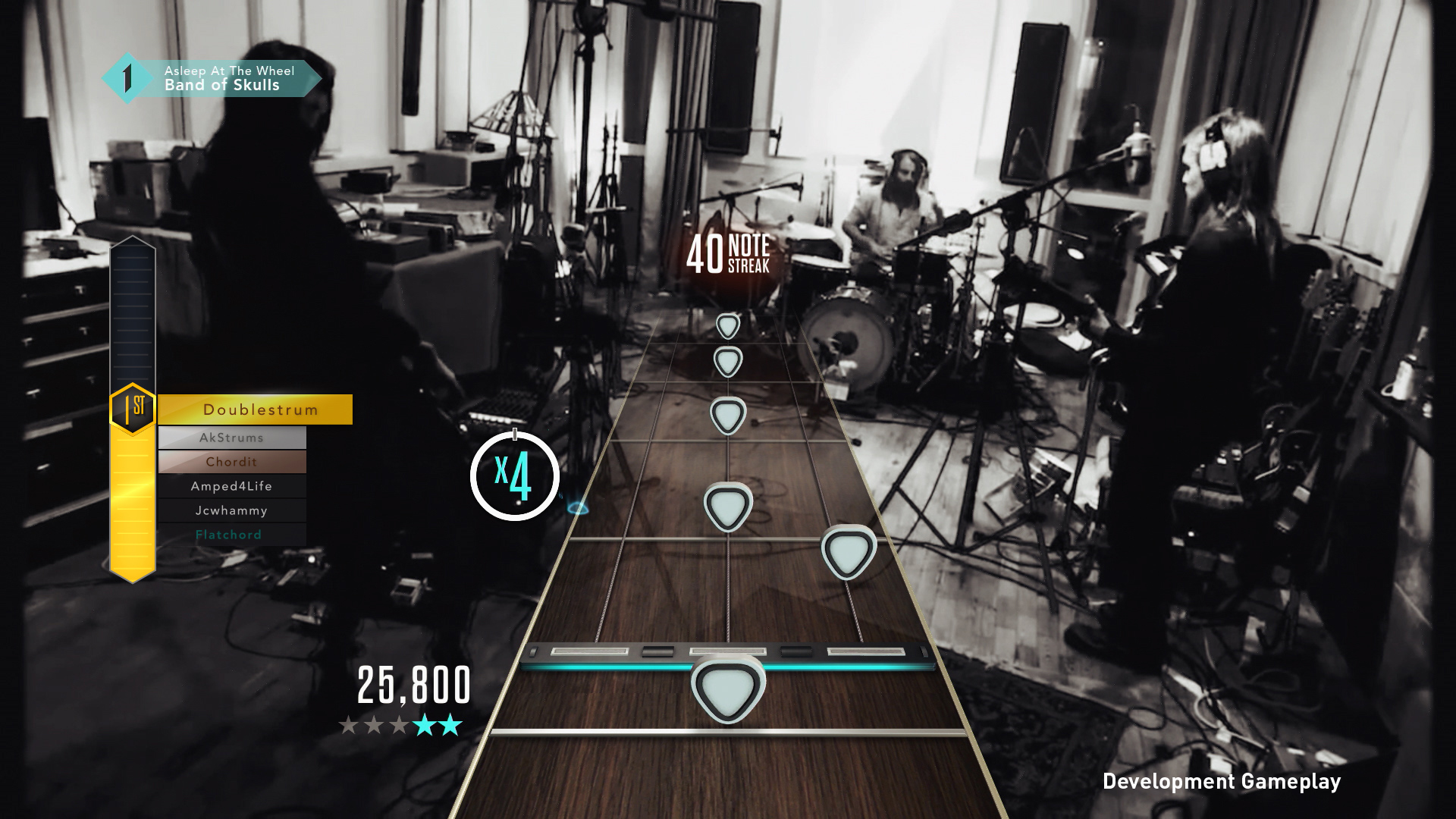 All of these songs can still be accessed outside of their program/channel window, but there is a catch. In-game credits, earned whenever the player is playing anything, must be used to access these songs outside of the channel format, (aka anytime plays). The idea of a jukebox where one coin means one play of a given song was expressed. In theory at least, regular play should net users a lot of these coins to use, but if they just want to own a specific song from GHTV and not worry about using coins, that's where the real money comes in.

This kind of DLC model has promise since all of the GHTV songs can be played for free, but I can understand that more traditional players (like myself) will want to just buy the songs they want. For those users, they can still use the in-game coins in a try before you buy kind of way.

Likewise, for those times when players want to have a GH gathering at their house, Activision is thinking about some kind of pass that gives players timed unlimited access to all of GHTV's songs. This Netflix style approach at the very least spares users the need to worry about hard drive space.

There are still some big question marks about the game, but they are more promising than scary. The premium GHTV content could be a real boon for fans of specific bands, who want to really get into their shows. The scored competition, which works when different players are playing at the same time, and also using a ghost style scoring system, will be available to players right away, but an unlockable (using XP) Rivals mode should get that versus vibe going. The ability to unlock and choose different perks brings a different sense of progress to the game as well as some scoring strategy, but it remains to be seen how drastic the effect will be on scoring and the leaderboards. 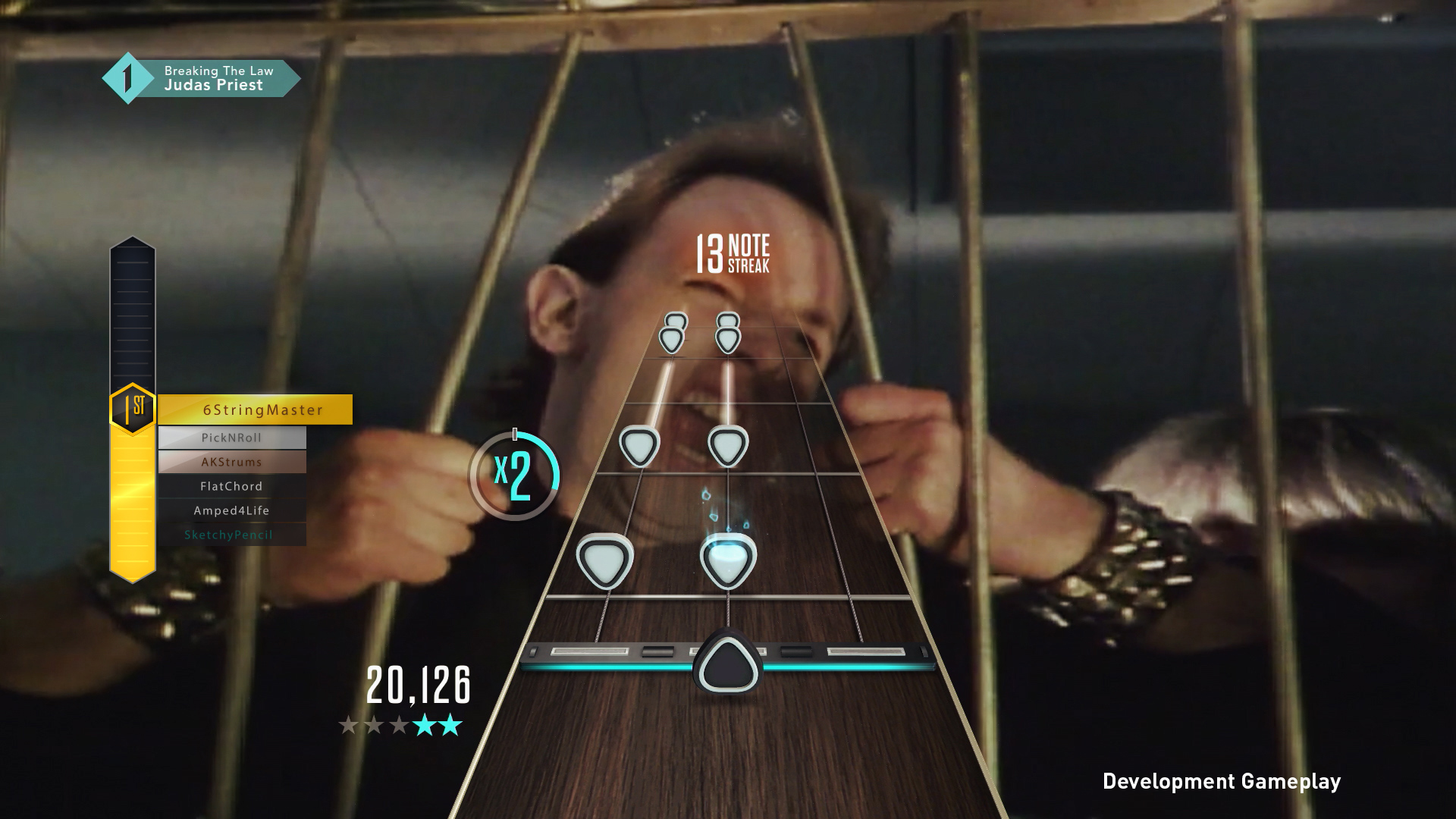 Plus, it's very clear that the developers are keen on learning their users' music tastes, and adding more music to fit those varied tastes, even to the point of less known groups finding a new fan base. Still, the idea of catering to users' taste and tendancies often works better in concept than in practice. Fortunately, if I set the promising GHTV aside for a moment, the compelling new controller and track design is powerful enough to warrant a serious look for both former and would-be rhythm game fans (And on a plethora of platforms to boot.) By making the guitar rhythm game feel new again, all of the unlocking is poised to be nearly pure bonus.