After yesterday's Pachter proclamation that there would be no price cut for the Xbox One or PS4 and in fact that the Xbox One would ascend back in price to $399, Microsoft has come forward to announce that not only will there be a new 1TB standard Xbox One model, but that the $349 price is now permanent for the old 500GB models. This announcement comes one week before the start of E3, and this new Xbox One offering is set to debut on June 16th, the first day of E3 proper.

In addition to the 1TB internal hard drive size and price of $399, the new Xbox One features a matte finish, comes bundled with the 'Halo: The Master Chief Collection,' and most notable of all, the new Xbox One controller. (There's a new headset with inline controls as well).

As rumored, the new controller features a 3.5mm jack standard (as well as the old accessory jack). New options to control volume, and even offer mic-monitoring/side tone will be added to the OS, and a new headset with inline controls, that looks a lot like the later 360 one, is part of the new console bundle. The new controller also features retuned bumpers (to eliminate the dead zones) and can be updated wirelessly.

This of course is not the first time the Xbox One is being offered with 1TB, (the 'Call of Duty: Advacned Warfare' Xbox One is 1TB), and all Xbox Ones support external storage via USB 3.0

The new controller will also be offered on its own for $64.99 in black and in a new camouflage design. This camouflage version is the silver and black Xbox One Special Edition Covert Forces Wireless Controller. 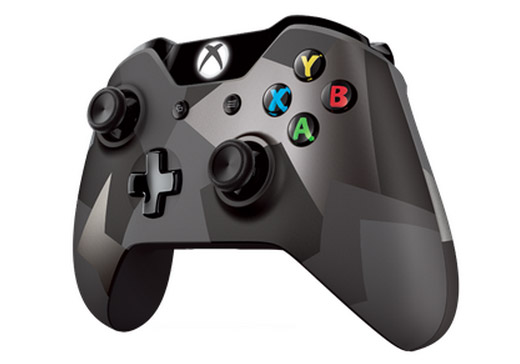