And that's just the beginning.

Last week, I showed just how in-depth and varied, but still user-friendly is the custom Skylander part of 'Skylanders Imaginators' (see me create a character here). But those of us who have been following the game for the past several months have already begun to take for granted that the game will let players make their own virtual and personal Skylander. The question then has been, with so many fans and families crafting their own playable figures, shouldn't there be a way to share and perhaps even showcase these creations?

And now, the other shoe drops. While the game has an excellent capture mode, Activision has taken the Imaginators all the way to one possible ultimate form. A 3D printed, full color, playable figure.

That's right. A custom Skylander, made either in the console game, or in the new 'Skylanders Creator' app (iOS and Android), can become a playable 3D printed Imaginator figure. (The figure is enclosed in a clear protective dome.) It can also become an Imaginator t-shirt, or in a more subdued form, a playable Imaginator Card.

And as already illustrated by Toys For Bob, this means that fans that want something like say, a Halloween version of their Imaginator on t-shirt, can get it. (And based off the samples I've seen, every holiday if desired, even something like Donut day.) These on-demand custom products cost money, but there is another more thrifty (and digital) aspect. Skylanders in the 'Skylanders Creator' app can be shared by way of social networks. Basically, whatever popular social apps are on the iOS or Android device ought to work. Using the app to share Imaginators allows the playerbase to remain offline with their consoles if need be while still being able to share their creations.

So that means an Skylander created in the console game and stored on a Creation Crystal can be shared socially and turned into a physical figure or an Imaginator Card by way of the app. To make this happen, the user needs to get that Imaginator from the console game to the app, which can be done all while keeping the console offline.

Even if you laugh at Skylanders and at custom figures, here's where things get undeniable awesome. The console game can transfer a character to the phone, not by way of the internet or Bluetooth, or Wi-Fi, or even NFC. Rather, the console game plays a series of audio cues, which the app picks up (using the device mic), decodes, and thereby re-creates the character. 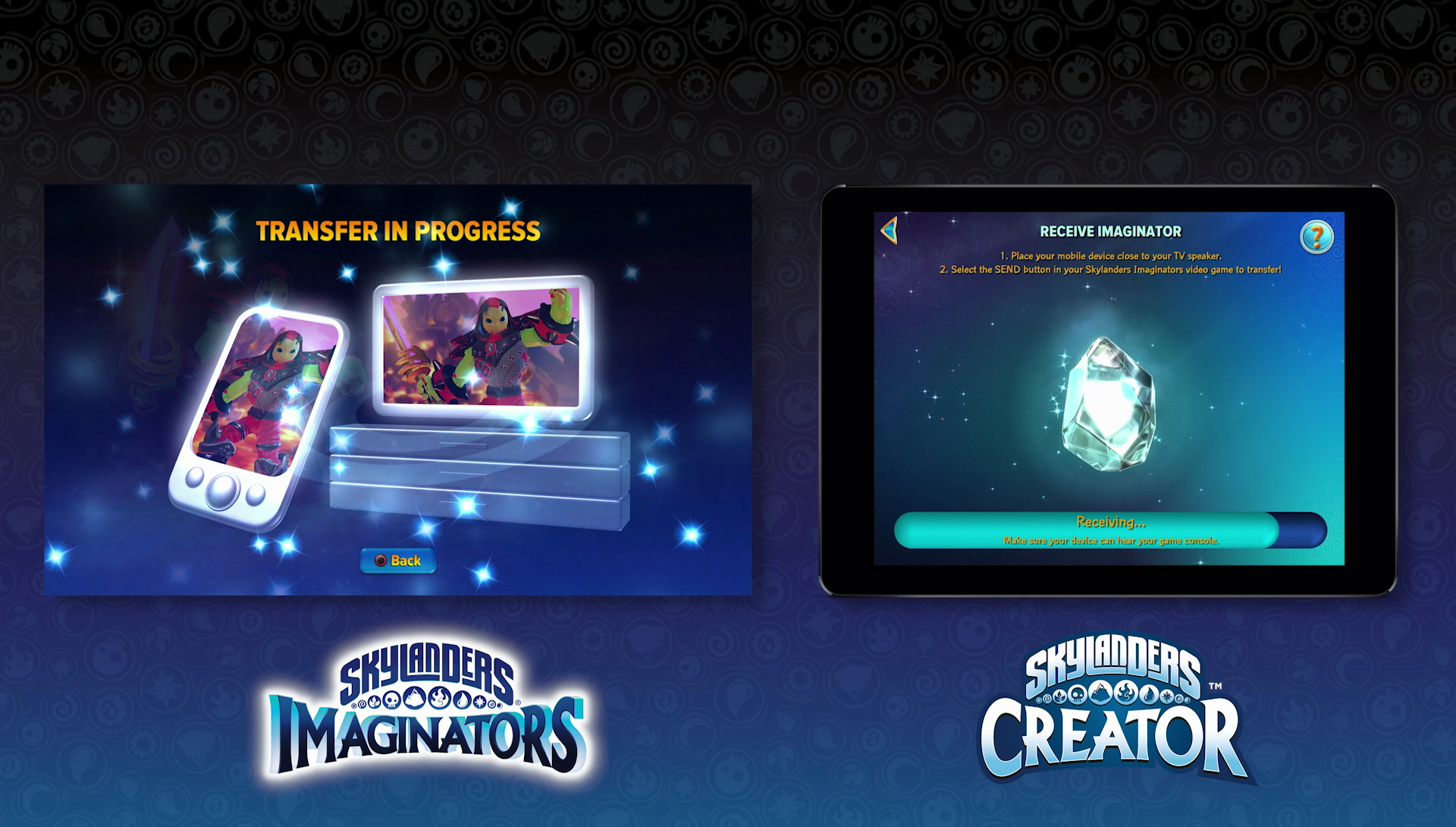 Seeing and hearing this process in action is extremely impressive in a "smarter not harder" kind of way. Using audio transmission as a means to carry the data is a solution that feels right out of 'The Martian.' But it's better than that.

Because a short audio clip can contain the data needed to re-create an Imaginator in the app, the global audience should have the means to share and exchange Imaginator character designs on a virulent level. A YouTube clip, a Twitter gif, a ringtone- it's all fair game for the community I suspect will blossom around competing and collaborative Skylander Imaginator designs.

This technique, which I can't help but identify with Willy Wonka's musical lock is, as announced, a one-way street. From the console game (or other recorded version) to the Skylander Creator app. For anyone who creates a character in app and then wants it on the console (short of ordering a figure or card), will need to re-create that figure in-game. 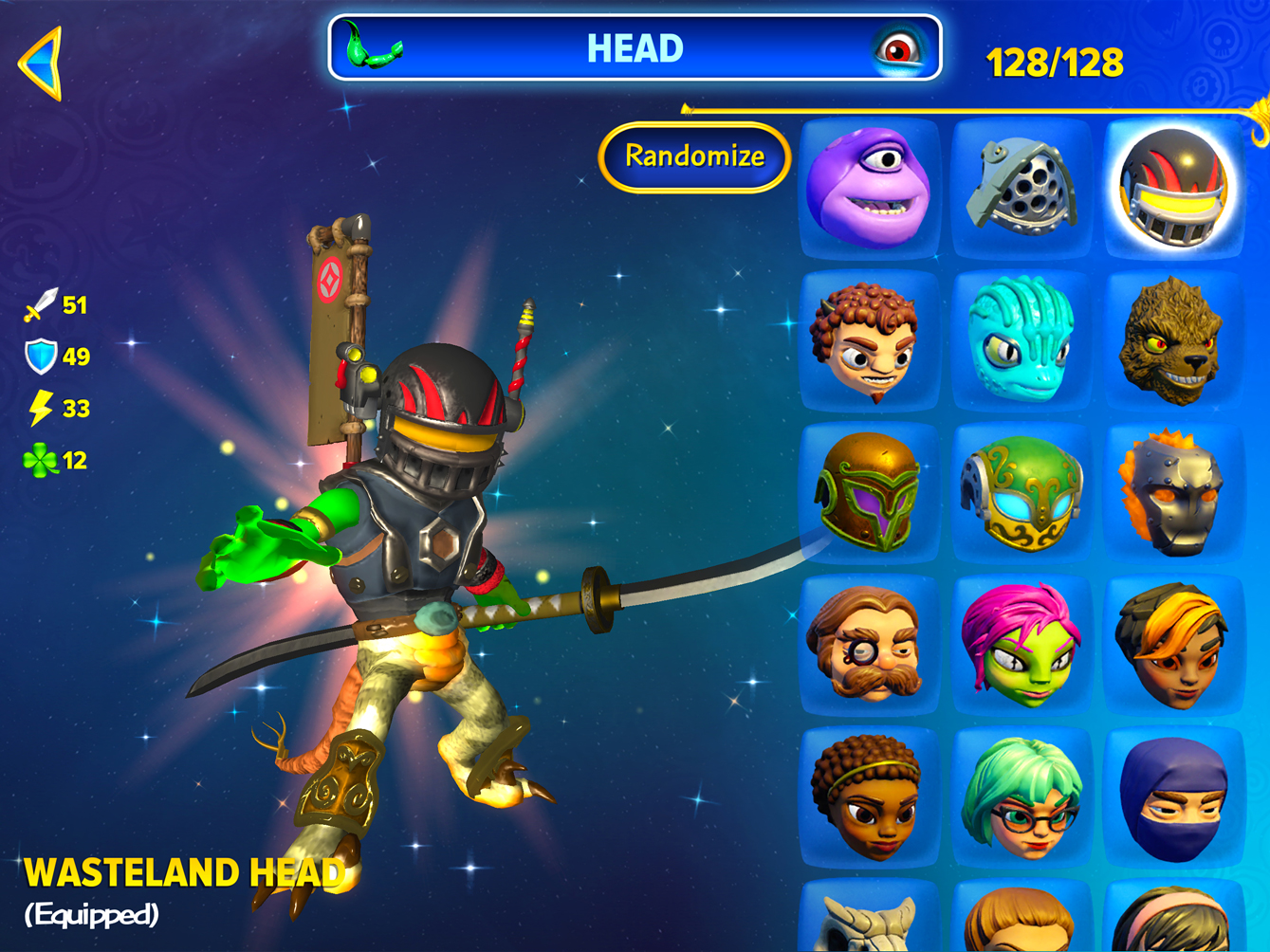 The free 'Skylanders Creator' app has been developed by Finger Food Studios, and they have also developed among other things, the 'Skylanders Collection Vault' app. I used the app on an iPhone 6, and much like it had been in the console game, the process was slick, but now aided by touchscreen control. (I was not able at that time to do anything like try to order a figure.) No doubt, Activision and Toys For Bob have been keeping the app's development and extensive function very close to the vest, but it is set to release on iOS and Android very soon, as in, on October 16, 2016 (North America), October 14, 2016 (Europe), and October 13, 2016 (Australia/New Zealand). Naturally, the physical merchandise aspect, with all of its custom splendor and presentation, (the Imaginator Card is sent in the mail along with letter from Eon!) is a major wow. (Can you imagine if they did this for other games, like say 'Destiny?') There is, however, more to the app. 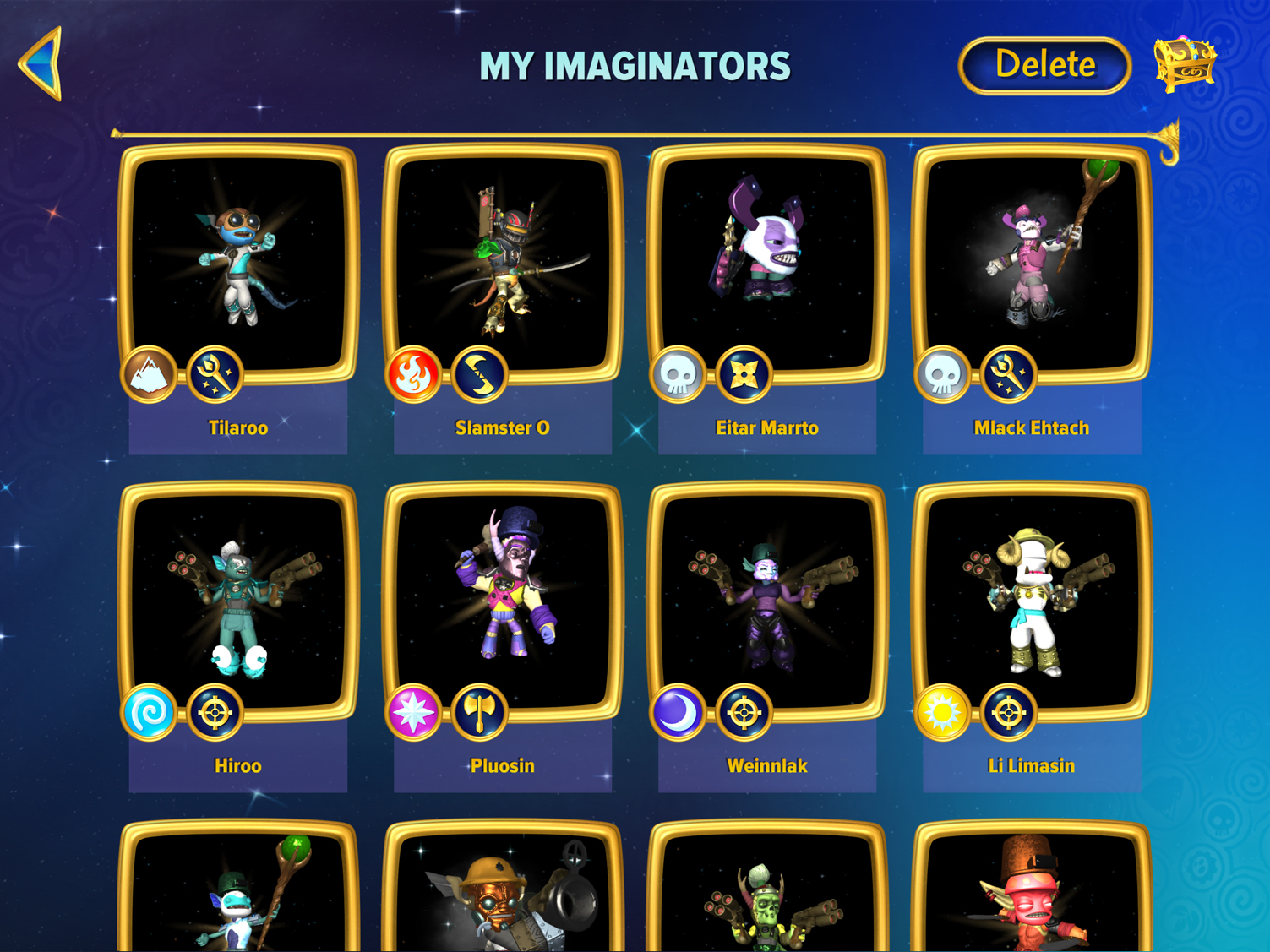 Using the app, players can quickly create an entire gallery of characters. These characters can be shared, and also can be viewed in interesting ways. (I hope Twitter can handle the massive incoming influx of Skylanders images.) And like with 'Skylanders Imaginators,' making characters involves selecting parts (like the snake heads hands that I used in my Dark Sentinel). The parts bin for each sub category is important, and in the console game parts are unlocked via Imaginite Chests which are acquired by doing things such as beating bosses, finding secrets, minigames, etc. Meanwhile, the 'Skylanders Creator' app has both Timed Imaginite Chests and Sensei Chests, which will give players unique parts. (It looks like the Chests will be tied to a daily/hourly frequency.) 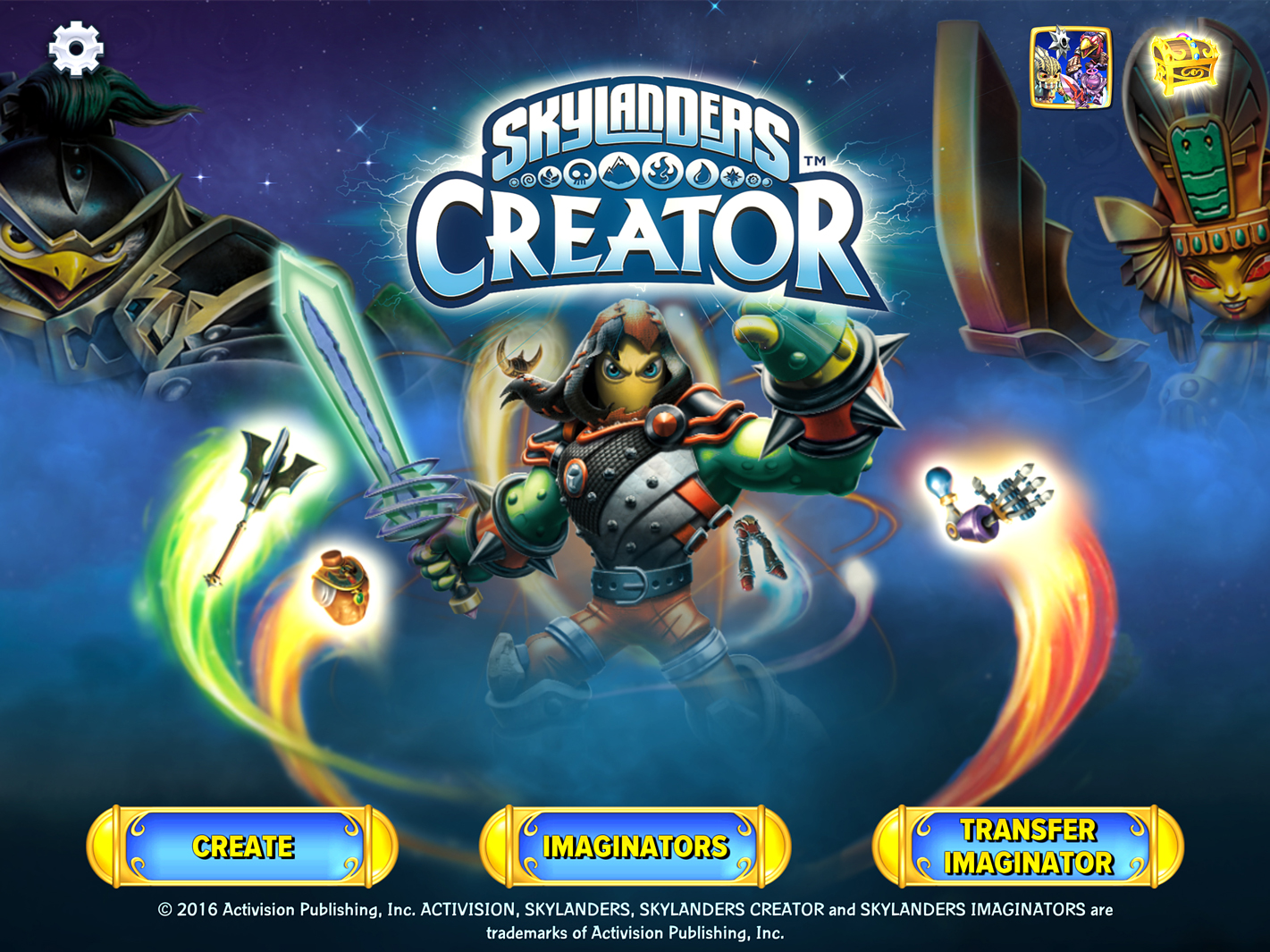 Here are some the announced devices that the 'Skylanders Creator' will support:

Built on the inherent, prevalent, and enduring charm of the 'Skylanders' character design, I can see kids (and adults) making millions of characters via the app, and that's just in 2016. 'Skylanders Creator' is an almost disarmingly simple name, but the potential rivals anything seen yet in the Toys-to-Life genre.

Activision has assembled a host of important partners in order to make these 'Skylander' creations worth the effort of ordering and owning. PBM Graphics will handle the Imaginator Cards, which at $14.99 a pop (free shipping within in North America), may wind up being the most popular by volume. These cards bear the likeness, name, catchphrase, and class/element of the character, and work with the Portal just like a normal figure in 'Skylanders Imaginators'.

And because these are Imaginators, they can continue to be customized in-game. As I mentioned before, the presentation of the Eon-penned letter delivered via physical mail, seems to convey a wonderfully retro feel for grandiose presentation. The cards themselves nail that physical, tactile, toys-to-life nature when used on the Portal, and it's been promised that their 2.5 x 3.5 inch will fit in a typical card sleeve.

For the shirts, Global Brand Solutions will do the printing on District Made Concert Tees (SanMar), which will come in kids and adult sizes. At $24.99 plus shipping these custom t-shirts aren't cheap, nor should they be. But after seeing some holiday themed examples, I can understand where even one 'Creator' app Skylander could wind up on lots of different t-shirts with different tweaks (like lack-o-lanterns and candy canes). That these shirts would seem to promise to convey the creativity of the person who made the character is a nice testament to the robust toolset.

Finally, Activision has tapped a 3D printing force in Shapeways to produce the $49.99 (free shipping within in North America) 3D Printed Imaginator Figures. These full color figures have a clear productive dome and are fully playable (just like the cards the figures can be played on the Portal with further in-game customization in 'Skylanders Imaginators). I got to handle a few examples, which were more dynamic than the one pictured here, and the product is impressive. At $49.99, these figures make the normal injection modelled characters look like an incredible value (one that is strong enough not to need a dome), but make no mistake, the level of demand expected is severe enough that several contests and promotions will be required just to pick the initial waves. I haven't yet seen the packing, but I'm expecting a presentation that will rival any merchandise in the gaming industry.

I think I could blather on about the app, the characters, and the custom character-based collectibles for days on end, but this should be enough to get that initial idea. Activision and Toys For Bob have ambitions and plans to bring Skylanders and Skylander fans to a new plateau, an undiscovered country. Once more, digital creations and physical toys are set to blow the doors off an unsuspecting world full of families looking to play together.